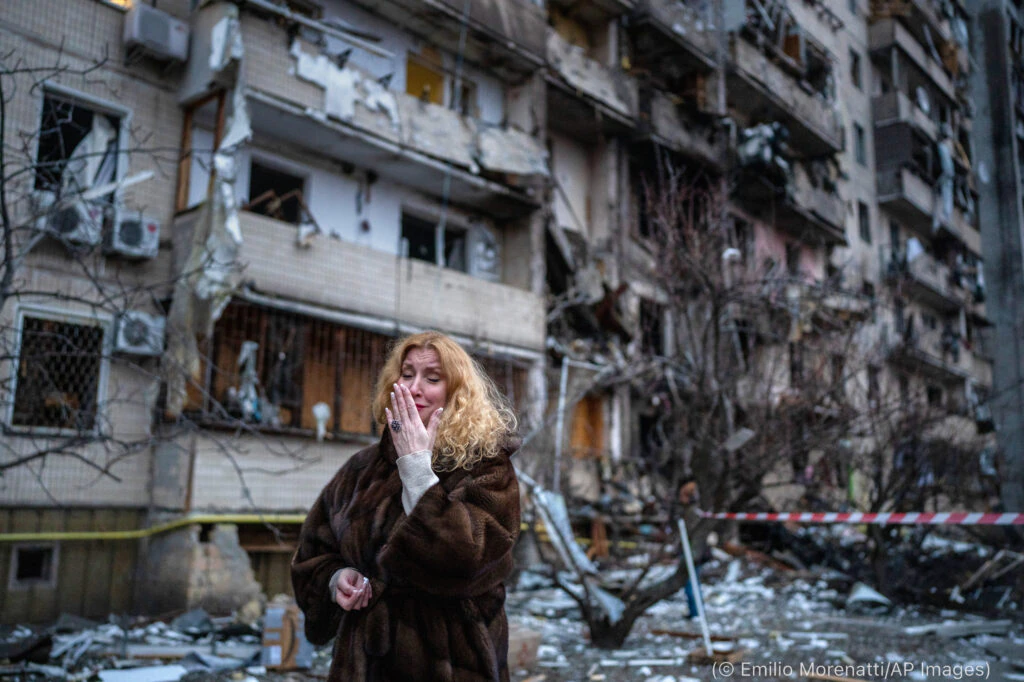 (© Emilio Morenatti/AP Images)
By Suzy Mast
[This photo gallery contains graphic images that might be disturbing to some viewers.]

Russian shelling has hit Ukrainians in their homes, hospitals and theaters and even while they were pushing their children in strollers down the street.

The United Nations estimated that as of July 24, the war has killed or injured more than 12,000 civilians in Ukraine since Russia’s full-scale invasion began February 24.

These images capture some of the toll that Putin’s brutal and unjustified war is having on people in Ukraine.

A woman stands next to her house after a rocket attack on Kyiv February 25, the first full day of the full-scale invasion.

Ukrainian emergency employees and volunteers carry an injured pregnant woman from a maternity hospital damaged by shelling in Mariupol March 9. The woman and her baby both later died.

A woman passes bodies covered with plastic sheets after a rocket attack killed at least 52 people April 8 at a train station in Kramatorsk in eastern Ukraine. Civilians were using the train station to try to evacuate the area.

The Donetsk Academic Regional Drama Theater in Mariupol is seen after Russian shelling April 10. At least 600 people died. Civilians had used the theater as a bomb shelter and clearly marked “children” on two sides of the theater. It was still hit.

A daytime attack on a crowded shopping mall in Kremenchuk June 27 killed at least 20 and injured dozens others, including the couple above who were being treated at a hospital.

Rescue workers search for survivors following July 1 Russian missile attacks on an apartment block and recreation center in Serhiivka, a town southwest of Odesa. At least 21 people died and 38 were injured.

A man grieves for his wife, killed during a July 1 Russian bombardment in a Kharkiv residential neighborhood. The city has been shelled for months. An estimated 600 civilians have been killed in Kharkiv since the invasion in February.

Relatives and friends pay their last respects during a July 17 church service in Vinnytsia for a 4-year-old girl killed by a Russian attack. She was among 23 people killed that day. Her death drew worldwide attention, as her mother had posted a video on social media of her pushing her own stroller moments before the blast.