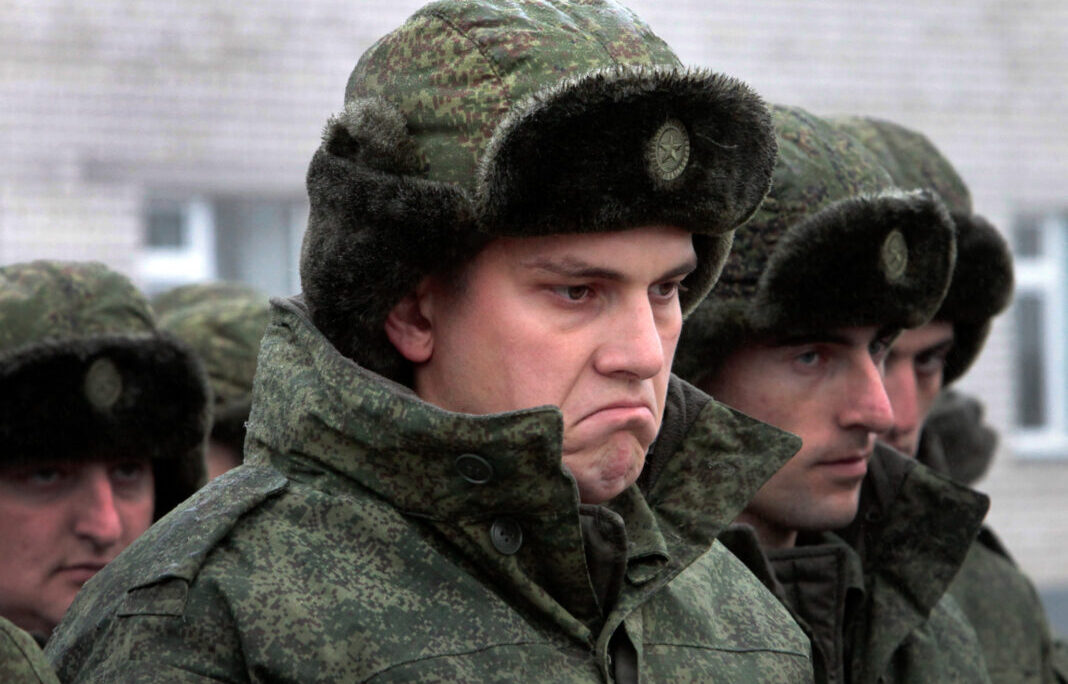 In this 2014 photo, conscripts stand at a military conscription office in Grozny, Chechnya's provincial capital, Russia. The Kremlin relies on conscripts in Ukraine.(© Musa Sadulayev/AP Images)

In its brutal war against Ukraine, Russia relies on conscript soldiers who are often unaware of their assignments and inadequately trained for combat, independent media reports indicate. Vladimir Putin insisted on several occasions that only professional soldiers and officers were involved in Russia’s “special military operation” in Ukraine and that conscripts would not be used. However, Russia’s defense ministry acknowledged on March 9 that it used conscript soldiers in Ukraine and that some were captured by Ukrainian forces.

All men in Russia between 18 and 27 years of age are required to serve in the military, but many obtain deferments to avoid conscription. “What kind of trust could there be if Putin says one day that conscripts will not be sent there … and then the Defense Ministry recognizes that they were there?” Alexei Tabalov, a lawyer who advises conscripts, told the Associated Press. Russia’s military includes 1 million troops, 400,000 of which are contract soldiers. Another 134,000 individuals were drafted into the military on March 31.

Soldiers, families in the dark

Some relatives of conscript soldiers said they do not know the whereabouts of soldiers fighting in Ukraine, according to Svetlana Golub, head of the Soldiers’ Mothers Committee, an advocacy group for soldiers’ rights in Russia. “The families are being completely left in the dark,” she told The Guardian. “I know the situation is really bad when the families tell me they can’t reach the soldiers any more.”

A Russian parliamentarian said one group of 100 conscripts was forced to sign contracts for military service and then sent to Ukraine into combat, according to the AP. Only four of them survived. The conscripts said commanders told them they were being sent for military training exercises only to discover they were going to combat zones inside Ukraine.

The Kremlin also forcibly drafts conscripts from parts of Ukraine that it controls or occupies from Russia’s 2014 invasion of Ukraine.

In the areas of the Donbas in eastern Ukraine that are under the Russian government’s control, an estimated 135 conscripts sent to fight in Mariupol put down their weapons in protest, according to Reuters. Their commanders put the soldiers in a basement as punishment and threatened them.

One student in Donbas was sent by the Russian military to Mariupol with no training and older rifles compared with those given to professional soldiers. His unit experienced heavy combat. Members of the unit drank water with dead frogs in it.

“There were lots of casualties,” he said. “I hate the war. I don’t want it, curse it. Why are they sending me into a slaughterhouse?”

Residents of Crimea have been forced to serve in the Russian military for the past eight years, ever since Russia occupied the region. Residents are threatened with prosecution if they fail to do so. Crimeans fighting for the Russian military against Ukraine were identified after being taken as prisoners of war.

The Kremlin also is looking to former Soviet countries and allies such as Syria for new recruits to fight a war that is lasting much longer than Putin had anticipated. Russia’s government is so desperate for troops it is offering expedited citizenship to immigrants as another tool. Kyrgyz natives living in Russia are being paid to fight the Kremlin’s war against Ukraine. Sardarbek Mamatillaev, a native of Kyrgyzstan, received Russian citizenship recently and was told to report for military duty. An estimated 30,000 Kyrgyz men who received Russian citizenship are eligible for conscription. “I was told I must report to the military office, otherwise my Russian citizenship could be canceled,” Mamatillaev told Cabar.asia.

Men who are eligible for military service in Russia must serve in the military even if they served in their native countries.

Putin also is relying on his ally, Syrian President Bashar al-Assad. Syria is recruiting troops from its military to fight with Russian soldiers in Ukraine. The recruits are promised $3,000 per month, which is substantially higher than their typical salary.