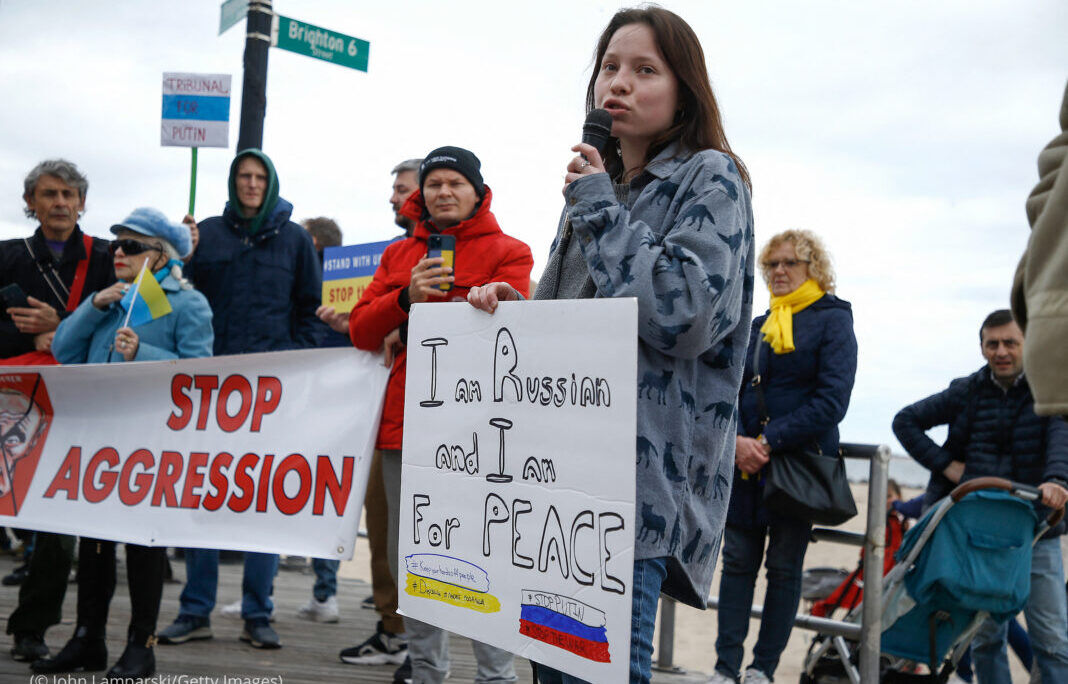 A speaker carries a sign during a demonstration in the Brighton Beach neighborhood of New York City in March. (© John Lamparski/Getty Images)

Walk the streets of Brighton Beach, Brooklyn, Queens and other areas in New York City and you’ll likely see signs in Russian and English, along with plenty of support for Ukraine.

New York City is home to 600,000 Russian-speaking immigrants, the most of any U.S. city. And many here — as well as others in communities across America — are aghast at what they see happening in Ukraine.

Alexander Korzun, who organized a rally in late March in Brighton Beach, told the Brooklyn Paper, “As Russians we do want to say that we are strongly against this war, we condemn Putin’s aggression and those who support this war. And we stand with Ukraine.”

He noted that his community was using “an opportunity to speak freely here in New York” to say what many in Russia are too afraid to say for fear of being arrested: that the war is wrong and must end.

Many residents of Brighton Beach and other neighborhoods left the Soviet Union starting in the 1970s and came to the New York City area fleeing religious and political persecution and pursuing new economic opportunities.

Long-time resident Leonid Pevzner told The Washington Post that he came to Brighton Beach 30 years ago. “I didn’t like where Russia was going economically, and I needed to find an opportunity to work.” Now Pevzner runs Brighton Care Pharmacy, just blocks from the beach, supporting his family and, like many other residents, staying in touch with family and friends back in Russia.

Across the decades, thousands settled in Brighton Beach, where they would find comfort in the diverse community, sharing culture and traditions from across all regions of the former Soviet Union. With a large percentage of the immigrant population coming from the Ukrainian Soviet Republic, the neighborhood got the nickname “Little Odesa,” after the Ukrainian port city on the Black Sea.

As the neighborhood grew, it began to feel like home. Russian and Ukrainian restaurants, Georgian bakeries, Orthodox churches, and international markets featuring homemade food and imported goods popped up on street corners.

Many also came to the New York City area knowing they would find community and stability among others speaking Russian, Ukrainian, Uzbek and Georgian, along with other languages of the former Soviet republics.

During the Soviet era, Russian was the primary language among the Soviet Union’s 15 republics, as imposed by Moscow, while many spoke one of the over 120 native languages of the USSR at home. Even today, less than a quarter of Brighton Beach residents were born within the United States, and thousands continue to migrate here from Russia and the surrounding nations each year.

Lisa Aronova, who came to the United States from Uzbekistan about 30 years ago, has seen the impact of Russian state media on populations in Russia. “They are lying, lying. Everything whatever they say, it is all lies. The normal, regular people who live there [in Russia], they don’t get all that information what we have,” she told National Public Radio in April while in Queens, a borough of New York City.

Donovan Richards, the Queens borough president, traveled to Ukraine in 2021 and has stayed in touch with people he met there. “To the Ukrainian-American community here in Queens, we firmly stand in solidarity with you against this invasion. If you need a space to gather or mourn, our doors at Queens Borough Hall are open. To the Russian-American families who call Queens home, we know this is not your war — it is Putin’s and Putin’s alone. You have our full support and love as well.”