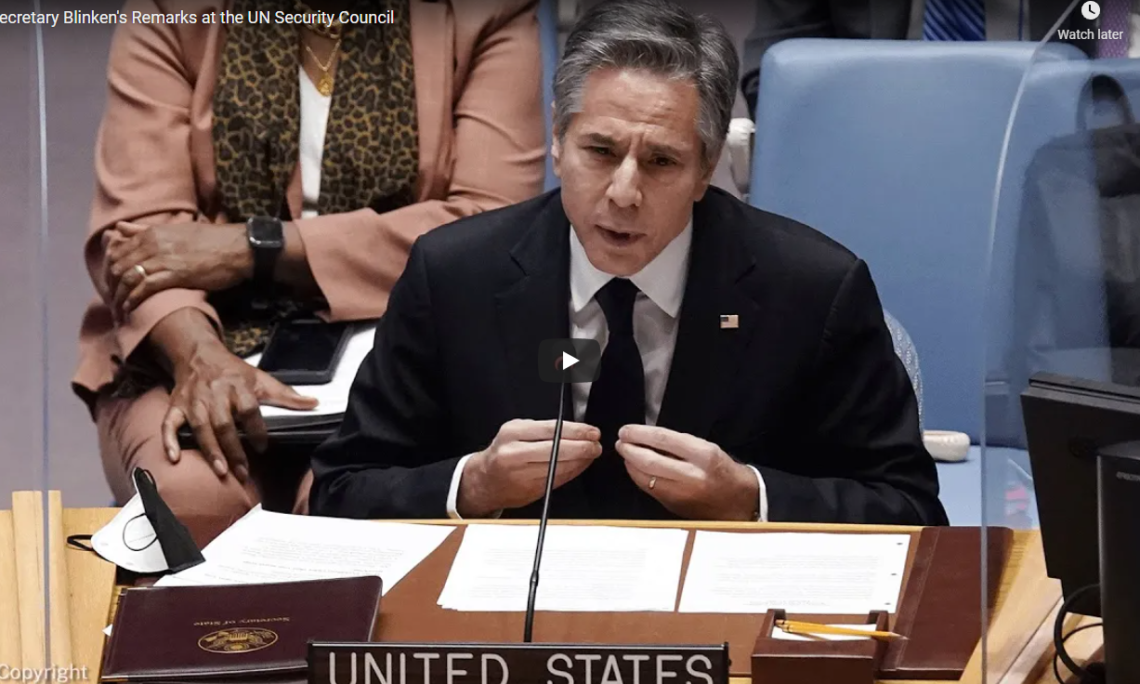 SECRETARY BLINKEN:  Mr. President, this council was convened today to discuss the implementation of the Minsk Agreements, a goal that we all share, despite Russia’s persistent violations.  These agreements, which were negotiated in 2014 and 2015 and signed by Russia, remain the basis for the peace process to resolve the conflict in eastern Ukraine.

This council’s primary responsibility – the very reason for its creation – is the preservation of peace and security.  As we meet today, the most immediate threat to peace and security is Russia’s looming aggression against Ukraine.

The stakes go far beyond Ukraine.  This is a moment of peril for the lives and safety of millions of people, as well as for the foundation of the United Nations Charter and the rules-based international order that preserves stability worldwide.  This crisis directly affects every member of this council and every country in the world.

This is the exact kind of crisis that the United Nations – and specifically this Security Council – was created to prevent.

We must address what Russia is doing right now to Ukraine.

Over the past months, without provocation or justification, Russia has amassed more than 150,000 troops around Ukraine’s borders, in Russia, Belarus, occupied Crimea.  Russia says it’s drawing down those forces.  We do not see that happening on the ground.  Our information indicates clearly that these forces – including ground troops, aircraft, ships – are preparing to launch an attack against Ukraine in the coming days.

We don’t know precisely how things will play out, but here’s what the world can expect to see unfold.  In fact, it’s unfolding right now, today, as Russia takes steps down the path to war and reissued the threat of military action.

First, Russia plans to manufacture a pretext for its attack.  This could be a violent event that Russia will blame on Ukraine, or an outrageous accusation that Russia will level against the Ukrainian Government.  We don’t know exactly the form it will take.  It could be a fabricated so-called “terrorist” bombing inside Russia, the invented discovery of a mass grave, a staged drone strike against civilians, or a fake – even a real – attack using chemical weapons.  Russia may describe this event as ethnic cleansing or a genocide, making a mockery of a concept that we in this chamber do not take lightly, nor do I do take lightly based on my family history.

In the past few days, Russian media has already begun to spread some of these false alarms and claims, to maximize public outrage, to lay the groundwork for an invented justification for war. Today, that drumbeat has only intensified in Russia’s state-controlled media.  We’ve heard some of these baseless allegations from Russian-backed speakers here today.

Second, in response to this manufactured provocation, the highest levels of the Russian Government may theatrically convene emergency meetings to address the so-called crisis.  The government will issue proclamations declaring that Russia must respond to defend Russian citizens or ethnic Russians in Ukraine.

Next, the attack is planned to begin.  Russian missiles and bombs will drop across Ukraine.  Communications will be jammed.  Cyberattacks will shut down key Ukrainian institutions.

After that, Russian tanks and soldiers will advance on key targets that have already been identified and mapped out in detailed plans.  We believe these targets include Russia’s capital –Ukraine’s capital, Kyiv, a city of 2.8 million people.

And conventional attacks are not all that Russia plans to inflict upon the people of Ukraine.  We have information that indicates Russia will target specific groups of Ukrainians.

We’ve been warning the Ukrainian Government of all that is coming.  And here today, we are laying it out in great detail, with the hope that by sharing what we know with the world, we can influence Russia to abandon the path of war and choose a different path while there’s still time.

Now, I am mindful that some have called into question our information, recalling previous instances where intelligence ultimately did not bear out.  But let me be clear: I am here today, not to start a war, but to prevent one.  The information I’ve presented here is validated by what we’ve seen unfolding in plain sight before our eyes for months.  And remember that while Russia has repeatedly derided our warnings and alarms as melodrama and nonsense, they have been steadily amassing more than 150,000 troops on Ukraine’s borders, as well as the capabilities to conduct a massive military assault.

It isn’t just us seeing this: Allies and partners see the same thing.  And Russia hasn’t only been hearing from us.  The international chorus has grown louder and louder.

If Russia doesn’t invade Ukraine, then we will be relieved that Russia changed course and proved our predictions wrong.  That would be a far better outcome than the course we’re currently on.  And we will gladly accept any criticism that anyone directs at us.

As President Biden said, this would be a war of choice.  And if Russia makes that choice, we’ve been clear, along with Allies and partners, that our response will be sharp and decisive.  President Biden reiterated that forcefully earlier this week.

There is another choice Russia can still make, if there is any truth to its claim that it is committed to diplomacy.

Diplomacy is the only responsible way to resolve this crisis.  An essential part of this is through implementation of the Minsk agreements, the subject of our session today.

There are a series of commitments that Russia and Ukraine made under Minsk, with the OSCE and the Normandy Format partners involved as well.

If Russia is prepared to sit with the Ukrainian Government and work through the process of implementing these commitments, our friends in France and Germany stand ready to convene senior-level discussions in the Normandy Format to settle these issues.  Ukraine is ready for this.  And we stand fully ready to support the parties.

Progress toward resolving the Donbas crisis through the Minsk Agreements can reinforce the broader discussions on security issues that we’re prepared to engage in with Russia, in coordination with our Allies and partners.

More than three weeks ago, we provided Russia with a paper that detailed concrete, reciprocal steps that we can take in the near term to address our respective concerns and advance the collective security interests of Russia, the United States, and our European partners and allies. This morning, we received a response, which we are evaluating.

Earlier today, I sent a letter to Russia’s Foreign Minister Sergey Lavrov proposing that we meet next week in Europe, following on our talks in recent weeks, to discuss the steps that we can take to resolve this crisis without conflict.  We are also proposing meetings of the NATO-Russia Council and the OSCE Permanent Council.

These meetings can pave the way for a summit of key leaders, in the context of de-escalation, to reach understandings on our mutual security concerns.  As lead diplomats for our nations, we have a responsibility to make every effort for diplomacy to succeed, to leave no diplomatic stone unturned.

If Russia is committed to diplomacy, we are presenting every opportunity for it to demonstrate that commitment.

I have no doubt that the response to my remarks here today will be more dismissals from the Russian Government about the United States stoking hysteria or that it has “no plans” to invade Ukraine.

So let me make this simple. The Russian Government can announce today – with no qualification, equivocation, or deflection – that Russia will not invade Ukraine.  State it clearly.  State it plainly to the world.  And then demonstrate it by sending your troops, your tanks, your planes back to their barracks and hangars and sending your diplomats to the negotiating table.

In the coming days, the world will remember that commitment – or the refusal to make it.  I yield the floor.