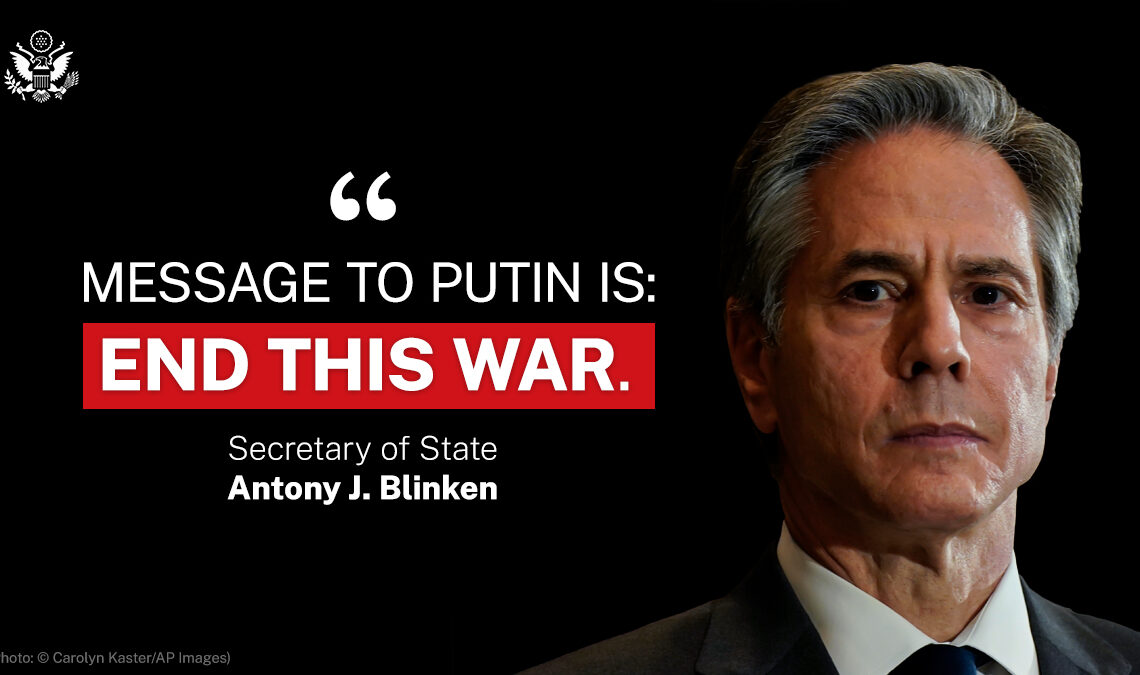 QUESTION:  Let’s discuss what’s going on with U.S. Secretary of State Antony Blinken.  Mr. Secretary, thank you so much for joining us.

QUESTION:  So I – as you well know, obviously, the President will attend this truly extraordinary meeting of all the NATO leaders next week in Brussels.  Is this purely a show of NATO strength, NATO force, or will they take new concrete steps to stop the Russian aggression?

SECRETARY BLINKEN:  Wolf, it’s a continuation of what we’ve been doing all along, which is bringing allies and partners together in support of Ukraine in very concrete ways, and to exert maximum pressure on Russia to stop the aggression that it’s committing.  And so the President has been in constant contact with his counterparts – from throughout Europe, NATO leaders, the European Union, et cetera, and around the world – but this is an important opportunity to have everyone in the same room, in the same place to continue to map out the strategy – the strategy that has, as I said, exerted incredible pressure on Russia as well as showing incredible support for Ukraine.

QUESTION:  I assume all 30 leaders of NATO will be there.  Just moments ago, President Zelenskyy signaled that Ukraine won’t join NATO anytime soon, saying – and I’m quoting him now as saying: for years we have been hearing about how the door is supposedly open to NATO membership, but now we hear that we cannot enter, and it is true and it must be acknowledged.*  That’s a quote from President Zelenskyy.  Is that a direct concession to Putin?

SECRETARY BLINKEN:  I don’t think that’s a concession.  I think, first of all, it’s a reflection of reality that even before this aggression by Russia, Ukraine was not going to get into NATO tomorrow.  All the more reason why, as we’ve seen, when Putin was saying that their concerns about Ukraine centered on its admission to NATO, that was wrong; that was a lie.  What this is about, what Putin’s demonstrated it’s about, is denying Ukraine its independent existence.  But what we’ve done in support of Ukraine is to provide extraordinary security assistance that continues as we speak to make sure that Ukraine has the means to defend itself.

QUESTION:  As the risk of miscalculation, though, grows, the UN secretary-general says that the prospect of nuclear – nuclear – conflict is now, and I’m quoting him now, “within the realm of possibility.”  How real is the risk of this spiraling into nuclear war?

SECRETARY BLINKEN:  Well, President Biden has been very clear that one thing is for sure, is that we’re going to avoid getting into any kind of conflict with Russia, and certainly avoiding anything that brings us to World War Three.  Some of Russia’s loose talk about its nuclear weapons is the height of irresponsibility and goes against everything that we’ve said, including that Russia has said over many years, about how a nuclear war is not winnable – something that was reaffirmed as recently as the meeting between President Biden and Putin back in – this summer in Geneva.

So we watch this very, very, very carefully.  There’s a lot of bad, loose talk and bluster.  At the same time, I have to tell you we have real concerns that Russia could use a chemical – a weapon, another weapon of mass destruction.  This is something we’re very focused on.  Unfortunately, we’ve seen them use or acquiesce to its use before in Syria, with Syria using these weapons, using them itself, trying to assassinate its opponents, including in the United Kingdom.  So this is something we are very focused on.

QUESTION:  Well, if they do use chemical weapons, what will the U.S. and the NATO Allies do?

SECRETARY BLINKEN:  We’ve been very clear, including with Russia, with others, that there would be a very serious response not just from us, but from the international community.  I’m not going to spell it out here, but the consequences would be severe.

QUESTION:  Russia is also targeting civilians; they’re attacking hospitals, schools.  Why is the White House so far refusing to come right out and say what the Russian – what the Russians are doing right now, that that’s a war crime?

SECRETARY BLINKEN:  We are documenting everything we’re seeing.  We welcome the efforts that are being made, including investigations conducted by NGOs and institutions to look at this, to put everything together to determine whether the acts that Russia is engaged in would constitute a war crime.  We’re looking at whether there are deliberate attacks on civilians.  There’s certainly very credible reports and evidence of that, but what we’re doing is putting it all together, documenting it, and the appropriate institutions will make that judgement.

QUESTION:  The U.S. believes China has signaled some openness to providing military support to Russia.  What’s your message, Mr. Secretary, to China as it weighs how much support it will actually provide to Putin?

SECRETAR BLINKEN:  Well, Wolf, there are two things.  First, there is the rhetorical support, or at least the absence of clear rhetorical denunciation by China of what Russia is doing.  And this flies in the face of everything that China purports to stand for, including the basic principles of the UN Charter, including the basic principle of respect for sovereignty of nations.  And so the fact that China has not denounced what Russia is doing in and of itself speaks volumes.  And it speaks volumes not only in Russia or in Ukraine; it speaks volumes in Europe and in other places around the world.

Second, we are concerned at the prospect of China providing material support to Russia or undermining the sanctions that we put in place with countries around the world, something that we’ve communicated directly to China, including just this – in the past 24 hours when the National Security Advisor, Jake Sullivan, met with his Chinese counterpart Yang Jiechi.

QUESTION:  So if the Chinese do provide military support to the Russians, what will the U.S. do?

SECRETAR BLINKEN:  Again, without going into specifics of what we’ll do, we’ve made very clear that that’s not something that we’re going to take sitting down.

QUESTION:  As you know, Putin is making truly outlandish and very, very offensive claims that he’s de-Nazifying Ukraine.  You and I both have family who survived the Holocaust; President Zelenskyy does as well.  Do you think the U.S. will look back on this time right now and wish the West had done more to stop Putin?

SECRETAR BLINKEN:  Wolf, it’s hard to project into the future.  I can tell you a couple of things, though, that I’m confident of.  First of all, there’s going to be a Ukraine, an independent Ukraine, a lot longer than there’s going to be Vladimir Putin.  One way or the other, Ukraine will be there, and at some point Putin won’t.  The real question is how much death and destruction is wrought by Russia’s aggression in the meantime, and that’s what we’re working as hard as we can to limit, to stop, to put an end to this war of choice that Russia is committing.

QUESTION:  So what’s your message to Putin right now?

SECRETAR BLINKEN:  Message to Putin is: end this war; stop this war that you’re committing; end the aggression that is unjustified, unprovoked.

QUESTION:  Sadly, he’s showing at least so far no sign of that.  But we will hope and pray. Secretary Blinken, thank you so much for joining us.

SECRETAR BLINKEN:  Thanks, Wolf.  Good to be with you.