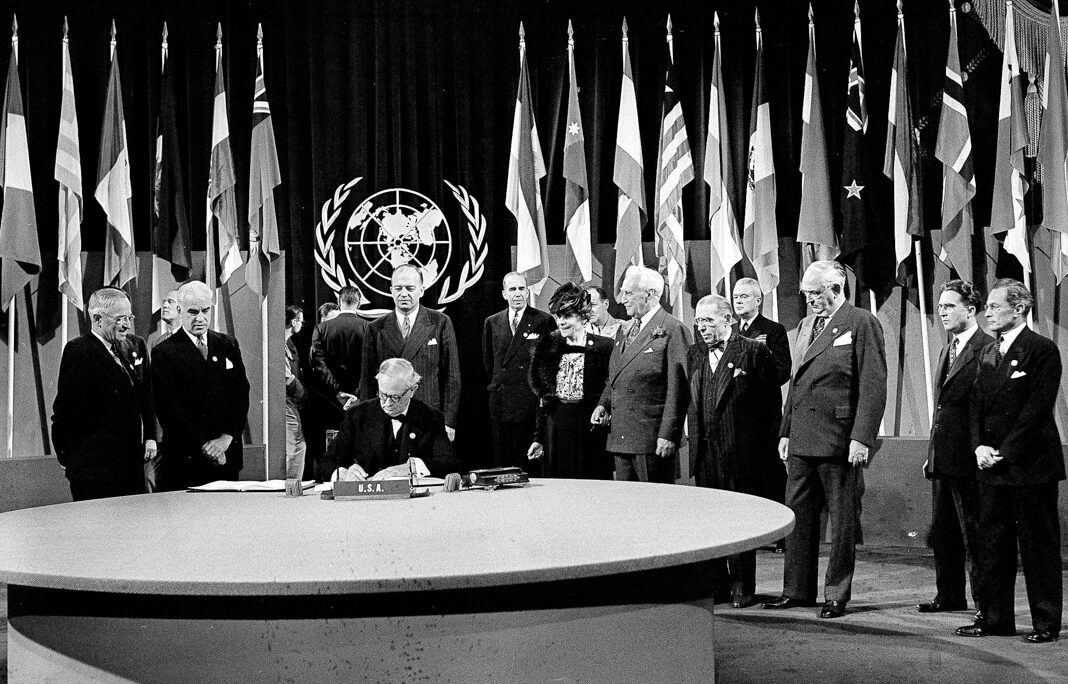 The Charter of the United Nations turns 75 (June 23)

When the Charter of the United Nations was signed on June 26, 1945, it set the stage for a post-World War II era dedicated to the resolution of international disputes by peaceful means.

Significantly, the U.N. charter — which entered into force on October 24, 1945 — was the first globally supported document that concerned itself with human rights. Its human rights provisions were strengthened three years later, in 1948.

Before the U.N. charter was signed, there were preliminary discussions at the Dumbarton Oaks estate in Washington. “Initial ideas for a peace organization were worked out by a group of [U.S.] legislators and Department of State officials,” the Washington Post reported on July 10, 1945.

But President Harry Truman wanted to involve ordinary citizens too.

In a telegram to Clark Eichelberger, director of a grassroots organization, Truman said that only if the American people “understand what the charter is and what it can mean to the peace of the world will the document become a living, human reality.” In response, Eichelberger launched an educational campaign that involved schools as well as business, labor and farm groups.

Public critique prompted changes to the Dumbarton Oaks proposals — changes made in San Francisco before the signing. Several members of Congress offered their input also, and “compromises to satisfy other countries had to be made,” according to the Washington Post. “The charter thus reflects a genuine meeting of minds through democratic processes,” it reported.

How the U.N. works

As a vehicle for countries to achieve collective solutions to disputes, the U.N. promotes negotiated settlements (sometimes with a skilled third party serving as mediator).

These functions all depend on the U.N. ensuring a multilateral world order by rejecting pressure to favor any particular nation.

Article 100 of the U.N. charter says: “The [U.N.] Secretary-General and the staff shall not seek or receive instructions from any government or from any authority external to the organization. They shall refrain from any action which might reflect on their position as international officials responsible only to the organization.”

Moreover, Article 100 obligates U.N. members to uphold the organization’s impartiality — “to respect the exclusively international character of the responsibilities of the Secretary-General and the staff and not to seek to influence them in the discharge of their responsibilities.”

Today, the U.N. includes almost every country in the world, with 193 members. Its success can be attributed in large measure to three factors.

First, the U.N. treats member states as equals, affording the same respect to all. This reduces the disparities among nations and provides smaller states multiple opportunities to voice their positions.

Second, U.N. resolutions apply to all members, and U.N. agencies provide help and funds according to commonly agreed-upon rules. Through its global norms, the U.N. can help members’ domestic constituencies understand how their governments can fulfill their international responsibilities.

Third, the U.N.’s leadership can have an impact on expectations about how states should behave in the international arena. Almost all governments wish to be seen as positive contributors to the system, and they routinely adjust their policies to accommodate global preferences as expressed by U.N. bodies.