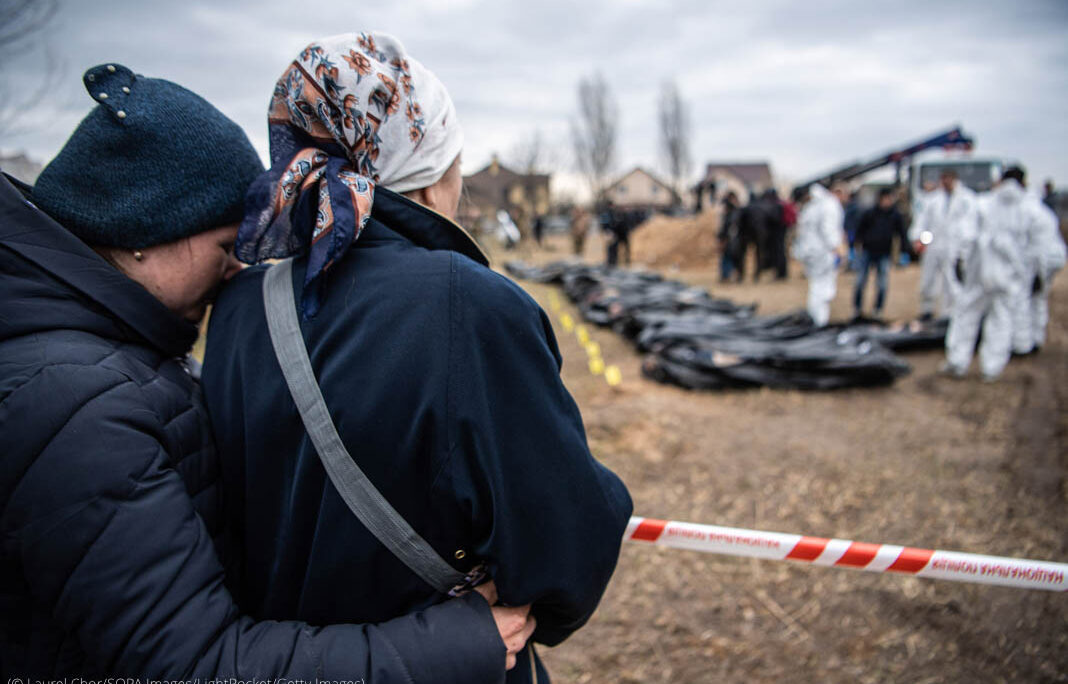 Women console each other as bodies are exhumed from a mass grave to be inspected for possible war crimes in Bucha, Ukraine, on April 8. (© Laurel Chor/SOPA Images/LightRocket/Getty Images)

After Russia’s forces withdrew from the Kyiv suburb of Bucha, city officials recovered hundreds of bodies from the streets and discovered a mass grave. In Mariupol, Russia’s bombs struck a maternity hospital and a theater sheltering children that was clearly marked with the word “дети” — Russian for “children” — in huge letters visible from the sky.

The Kremlin continues to spread disinformation in an effort to evade responsibility for atrocities committed by its forces in Bucha, Mariupol and other cities in Ukraine. Eyewitness and news accounts, as well as forensic investigations, show Russia’s forces are behind these heinous acts. Secretary of State Antony Blinken announced the U.S. government assesses that members of Russia’s forces have committed war crimes in Ukraine.

Blinken noted Putin’s forces are employing the same tactics in Ukraine as they did in Grozny, the capital of the Russian Federation’s Republic of Chechnya, and in Aleppo, Syria, using the “bombardment of cities to break the will of the people.”

When the Kremlin sent its military into Chechnya in 1999 to put down a separatist revolt, the intense bombardment by Russia’s forces  resulted in the death of thousands of civilians in the capital.

In 2008, when Russia’s forces invaded the independent neighboring country of Georgia, they used aerial, artillery and tank bombardments, killing and wounding civilians.

Then in 2014, after Russia seized Ukraine’s Crimean Peninsula, occupying troops and other Russian authorities subjected those who peacefully opposed the occupation, including members of the Crimean Tatar minority group, to killings and kidnappings.

In Syria, in 2019, Russia’s military forces, supporting Bashar al-Assad’s regime, struck medical facilities in Idlib and other cities. In May 2019, Russia’s bombing destroyed four hospitals in Syria in one 12-hour span, according to The New York Times.

The brutalities Russia’s troops are inflicting today on the people of Ukraine are just the latest examples in the shameful history of atrocities inflicted by Russia’s military. After Russian government officials sought to blame the March 16 bombing of the theater in Mariupol, Ukraine, that killed 600 civilians on neo-Nazis, Ukraine’s President Volodymyr Zelenskyy said Russia’s propagandists were resorting to “new old tactics” to evade responsibility.

“They are trying to distort the facts,” Zelenskyy said. “But, as then, they will not succeed. They will not be able to deceive the whole world.”