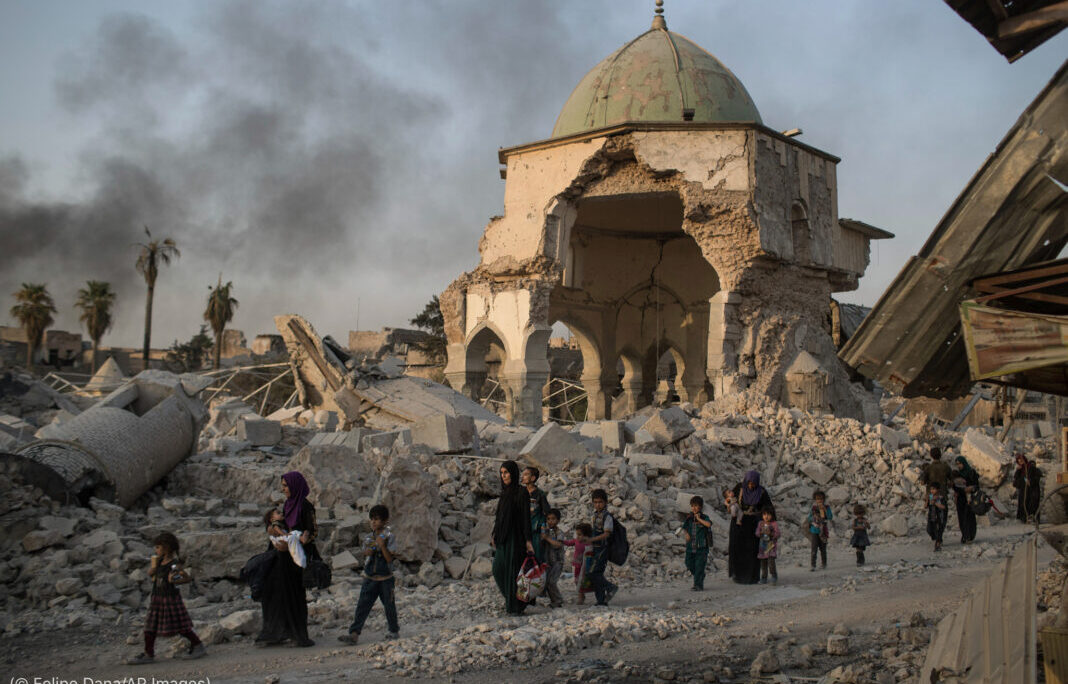 Fleeing Iraqi civilians walk past the heavily damaged al-Nuri mosque as Iraqi forces continue their advance against Islamic State militants in the Old City of Mosul, Iraq, Tuesday, July 4, 2017. As Iraqi forces continued to advance on the last few hundred square kilometers of Mosul held by the Islam

The editorial below, written by Omar Ghobash, assistant minister for culture and public diplomacy at the United Arab Emirates (UAE) Ministry of Foreign Affairs and International Cooperation, and Christopher Hodges, deputy assistant secretary of state for press and public diplomacy and assistance coordination in the U.S. Department of State’s Bureau of Near Eastern Affairs, describes a new initiative in the online fight against ISIS. It was published in English in Gulf News on May 27 and in Arabic in Al-Ittihad on the same day.

The Global Coalition to Defeat the Islamic State of Iraq and Syria (ISIS) toppled the group from its areas of territorial control in the Middle East, but since then ISIS’s “online Caliphate” has metastasized. Too often, we have seen ISIS and other extremists misrepresent religion and political grievances to serve their own ends, contributing to the destabilization of fragile states and causing untold suffering. The ideology that lured thousands of fighters to conflict zones continues to spur violence on a global scale, but for every successful attack, law enforcement thwarts many more. To defeat ISIS ideology, we must offer compelling narratives of tolerance, peaceful acceptance, and economic prosperity that counter extremists’ exploitation of religion and politics.

The United States and the United Arab Emirates established the Sawab Center in 2015 to expose the emptiness of ISIS’s hateful propaganda and advance the Global Coalition’s work. Sawab messages daily on Facebook, Twitter, Instagram, and YouTube in Arabic, English, and French. The Center reflects both countries’ robust partnership in the battle against violent extremism, and the need for it has never been greater. These sentiments of peace and tolerance represent the majority but can be drowned out in corners of the internet or media where extremist narratives thrive.

The precipitous growth in jihadist activity in sub-Saharan Africa is of particular concern. Violent extremist groups like Boko Haram and Islamic State in West Africa Province (ISWAP) cause grievous harm to the vast majority of people committed to peace and tolerance. According to the United Nations, in just over a decade these groups have killed 36,000 people and displaced two million from their homes. In several African countries, extremists are targeting humanitarian workers and disrupting efforts to stop the spread of COVID-19.

These jihadist attacks in Africa draw from and find their echoes in ISIS propaganda. Each week, ISIS’s propaganda leaflet “An-Naba’a” touts the bloody toll of ISWAP’s operations, in a desperate attempt to stay relevant and motivate violent attacks throughout the world.

To help amplify local voices that speak out against jihadist activity in sub-Saharan Africa, the Sawab Center launched a five-day messaging campaign on March 7 with the hashtag #AfricaAgainstExtremism. The campaign highlighted inspirational stories of the struggle against extremism, including excerpts of documentaries and films depicting the struggle against extremism. It stressed the positive role African youth can play in determining their countries’ future.

.@SawabCenterEN, a collaboration between UAE's @MoFAICUAE and the State Department, has been combatting extremist propaganda and disinformation since 2015. #AfricaAgainstExtremism is a new initiative to promote hope, tolerance, and the resilience of Africans against extremism. https://t.co/8Ilg3uooOZ

Sawab’s Africa campaign, and its messages of tolerance and peaceful co-existence, reflect deeply held values shared by the United States and the UAE that contradict the jihadist agenda. ISIS reduced Mosul to ruins, but the UAE has been at the forefront of promoting reconstruction and cultural preservation there, from the Al-Nuri Mosque to the Al-Tahira and Al-Saa’a churches. The Pope’s visit to Iraq in early March builds on his visit to Abu Dhabi in 2019, where he signed the Document on Human Fraternity with Sheikh Ahmed el-Tayyeb, the Grand Imam of Egypt’s Al-Azhar and former president of Al-Azhar University, the Sunni world’s most prestigious center for theological study. The Abrahamic Family House, now under construction in Abu Dhabi, will co-locate a church, synagogue, and mosque on the same plot of land. That initiative complements the historic normalization of the UAE’s relations with Israel.

Online messaging is just one part of the toolkit in countering violent extremism, but it remains vital to contest the online spaces that extremists are trying to exploit. Through international partnerships, combined operations, information sharing, and educational campaigns, the UAE, the United States, and other like-minded partners are countering terrorist propaganda, preventing youth from becoming radicalized, and equipping communities with the tools to fight extremism. This multilateral and multi-dimensional approach has been central to impeding extremist movements and stopping acts of terrorism that destabilize our societies and threaten the security and welfare of our peoples.

The effort to forge global solidarity and consensus against ISIS’s hateful agenda continues. Join us and become one of the Sawab Center’s more than 8.2 million followers. In our shared struggle against extremism, your help can make all the difference.