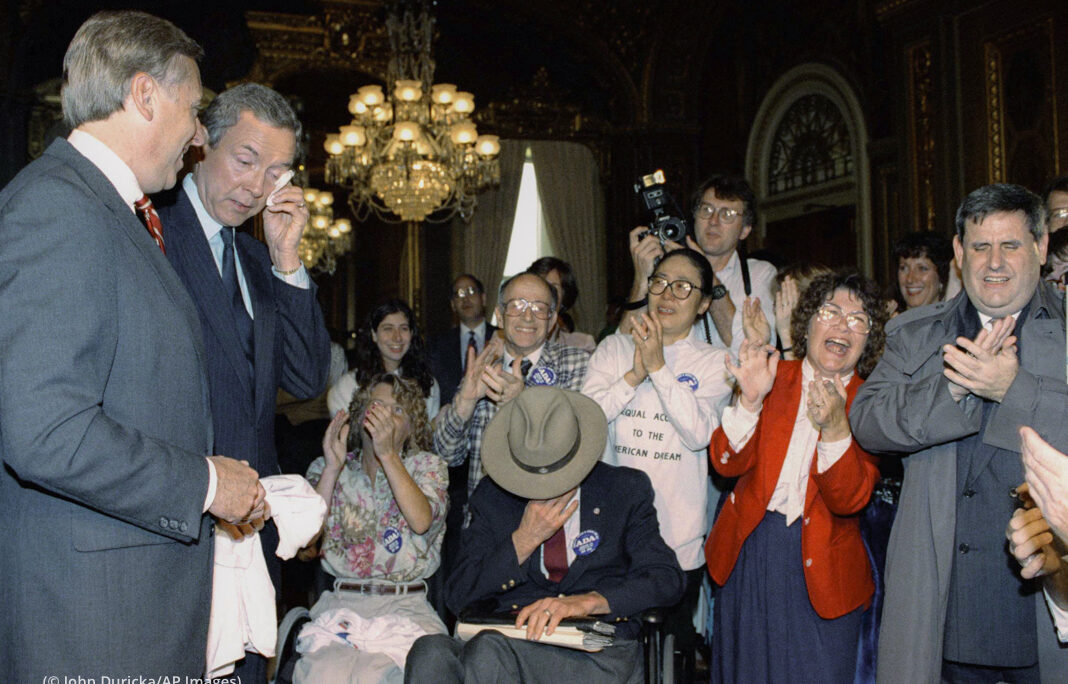 Rep. Steny H. Hoyer, D-Md., left; Sen. Orrin Hatch, wiping a tear of joy and Justin Dart, head of the Presidentís commission on employing people with disabilities, in cowboy hat, show their emotions while celebrating the passage of a bill guaranteeing a full range of civil rights for disabled Americ

Two years before joining the president for that signing ceremony, Carl had gone to a movie theater in her town, and the manager had refused to admit her because of her disability and use of a wheelchair. The manager reportedly said, “I don’t want her in here, and I don’t have to let her in.”

“Lisa Carl … now will always be admitted to her hometown theater,” Bush said at the ceremony. Thanks to the law Bush signed, behavior like the theater manager’s has been illegal in America for 30 years.

The ADA, one of the world’s most comprehensive pieces of civil rights legislation, functions as an equal opportunity law for 40 million Americans by protecting three groups of people: those with physical or mental impairments that substantially limit one or more major life activities, those with a history of such an impairment or those who are perceived by others to have an impairment.

ADA outlaws discrimination in all areas of public life, ensuring that the rights of people with disabilities will be respected and enabling full participation in society — by working, going to school, using public and private transportation, voting, buying goods and services or accessing public places.

The 1990 law made all of that more possible by striking down physical, or architectural, barriers from most buildings and facilities. It mandates that restaurants, grocery stores, schools and theaters be made accessible. It also covers most modes of transportation, such as trains, ferries and buses.

People with disabilities played a big role in getting the law enacted. Disability organizations documented personal stories of discrimination. People with disabilities and their advocacy groups testified before Congress. So did members of the legislative and executive branches of both the federal and state levels of the government.

Amendments to the ADA since its passage cover places like playgrounds, amusement parks, swimming pools and mini golf courses. The law compels companies to make medical diagnostic equipment — such as exam tables, dentist chairs, X-Ray machines — accessible to minimize the transfer distance between such furniture and someone in a wheelchair.

What led to the ADA and how it works

At times, progressive laws in the U.S. are passed by states — often referred to as laboratories of democracy — before the Congress considers them. At other times, as in the case of the disabilities laws, Congress passes narrow measures that first apply to federal government workers only. As such small experiments succeed, they boost the chances for broader legislation.

The Education of All Handicapped Children Act of 1975 (later renamed the Individuals with Disabilities Education Act) granted children with disabilities the right to a free, appropriate public education, in the least restrictive environment. The Fair Housing Act of 1968 was extended in 1988 to protect people with disabilities from discrimination in that area.

But Capozzi says there were no protections against discrimination for people with disabilities in the private sector or guarantees that all state and local government buildings or programs would be made accessible.

The ADA — inspired by the landmark Civil Rights Act of 1964, which outlaws discrimination based on race, color, religion, sex and national origin — brought wider protections. “It’s not just a paper tiger,” Capozzi says of the ADA. “it’s both very comprehensive but also has a pretty vigorous enforcement mechanism.”

If anyone believes they have been discriminated against, they can file a federal complaint with the U.S. Department of Justice and, depending on state law, a complaint or lawsuit in the state. Guilty defendants typically must make an accommodation or rectify an employment issue and, in some cases, must pay penalties.

“The ADA is a dramatic renewal not only for those with disabilities but for all of us, because along with the precious privilege of being an American comes a sacred duty to ensure that every other American’s rights are also guaranteed,” Bush said at the signing ceremony.