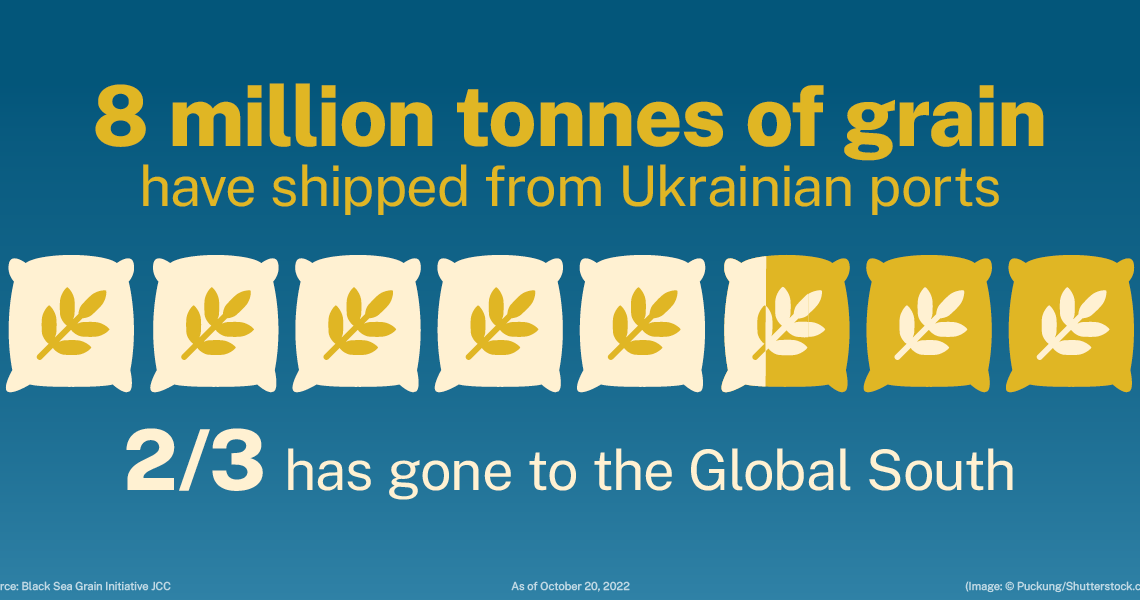 More than 8 million metric tons of Ukrainian grain and other food products have been shipped throughout the world since August. The shipments are the result of the U.N.’s Black Sea Grain Initiative, a deal brokered by Türkiye and the United Nations in late July between Ukraine and Russia to resume Ukrainian agricultural exports via the Black Sea. Prior to Russia’s February 24 invasion, Ukraine shipped 6 million metric tons of grain a month.

With U.S. assistance, the U.N. World Food Programme recently made Ukrainian wheat shipments to the Horn of Africa and to Yemen — areas suffering severe droughts and conflicts. Two-thirds of the wheat exported under the initiative is going to developing countries in Latin America, Asia, Africa and Oceania. Other countries destined to receive Ukrainian food products include Afghanistan, Bangladesh, Djibouti, India, Libya and Tunisia.

The volume of maritime traffic from Ukraine’s ports increases daily. The U.N.’s Black Sea Grain Initiative website regularly updates vessel movements from Ukraine. The 8 million metric tons figure is as of October 20. Humanitarian officials warned that a global food crisis is worsening because of climate change, armed conflicts and supply chain disruptions from COVID-19. But Ukraine’s increasing grain exports are a source of hope. Food prices dropped for the sixth consecutive month in September, according to the U.N.’s Food Price Index.

“We are more or less at pre-war levels of prices,” Rebeca Grynspan, who heads the U.N. Conference on Trade and Development, told Barron’s magazine on October 3.