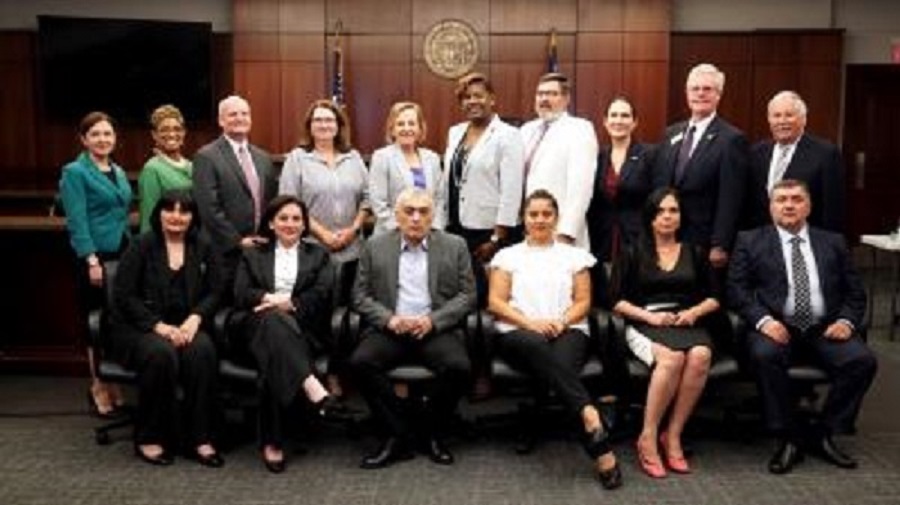 Six trial judges from Georgia visited Cobb Superior Court the week of August 15, 2022, to observe jury trials and study our judicial process. The visit marks the post-pandemic resumption of a cooperative effort that has been ongoing since 2017 between the Georgian judiciary, the U.S. State Department’s Bureau of International Narcotics and Law Enforcement Affairs (INL), the U.S. Justice Department’s Office of Overseas Prosecutorial Development, Assistance and Training (OPDAT) and the State of Georgia’s Administrative Office of the Courts (AOC). The program was developed as an initiative to promote the transparency and independence of the Georgian judiciary, to assist their judiciary in court and jury trial management, and to strengthen the rule of law in the Republic of Georgia.

The U.S. Embassy in Tbilisi, Georgia is assisting the Georgian judiciary by conducting a series of activities to help support this effort. Senior Superior Court Judge Jim Bodiford put together a team that includes Superior Court Judge Ann Harris and Senior State Court Judge Ben Studdard. “We are delighted to continue this important work with our Georgian colleagues. Strengthening the jury trial process brings greater transparency to a judicial system and fosters the independence of the judiciary. Both are hallmarks of a free and just society,” said Judge Harris.

During this latest visit, the Georgian judges not only observed several days of a murder trial in Cobb Superior Court, but they also had an opportunity to consult with local judges about judicial ethics and independence. “We can try to explain to folks how we judges manage our court business, and in particular our jury trials, but a real life demonstration, like a picture, is worth a thousand words” states Judge Harris. “It’s a bit like the difference between going to law school and actually practicing law.” The Georgian judges also met with local prosecutors and defense attorneys to discuss professionalism, and with Jury Administrator Wendy Portwood regarding the process of juror summons, excusals and deferrals. They enjoyed the hospitality of the Cobb County Bar Association at their monthly luncheon, which featured, appropriately enough, a menu of barbecue, cornbread and sweet tea.

In prior years, the team of local Georgia state judges has spent time in Georgia, observing court proceedings, consulting with their counterparts, and providing training on a variety of judicial and courtroom management subjects. They hope to return to the county of Georgia late this year or early next year.

Since gaining their independence from the former Soviet Union in 1991, Georgia has made great strides in developing a criminal justice system modeled after the U.S. system. “While our criminal justice system is not perfect, we do have some 250 years of steadily working to improve the practice and procedure of jury trials in this country. Our hope is some of our experience –both good and bad – will be useful to the Georgian judiciary as they work to strengthen their own jury trial process. We have all been impressed with the great progress the Georgians have made in such a

short time in implementing jury trials in their country, and we look forward to continuing our partnership with them.”