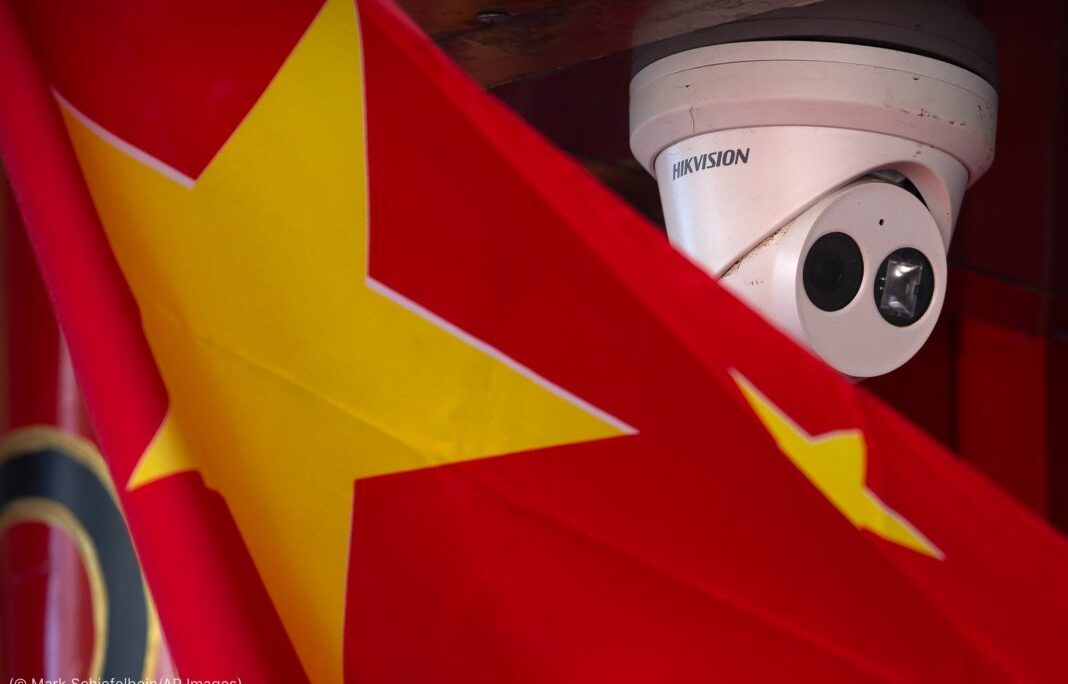 The flag of the People's Republic of China hangs near a security camera manufactured by Hangzhou Hikvision Digital Technology, a producer of video surveillance products for civilian and military purposes, outside a shop in Beijing in October 2019. (© Mark Schiefelbein/AP Images)

Beijing “is increasingly exploiting United States capital to resource and to enable the development and modernization of its military, intelligence and other security apparatuses,” Trump said in a November 12 executive order.

The order deems the People’s Republic of China’s military-industrial complex an “unusual and extraordinary threat” to U.S. national security, foreign policy and economy and declares a national emergency to address that threat.

The action prohibits U.S. individuals and entities from conducting transactions in publicly traded securities of companies the U.S. government has designated “Communist Chinese Military Companies.” The order also prohibits transactions in securities that are derivative of or otherwise related to such securities.

The 31 companies designated to date include the China Communications Construction Company, which is advancing the PRC’s military expansion into the South China Sea, and the telecommunication firm Huawei, which U.S. officials say poses significant risks to global data integrity and privacy and facilitates Beijing’s repressive policies in Xinjiang province.

“Many of these companies are publicly traded on stock exchanges around the world, and individual investors in the United States can unknowingly provide funds to them through passive institutional investment vehicles such as mutual funds and retirement plans,” U.S. National Security Advisor Robert O’Brien said in a November 12 statement.

The executive order notes that through its national military-civil fusion strategy, Beijing compels civilian Chinese companies to support its military and intelligence activities. Chinese companies are required by law to comply with PRC demands to turn over technology and information to which they have access.

The prohibition on transactions in securities related to designated companies will go into effect January 11, 2021, and companies and investors will have until November 2021 to divest their portfolios that existed before the order.

In July and August, the U.S. Department of State urged universities and businesses to divest from Chinese companies that contribute to CCP human rights abuses and intellectual property theft.