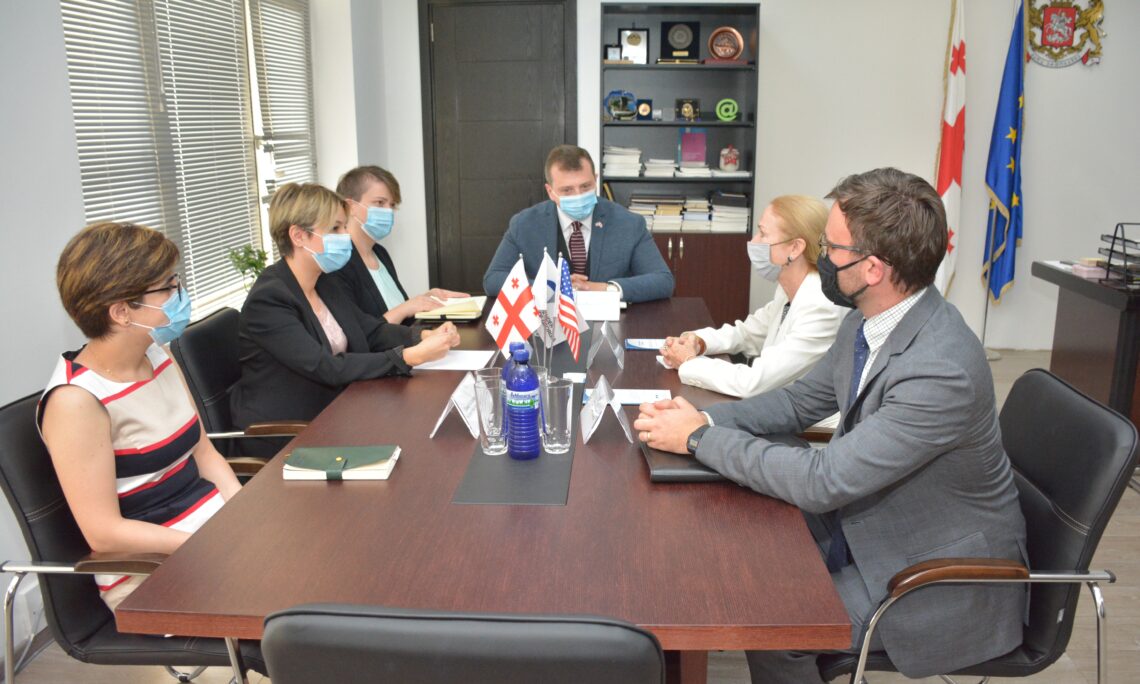 Ambassador Degnan: Gamarjobat! I had a truly inspiring meeting with Public Defender and her team. The work they are doing here, the very important monitoring role that this office provides, is at the very heart of Georgia’s democratic development, its evolution and its health. It is a tough role, but the feedback they provide is done in a way that is meant to provide the public with accurate, balanced information that the public needs in order to really understand what is going on. And in a country that has a judiciary that is still very much evolving and is not able to function independently always, it is so important to have this truly independent office of the public defender, and I say nothing other than to commend the Public Defender and her team’s work and their commitment to Georgia’s democratic future.

Q-n: about the occupation, ongoing kidnappings of Georgians, creeping occupation and the involvement of the West

Ambassador Degnan: It is a very important issue. Probably one of the fundamental issues here is to restore Georgia’s integrity, sovereignty and territorial independence, something that the United States strongly supports. We encourage the Geneva international discussions to continue. I know there’s an effort to have face to face discussions later this fall. I think the effort to revitalize, reactivate the IPRM is also an important step, so that these detentions that have been happening can be resolved quickly on the ground, without subjecting Georgian citizens to the kind of detention and harassment that they’ve been receiving. So again, this is very important. I think there are mechanisms in place to address these issues. We just need to be able to get Russia to fulfill its ceasefire obligations under the 2018 agreement. Everything exists to resolve this. It is simply a matter of Russia complying with its obligations.

Ambassador Degnan: I believe the Foreign Minister has already responded to that and addressed that, but what I would emphasize is that the United States is very concerned about what is happening on the Azerbaijan-Armenia border, and this is the kind of conflict that is very dangerous and needs to be addressed. There are also mechanisms to address that through dialogue and diplomatic means. We encourage that to happen before there is any kind of misunderstanding that could lead to more fatalities. But what has already happened there is tragic, and I hope they will be able to resolve this through diplomatic discussions.

Q-n about possible provocations from Russia during the election period;  especially in light of the upcoming military exercises “Caucasus 2020” planned in September and the same thing happened in 2008.

Ambassador Degnan: Just reading the news in the last few weeks and months, the number of countries, credible reports that have come out about Russian interference in elections, whether it is in the UK, whether it is in the United States, new ones today, the Scottish referendum, possibly Brexit. It is clear this is a pattern and as we have discussed before, Georgia is an obvious target for that kind of interference. I do feel the Georgian public is pretty sophisticated in identifying this kind of Russian provocation and disinformation, but it is very sophisticated, and it is getting more and more so, over time. The U.S supports programs and initiatives here in Georgia that help develop the public’s ability to discern fact from fiction, to become more critical in reading the news, so that they can better identify what is accurate information and what is put out there to confuse the situation. But clearly, it is a very polarized environment right now in Georgia, and I am sure that those who want to destabilize this country or create a confusion around the election are going to make full use of that.