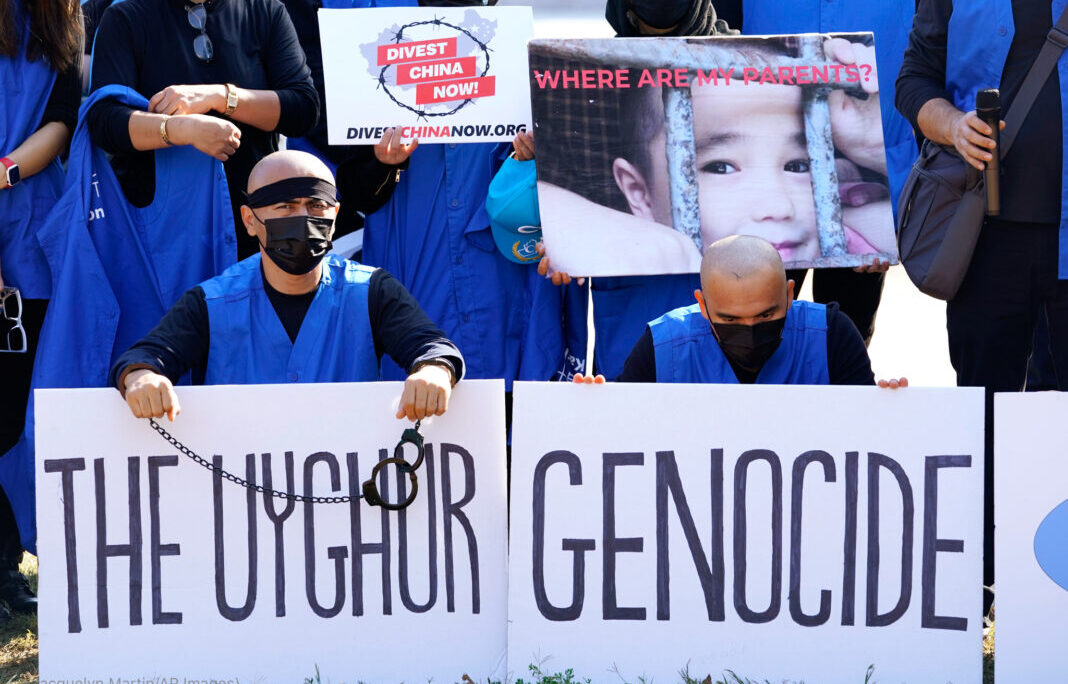 Members of the Uyghur American Association rally in front of the White House, Thursday, Oct. 1, 2020, after marching from Capitol Hill in Washington, in support of the Uyghur Forced Labor Prevention Act which has passed the House and now will go on to the Senate. The bill prohibits some imports from

The United States and international partners are imposing sanctions against senior People’s Republic of China officials for serious human rights abuses against Uyghurs in Xinjiang.

On March 22, Secretary of State Antony Blinken announced the Global Magnitsky sanctions issued in concert with Canada, the United Kingdom and the European Union against top officials with two PRC entities that carry out Beijing’s repressive policies against Uyghur and other predominantly Muslim ethnic minorities in Xinjiang.

“Amid growing international condemnation, the PRC continues to commit genocide and crimes against humanity in Xinjiang,” Blinken said in a statement. “We will continue to stand with our allies around the world in calling for an immediate end to the PRC’s crimes and for justice for the many victims.”

The U.S. is designating two People’s Republic of China officials under our Global Magnitsky sanctions in connection with serious human rights abuses in Xinjiang. We stand united with the UK, Canada, and the EU in promoting accountability for those who abuse human rights.

Since 2017, the PRC has interned more than 1 million Uyghur and other Muslim minority group members in camps in Xinjiang. The campaign of repression subjects Uyghurs to forced labor and mass surveillance, as well as the sterilization of minority women, according to rights groups.

“The evidence of widespread human rights abuses in Xinjiang cannot be ignored,” British Foreign Secretary Dominic Raab said in a March 22 statement, announcing sanctions against four senior officials with the XPSB. “Working with our international partners we are imposing targeted sanctions to hold those responsible to account.”

Canadian Foreign Minister Marc Garneau called on the PRC to end its systematic campaign of repression against Uyghurs. “We remain deeply concerned by the egregious human rights violations that are taking place in Xinjiang at the hands of the Chinese state,” he said in a March 22 statement.

The EU, U.K. and Canada also sanctioned several PRC entities or officials already under U.S. sanction, including the XPCC and Zhu Hailun, a former deputy party secretary in Xinjiang.

The sanctions freeze assets of officials and entities and preclude travel to the U.S., U.K., EU or Canada. Citizens of the sanctioning countries may not conduct business with sanctioned entities.

“We are united in calling for China to end its repressive practices against Uyghur Muslims and members of other ethnic and religious minority groups in Xinjiang,” Blinken, Raab and Garneau said in a March 22 joint statement. “We will continue to stand together to shine a spotlight on China’s human rights violations.”