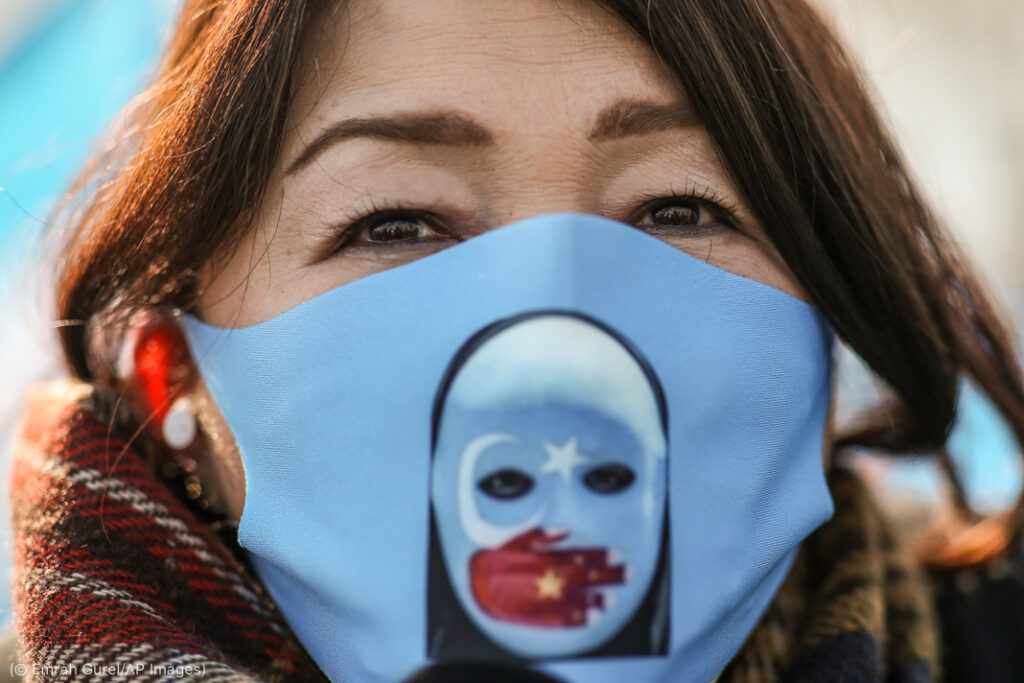 A Uyghur woman protests the People’s Republic of China’s abuse of Uyghurs in Xinjiang during a March 25 protest in Istanbul. (© Emrah Gurel/AP Images)

The United States is working with international partners to defend human rights worldwide as authoritarian regimes step up repression amid the COVID-19 pandemic.

“Standing for people’s freedom and dignity honors America’s most sacred values,” Secretary of State Antony J. Blinken said March 30, announcing the release of the 2020 Country Reports on Human Rights Practices. “At our best, we stand for freedom and justice for all. Not just here at home, but around the world.”

The reports, issued every year since 1977, serve as a record of human rights violations around the world and support U.S. and international efforts to combat abuses.

The 2020 reports show violations trending up across the globe, Blinken said.

In 2020, governments cracked down on peaceful protests in Belarus, Venezuela and Hong Kong, repressing freedom of speech and assembly, and attempting to silence calls for free elections.

Authoritarian regimes used the COVID-19 pandemic as an excuse to target critics, Blinken said, noting an increasing use of technology to surveil citizens and block the internet.

In the People’s Republic of China, journalists disappeared after interviewing health care workers in Wuhan during the COVID-19 outbreak, the report on rights conditions in the PRC says.

Worsening trends in human rights have continued in 2021. Blinken condemned the Assad regime’s devastating attacks on civilian targets in Syria, including the March 21 shelling of a hospital in Aleppo that killed seven people, including two children, worsening a humanitarian crisis 10 years after Bashar al-Assad’s regime first responded to calls for reform with repression.

The United States is working with international partners to punish and deter regimes that violate human rights. Canada, the United Kingdom and the European Union have joined the United States in imposing sanctions against PRC officials responsible for human rights abuse against Uyghurs and members of other minority groups in Xinjiang.

The same countries also imposed sanctions in March against individuals associated with the military coup in Burma and violence against protesters. U.S. sanctions specifically target police, security officials and military units engaged in the violent crackdown on peaceful protesters.

“President Biden has committed to putting human rights back at the center of American foreign policy,” Blinken said. “We will bring to bear all the tools of our diplomacy to defend human rights and hold accountable perpetrators of abuse.”