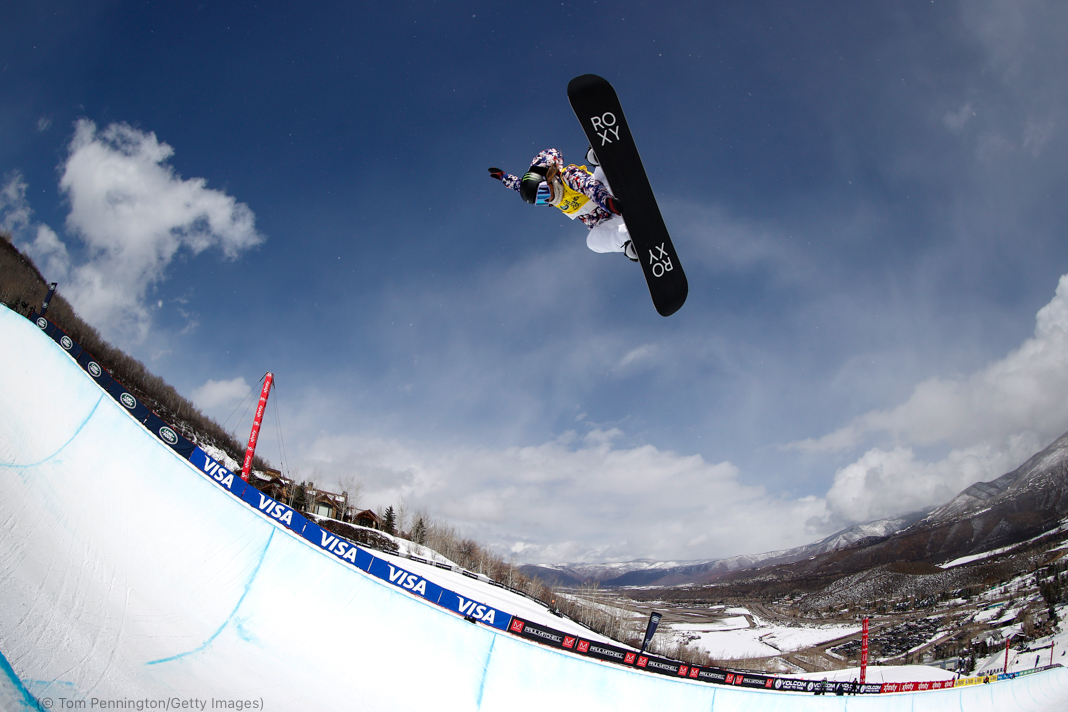 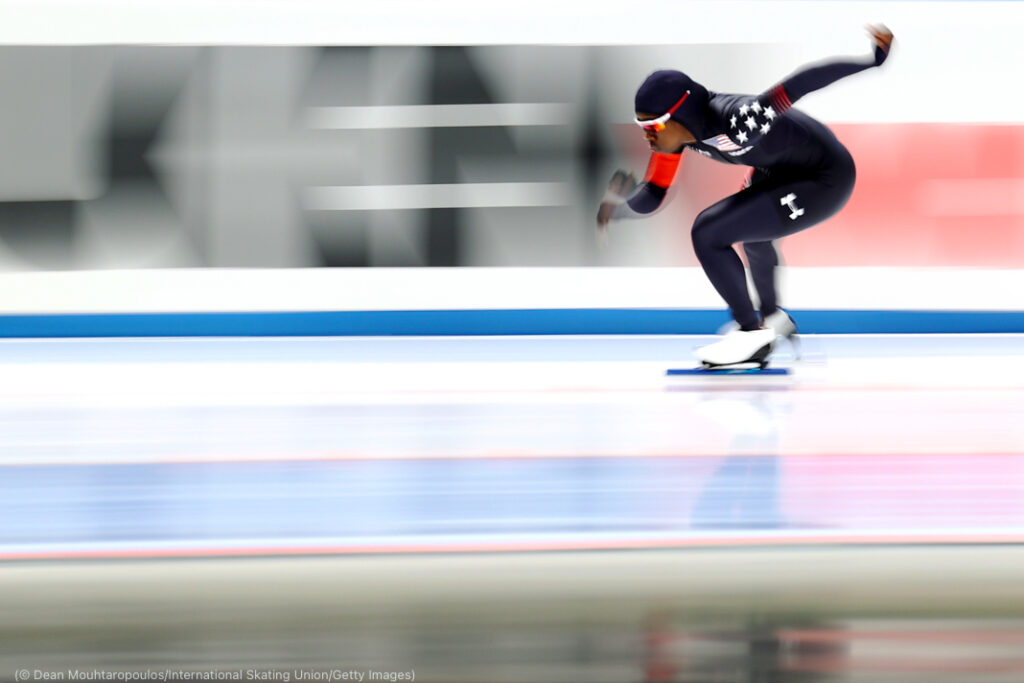 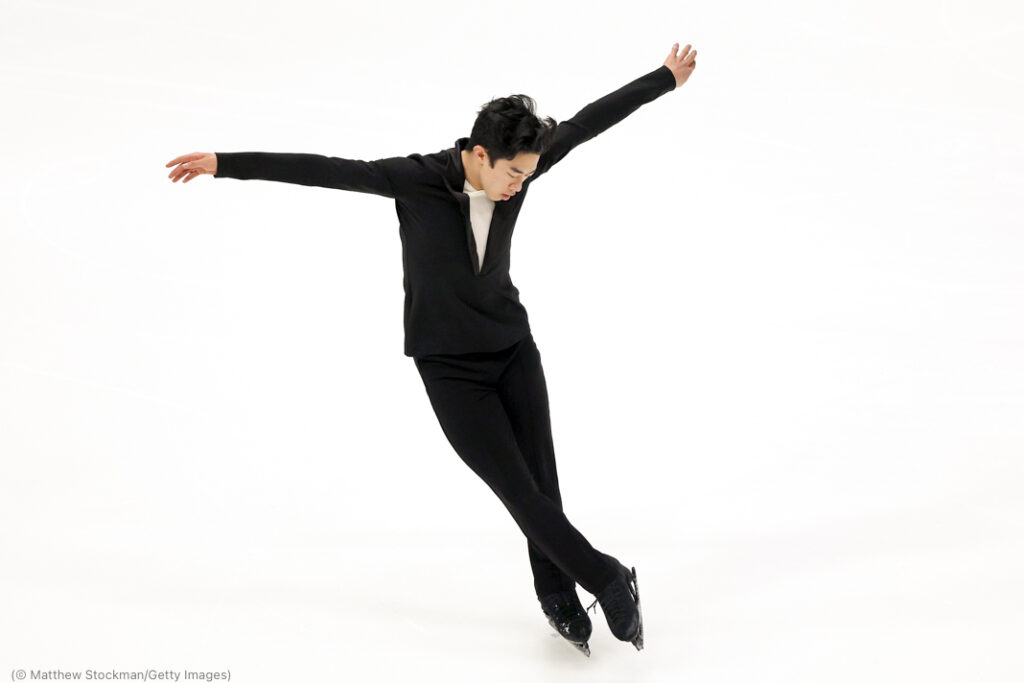 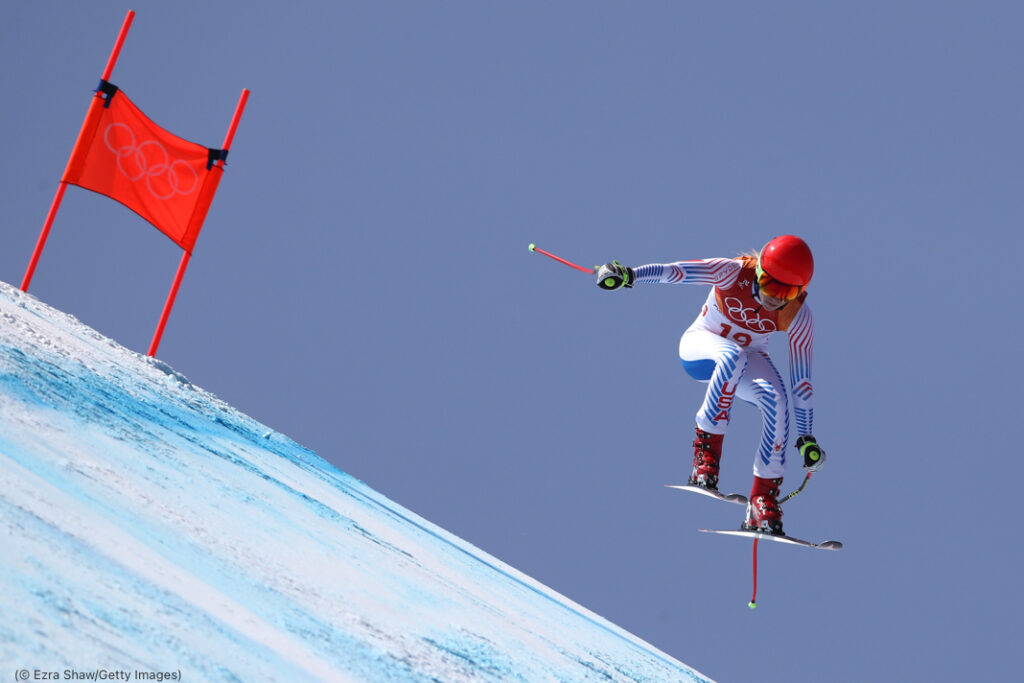 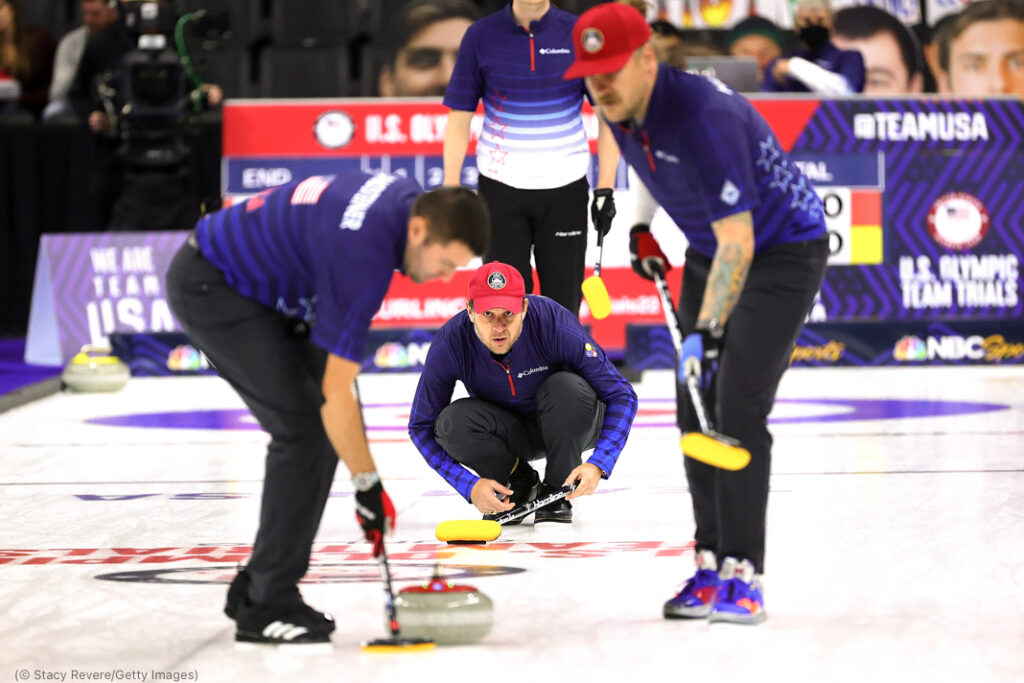 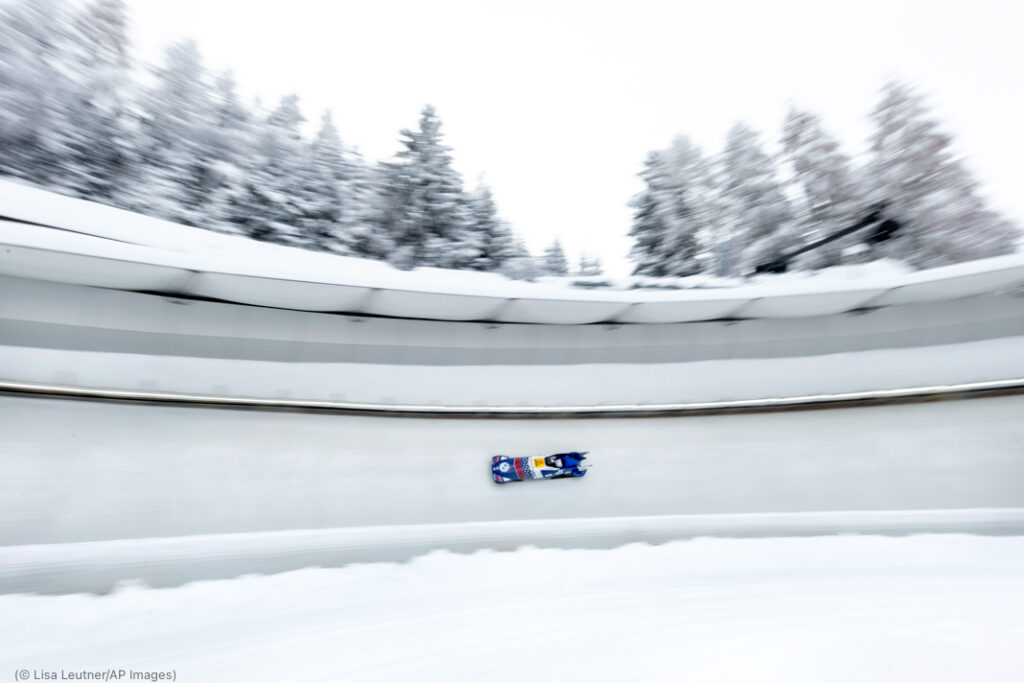 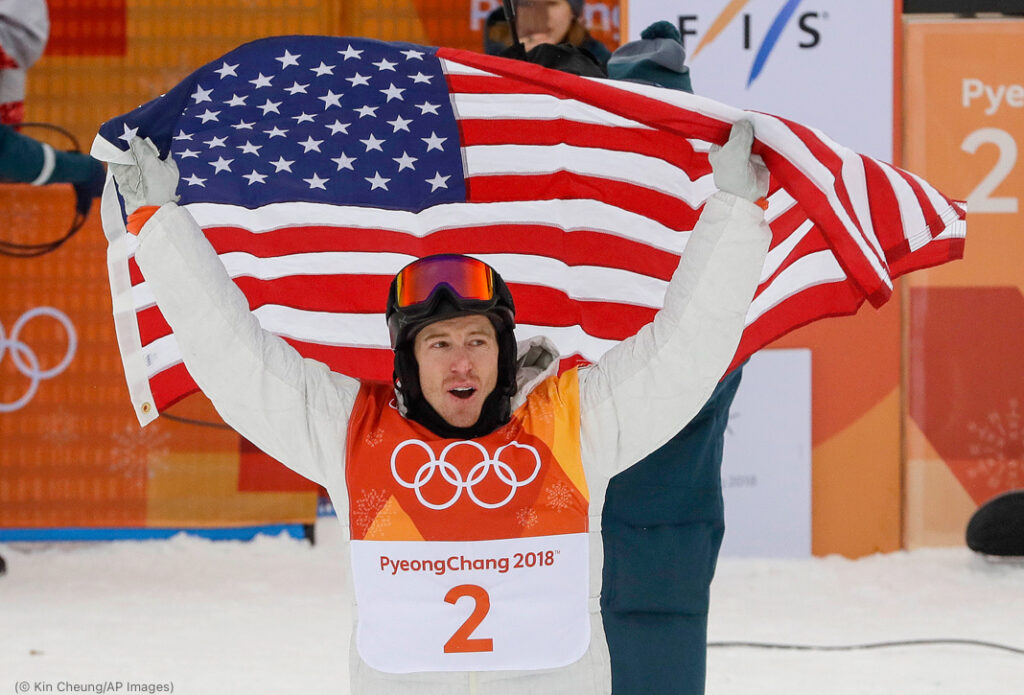 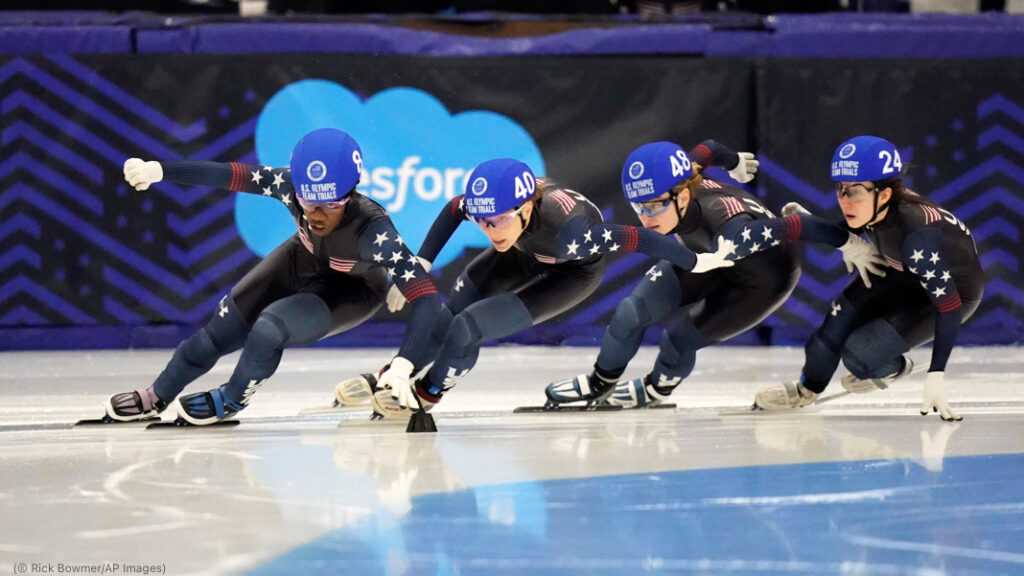 OMAHA, NEBRASKA – NOVEMBER 20: John Shuster of the United States delivers a stone during Game 2 of the US Olympic Team Trials at Baxter Arena on November 20, 2021 in Omaha, Nebraska. (© Stacy Revere/Getty Images)

As the countdown begins for the opening of the 2022 Winter Olympics, the world’s elite athletes are preparing to compete in a record 109 events in several sports — skating (which includes figure skating and speedskating), biathlon, skiing (which includes snowboarding and ski jumping), bobsledding, luge, skeleton, curling and ice hockey.

Team USA includes several stars, one of whom is snowboarder Chloe Kim, 21 (pictured above). A California native who won a gold medal in the halfpipe at the 2018 Winter Olympics in Pyeongchang, Kim became the first woman to land back-to-back 1080s — three full rotations in the air — at an Olympics, “and a few months later, she was the first woman to land a frontside double cork 1080 — essentially flipping herself upside down twice during an aerial rotation — in a halfpipe,” TIME magazine reports. Kim is favored to win gold in 2022. Here are a few of Team USA’s other contenders to watch:

Erin Jackson, 29, of Ocala, Florida, is the top-ranked speedskater in the world at the 500-meter distance, winning four of the first five 500-meter World Cup races this season. At the 2018 U.S. Olympic Trials, after only four months of training on ice, she became the first Black woman to qualify for the U.S. Olympic team in long track speedskating. Now, with four more years of experience under her belt, Jackson is the United States’ best prospect for a gold medal in the 500 meters — and as a Black star in a largely white sport, she will likely be the focus of intense media attention, but she says she’s not worried about it.

In this 2021 photo, she competes in Poland. “I do better under pressure,” Jackson recently told Sports Illustrated. “I feel like the more pressure that people put on me, the more I’m going to be ‘in the zone’ and ready to deliver.”

Nathan Chen, 22, was born in Salt Lake City to Chinese immigrant parents and began skating at age 3. Now based in California, he is the first figure skater to have landed five types of quadruple jumps in competition — toe loop, Salchow, loop, flip and Lutz — along with eight quadruple jumps across a single competition. As the world record holder for the free skate and the combined score events, Chen will be one of the most prominent U.S. athletes at the 2022 Winter Games. He plans to resume his studies at Yale University after the Olympics.

In this January photo, he competes in Nashville, Tennessee. About the upcoming Olympics, he recently told a New York Times reporter that he hopes to look back on his career years from now and know that he really enjoyed the time — to be able to say, “I had a lot of fun on the ice.”

Mikaela Shiffrin, 26, from Colorado, is a two-time Olympic gold medalist who’s been described as the greatest athlete to ever fly down a mountain. Inspired by skiing superstar Bode Miller, she took up her sport at age 6 and made her World Cup debut at age 15. At 17, she became the youngest woman in U.S. history to win a World Championship and, at 18, the youngest athlete in history to win an Olympic slalom gold medal (in Sochi, in 2014).

This 2018 photo captures Shiffrin competing in the Winter Olympic Games in Pyeongchang. “On race day, I focus so hard on the first gate that it’s like tunnel vision,” she says on Instagram. All she thinks about, she says, “is exploding out of the start and getting down the hill as fast as possible.”

John Shuster, 39, of Chisholm, Minnesota, has played in five straight Winter Olympics and nine World Curling Championships. He led the first U.S. curling team to win a gold at the 2018 Winter Olympics in Pyeongchang. He also won a bronze medal at the 2006 Winter Olympics in Turin. Shuster will lead a team of Olympic veterans in the 2022 Winter Games, eager not only to defend the gold medal he won four years ago but also hoping to become the only man to win multiple curling golds.

Here, Shuster (center crouching figure) delivers a stone in a game in 2021 in Omaha, Nebraska. “I feel like I’ve been getting better and better every year,” he recently told Olympics.com. “I’m in the best shape of my life.”

Elana Meyers Taylor, 37, is a three-time Olympian as a bobsled pilot. She was born in California and has international roots, as her father’s side of the family is from Jamaica, Panama and Colombia. (Meyers Taylor says her athletic parents were the biggest influence in shaping her athletic career.) Today she lives in Atlanta.

Meyers Taylor took silver at the 2018 Winter Olympics in Pyeongchang with pusher Lauren Gibbs. In this 2021 photo, she races with Kaysha Love in Austria. A longtime advocate for women’s and racial equality in sports, Meyers Taylor aims to compete not only in the two-woman race in the 2022 Winter Games, but in the newly added solo race too.

Shaun White, 35, a native of the San Diego area, is a legend. In addition to snowboarding, he is a champion skateboarder. He was the first person to compete in — and win — both the Summer and Winter X Games in two different sports.

A four-time Olympian — and three-time gold medalist — in halfpipe snowboarding, he holds the world record for the most X-Games and most Olympic gold medals by a snowboarder. Here, he celebrates a gold medal in the 2018 Winter Olympic Games in Pyeongchang. White has said the 2022 Winter Games will be his final Olympic competition. “Everything you do in life takes hard work, and if you find something you really love, go for it,” he told a People magazine reporter. “You may fall as many times as you get up, but be patient and trust the journey.”

Kristen Santos, 27, of Fairfield, Connecticut, is the American record holder in the 500-meter and 1,000-meter short track speedskating events. At the 2022 Winter Olympics, she will compete in several short track events: the 500-, 1,000- and 1,500-meter races and two relay events. She is favored to help the U.S. women capture their first Olympic medal in short track since 2010. Santos says that adversity has helped her excel: When she missed making the U.S. Olympic team in 2018, her motivation to win a spot on the team in 2022 went into overdrive.