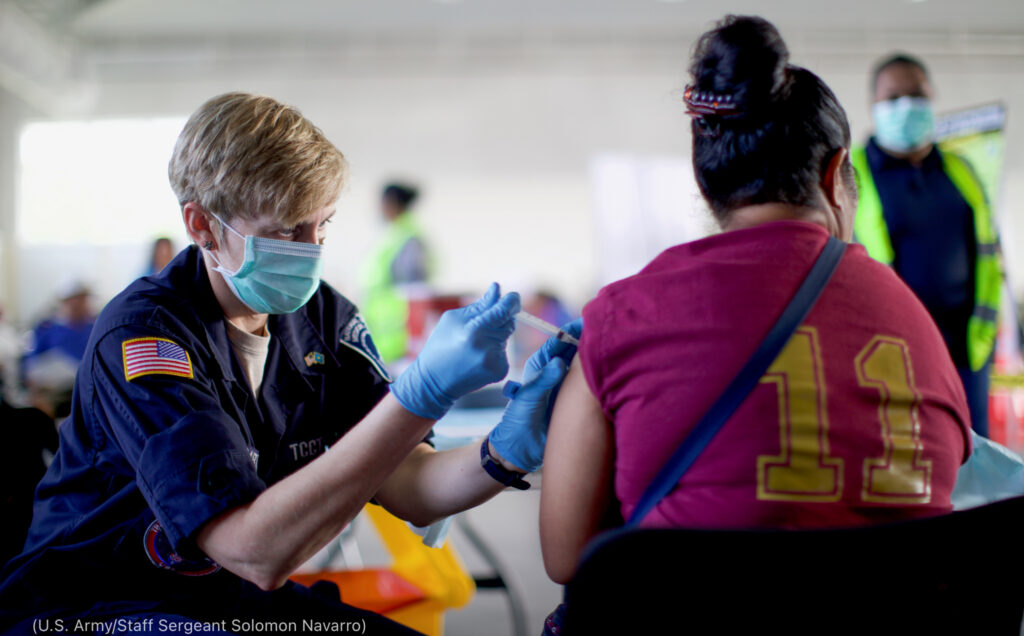 Stacy McCarthy, a nurse with U.S. Department of Health and Human Services administers a vaccine to a Palauan community member March 11. COVID-19 remains a global challenge that no nation can face alone – our strong network of alliances and partnerships is critical to combating this virus. The U.

The United States’ COVID-19 vaccine donations are protecting people around the world.

“Bhutan’s successful vaccination drive is a powerful example of how the donations of vaccines, secured bilaterally and multilaterally, can help protect and save lives,” UNICEF Bhutan Representative Dr. Will Parks said July 27, noting recent COVAX deliveries of U.S.-donated vaccine doses.

Palau announced in August that it has fully vaccinated 80% of its eligible population. The United States delivered thousands of vaccine doses to Palau, the Federated States of Micronesia and the Marshall Islands in late 2020 and early 2021. In March, U.S. Health and Human Services Department staff traveled to Palau and vaccinated 5,600 people, including some in remote areas of the country.

President Biden has said the United States will serve as an “arsenal of vaccines” for the world. The United States has already shipped more than 110 million vaccine doses to more than 60 countries worldwide. It will soon provide an additional 500 million doses of the Pfizer-BioNTech vaccine for COVAX to deliver to 92 low- and lower-middle income economies.

U.S. donations are helping governments quickly immunize thousands of people. Malaysia and Sri Lanka each recently administered hundreds of thousands of doses in a single day, according to news reports. As of August 3, the United States had shipped 1 million vaccine doses to Malaysia and 1.5 million doses to Sri Lanka through COVAX.

Ecuador, which received 2 million vaccine doses from the United States, is vaccinating 200,000 people per day and is on pace to immunize half of its population by early September, according to the World Bank.

The Taipei Economic and Cultural Representative Office in the United States in a June 19 statement said America’s shipment of vaccines to Taiwan “exemplifies U.S. global leadership in combating COVID-19, in supporting access to vaccines around the world.”