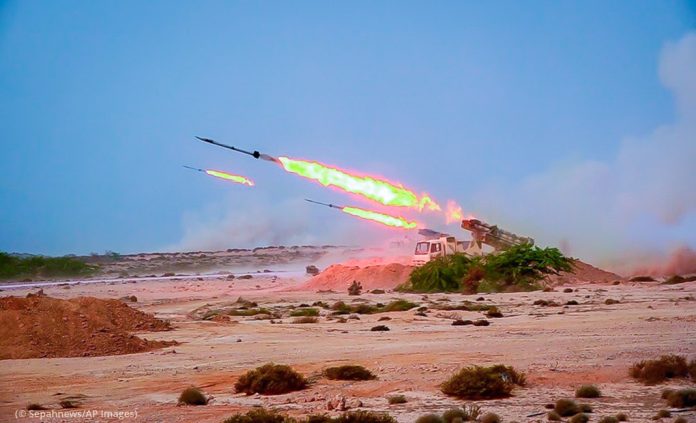 The U.S. is taking action against the Iranian regime’s weapons programs to stop it from spreading violence across the Middle East and beyond.

He noted that the Iranian regime’s Islamic Revolutionary Guard Corps controls the nation’s construction sector, necessitating restrictions on metals. The IRGC, a U.S.-designated terrorist group, is also under U.N. sanctions for building a uranium enrichment facility at Fordow that could support the regime’s nuclear weapons program.

“Any knowing transfer of certain materials, including graphite or raw or semi-finished metals, to or from Iran to be used in connection with the construction sector of Iran remains sanctionable,” Pompeo said.

.@SecPompeo: We call on the international community to join us in crafting a stronger deal that addresses the full range of Iran’s malign behavior, and protects people of all nations that want to live free from Iranian predations. pic.twitter.com/CRPyS84UrO

The metals sanctions are part of a broad U.S. campaign to compel Iran’s regime to scrap its nuclear weapons ambitions, to stop funding terrorism abroad and to spend resources at home providing for its people instead.

Pompeo announced on August 20 that the U.S. would use its authority in U.N. Resolution 2231 to reimpose U.N. sanctions against Iran, including extending a 13-year embargo on the regime’s dealing in advanced weapon systems. The embargo was set to expire in October.

The U.S. also has seized weapons headed to Houthi forces in Yemen, shipped in violation of U.N. Security Council resolutions. The U.N. has confirmed that weapons, including anti-tank and surface-to-air missiles, seized off the coast of Yemen in November 2019 and February 2020 came from Iran.

The U.S. seized an additional weapons shipment headed to Yemen in June, including 200 rocket-propelled grenades and more missiles.

Our maximum pressure campaign on the Iranian regime continues. Today, we designated two entities and one individual for providing material support to Mahan Air. If you do business with a designated global terrorist entity, you run the risk of being sanctioned.

Meanwhile, the U.S. Department of the Treasury on August 19 designated two companies and an Iranian national for supplying aircraft parts to Mahan Air, a warning to the aviation industry against supporting the IRGC airline, which transports weapons and foments violence.

The designations of Parthia Cargo and Delta Parts Supply FZC, based in the United Arab Emirates, and Amin Mahdavi, owner of Parthia Cargo, freeze these companies’ assets in the U.S. and preclude dealings with U.S. entities.

“The Iranian regime uses Mahan Air as a tool to spread its destabilizing agenda around the world, including to the corrupt regimes in Syria and Venezuela, as well as terrorist groups throughout the Middle East,” said Treasury Secretary Steven T. Mnuchin on August 19.