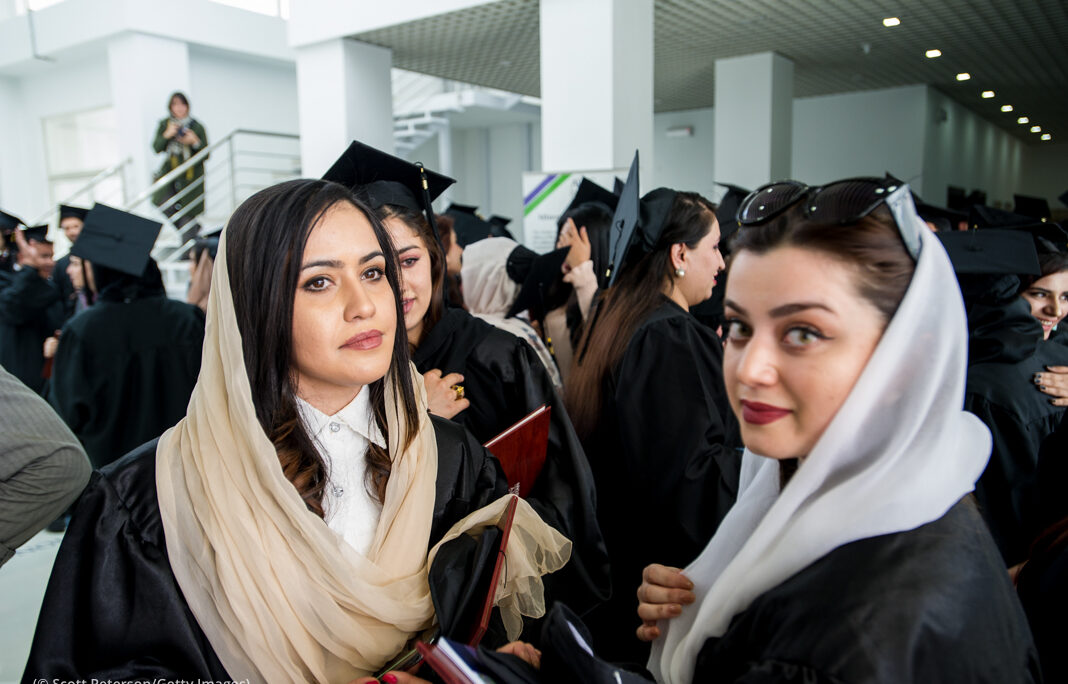 KABUL, AFGHANISTAN - May 21: Women graduates celebrate after more than 100 Afghan students from the American University of Afghanistan (AUAF) receive their diplomas at a graduation ceremony on campus on May 21, 2019, in western Kabul, Afghanistan. The AUAF has rebounded since a Taliban attack in Aug

The U.S. empowers women around the world through the United States Strategy on Women, Peace, and Security (WPS Strategy).

In 2017, the U.S. government signed into law the Women, Peace, and Security Act, becoming the first nation to enact a comprehensive law to promote women’s participation in conflict prevention and peace training.

This whole-of-government approach to advance women’s meaningful participation is a foreign policy and national security priority of the United States.

This year, the U.S. launched the American Council on Women, Peace, and Security to build on the work of the WPS Act and to focus on women’s economic and political empowerment.

At the launch of the council October 7, hosted by the Heritage Foundation, U.S. Representative Michael Waltz explained how these WPS initiatives help women improve their communities both socially and economically.

Waltz emphasized that peace starts when women are economically and socially empowered, starting at the family level. Once that is achieved, countries begin to see results.

U.S. Ambassador-at-large Kelley Currie said extremist groups and authoritarian governments remain the biggest threats to the empowerment of women and girls. She reiterated that the U.S., along with like-minded partners, works to ensure that women around the world are equal partners in building sustainable peace and lasting prosperity.

“Societies that empower women, that allow them to fully participate across the economy, across politics, across all social spheres, are safer, more prosperous, more peaceful and, overall, more successful,” she said.

Decades of U.S. investment in education, health and business initiatives for women in Afghanistan have yielded significant gains for Afghan women and girls. In 2001, Afghan women and girls had little access to education. Today, 40 percent of students in basic education are girls, said Jenny McGee, of the U.S. Agency for International Development (USAID).

Higher education enrollment is on the rise, as well. In 2019, 100,000 Afghan women were enrolled at a university, McGee said.

This is thanks, in part, to the United States’ whole-of-government approach to empowering Afghan women in education and business. USAID’s largest bilateral women’s program, Promote, trained thousands of women leaders in business, politics and economics in Afghanistan.

“The USAID-Promote Women’s Scholarship program has helped me to realize my dreams. I am extremely thankful to USAID for their tremendous efforts in helping hundreds of girls like me around Afghanistan to materialize their dreams.” – Hamida Barakzai, a USAID scholarship recipient. pic.twitter.com/GPpUukgKfR

Promote supported more than 5,000 activists across all 34 provinces to raise women’s voices in Afghan society on issues of justice and peace and continues to support women’s inclusive and meaningful participation.

Promote’s support for women in the economy saw huge numbers of women trained and placed in new or better jobs, and helped women-owned businesses negotiate millions of dollars’ worth of contracts at USAID-sponsored trade shows.

USAID will continue to assist Afghan women in obtaining a university education in a field of science, technology, engineering or mathematics through the Promote Scholarship Endowment and other such opportunities.