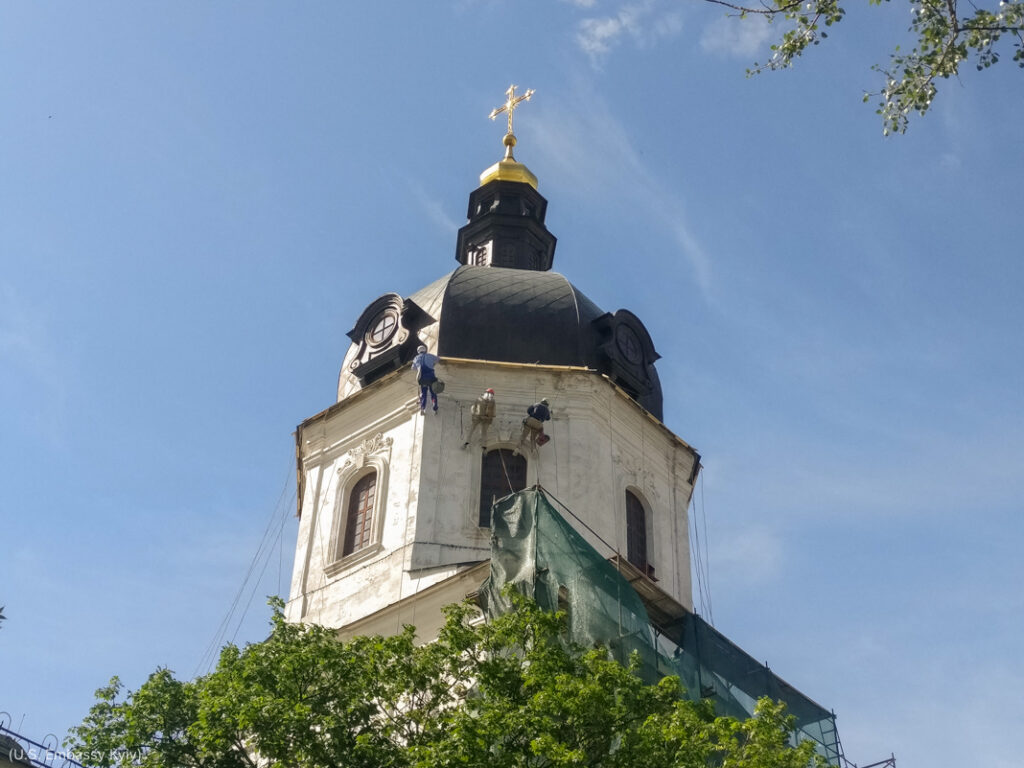 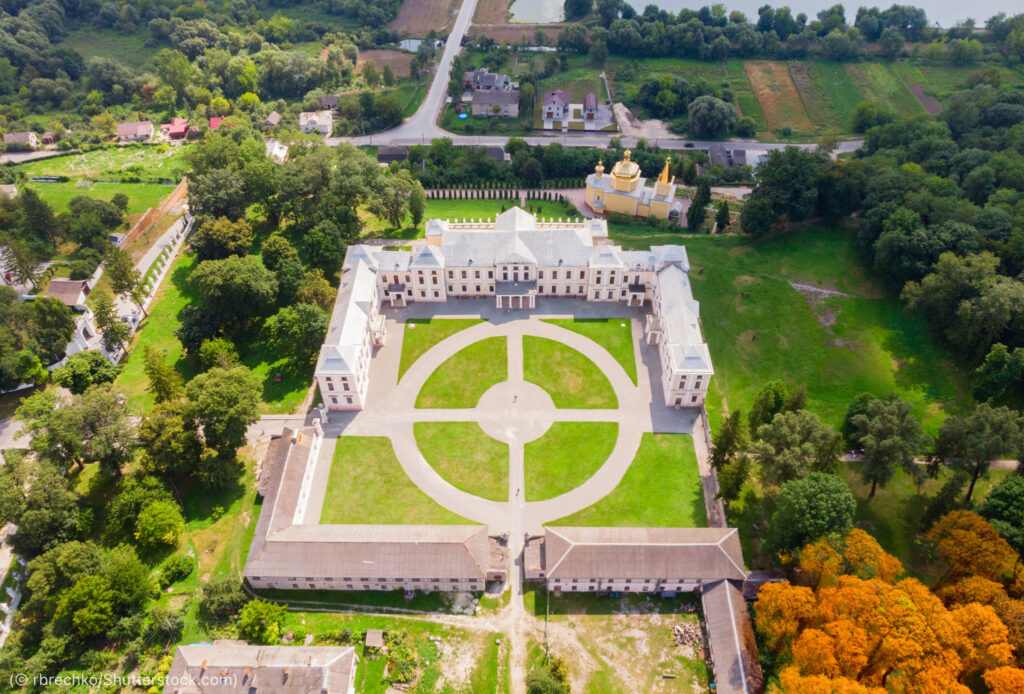 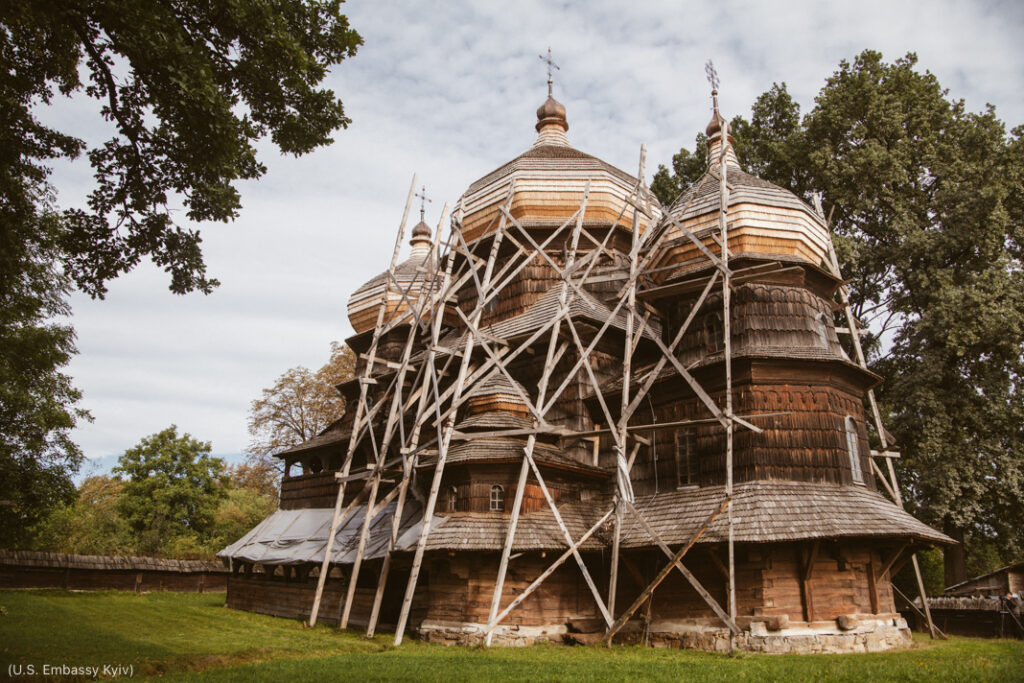 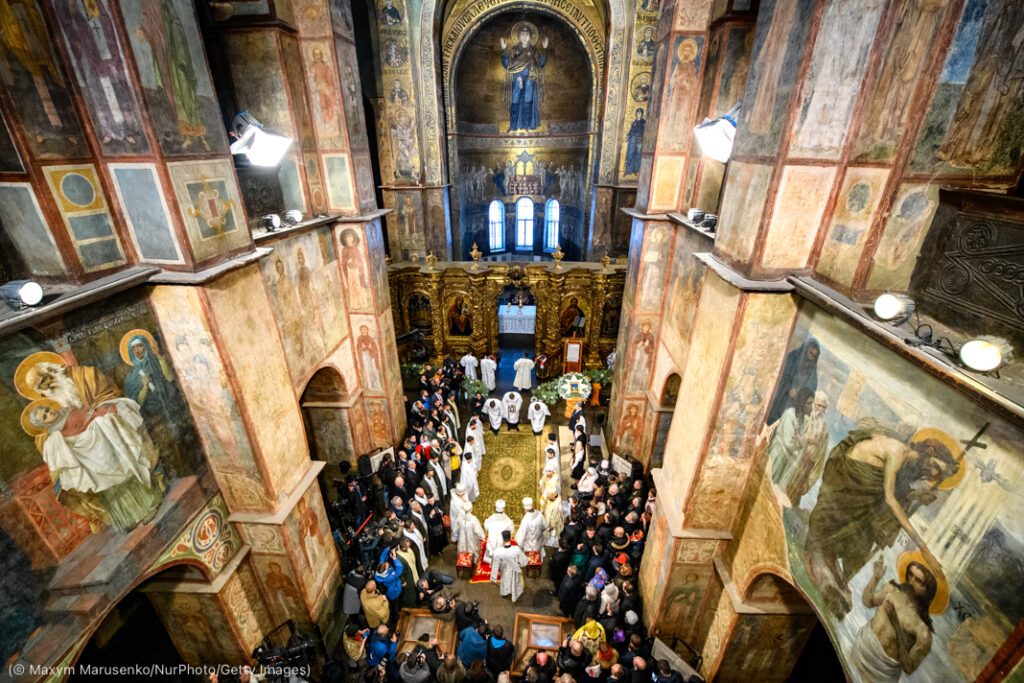 The U.S. supported the preservation of frescoes inside St. George’s Church in Drohobych, Ukraine, in 2013. (U.S. Embassy Kyiv)

A crew works on the restoration of the Old Academic Building at the Kyiv-Mohyla Academy in Kyiv, Ukraine. (U.S. Embassy Kyiv)

Both the interior and exterior of the historic Black House in Lviv, Ukraine, were restored in 2016. (U.S. Embassy Kyiv)

Since 2001, the United States has provided more than $1.7 million to support 18 cultural preservation projects in Ukraine. Support is provided by the Ambassadors Fund for Cultural Preservation, a program of the Bureau of Educational and Cultural Affairs in the U.S. Department of State.

“This shows our respect for Ukrainian cultural heritage and Ukraine’s contributions to world culture,” said Bill Taylor, the former U.S. Ambassador to Ukraine.

Here are examples of some recent projects:

Built in 1703, the Old Academic Building at the National University of Kyiv-Mohyla Academy is the first building in Ukraine built for educational and cultural purposes.

The Mohyla Academy’s founder, the Zaporizhian Cossack Ivan Mazepa, gained notoriety when he joined Swedish King Karl XII in battle in 1708 against Russian Czar Peter I at Poltava. This resulted in Mazepa being declared an enemy of the Russian Empire, his excommunication from the Russian Orthodox Church, and his subsequent erasure from Ukrainian history until after the Soviet period.

A $405,000 renovation project in 2019 restored the Old Academic Building, including its domed Ukrainian Orthodox “Church of the Annunciation.”

“I’m very pleased that the United States can support Ukraine in preserving this historic site,” Taylor said about the project in 2019.

Now a museum, the 16th-century building is a prominent feature of the city’s historic Rynok Square (which translates to Market Square in English). The “Black House” is an example of the far-reaching influence of Western European architectural design.

A $275,000 grant from the United States in 2016 aided conservation efforts inside and outside the building.

The museum features exhibits on modern history, such as the 2004 Orange Revolution and the Maidan demonstrations of 2013–2014. It also includes a memorialization of Ukrainians who died in Soviet death camps.

The Vyshnivetsky Palace in western Ukraine is a symbol of Ukraine’s independence. Originally built in the 15th century, it was redesigned in the 18th century by architects who were trained in France.

The Ukrainian noble family who built and lived in the palace for nearly 400 years founded the first Zaporizhian Cossack military force in the 16th century. This force would later play an influential role in the historical and democratic development of the Ukrainian state and the election of the first Rada, or congress, of free Ukrainians.

The Vyshnivetsky family also hosted Mazepa, the Zaporizhian Cossack Hetman and founder of the Mohyla Academy; the 19th-century Ukrainian nationalist poet Taras Shevchenko; and other defenders of Ukrainian independence at the palace.

The ground floor of the palace boasts an 80-meter “Hall of Mirrors,” a replica of the same hall in Versailles. French novelist Honoré de Balzac called the site a “little Versailles” after a visit.

A $155,000 U.S. grant in 2015 supported the restoration of the hall and reinforcement of retaining walls. The palace is part of a reserve known as the “Ternopil Region Castles” in western Ukraine.

St. George’s Church in Drohobych is considered an exceptional example of a traditional tserkva, or wooden church, unique to the Carpathian region of Ukraine and Poland. Now a World Heritage site, St. George’s features the most advanced wooden dome construction technologies of its time. Over the centuries, fire has damaged the church and it had to be restored several times. The United States provided an $85,000 grant to wire the church for fire detection and prevention and to restore the interior wall paintings.

Originally built in the 11th century, St. Sophia Cathedral was home to princes who hosted foreign ambassadors and concluded treaties.

A $49,000 U.S. grant in 2011 supported the conservation of 12th-century mosaics. The mosaics had been rescued from the original St. Michael’s Golden-Domed Cathedral nearby in advance of the Soviet-led demolition of that cathedral in the 1930s and relocated to St. Sophia’s.

To get a closer look at some of these projects, watch this three-minute video from the U.S. Embassy, Kyiv, in English and Ukrainian.