The United States is pledging an additional $225 million to the global fight against COVID-19, strengthening its commitment to stopping the global pandemic.

“We do this because we’re good and generous people,” U.S. Secretary of State Michael R. Pompeo said in announcing new COVID-19 funding April 7. “We also do it because viruses don’t respect borders. When we help our friends abroad, it keeps us safe back here in the homeland as well.”

The additional aid builds on the $274 million the United States already has committed to fighting COVID-19 in 64 countries while battling an outbreak of the disease at home.

The funding is aimed at stopping transmission of the coronavirus by strengthening health care systems, preparing laboratories and training medical workers. Previous assistance has helped Guatemala set up a COVID-19 treatment hospital and allowed children in Cambodia to continue their education online while schools are closed. 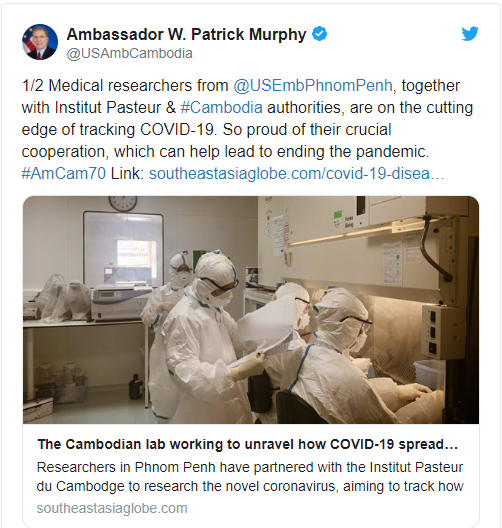 The United States has been the largest single country donor to Ebola response efforts since the most recent outbreak of the disease began in August 2018. The U.S. invested $569 million for response and preparedness efforts in the Democratic Republic of the Congo and high-risk neighboring countries.

The United States deployed a Disaster Assistance Response Team, comprising disaster and health experts from the U.S. Agency for International Development and the U.S. Centers for Disease Control and Prevention, in September 2018, and has supported vaccination campaigns, diagnostic testing, and treatment.

The U.S. private sector has also played a major role in combating both diseases. U.S. corporations and charities are putting millions toward global COVID-19 relief efforts, while U.S. companies are working tirelessly on new therapies and a vaccine.

The U.S. pharmaceutical firm Merck & Co. in November won the European Commission’s first ever regulatory approval for a vaccine against the Ebola virus and in December received approval from the U.S. Food & Drug Administration, a significant step toward preventing future outbreaks.