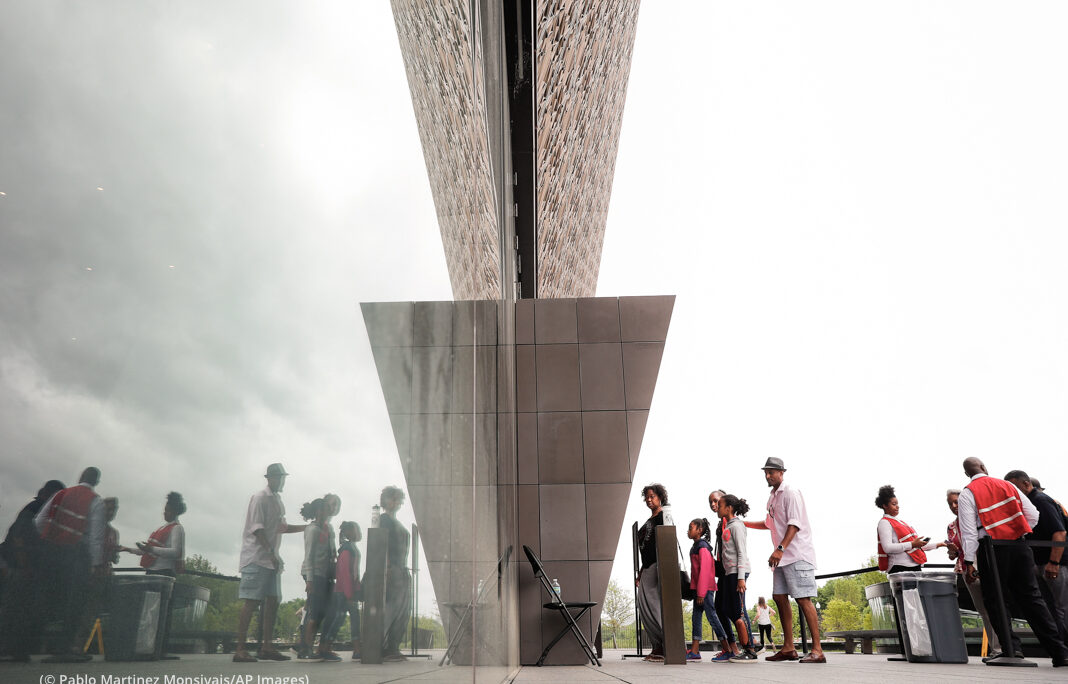 Visitors are seen reflected as they enter the Smithsonian National Museum of African American History and Cultural on the National Mall in Washington, Monday, May 1, 2017. The hottest ticket in Washington right now is for the new museum, where thousands of tickets are snapped up each month within mi

When were you first made aware of race? And as a child, how did you make sense of human differences?

These are among the questions you’ll encounter in Talking About Race, a newly launched online portal from the Smithsonian National Museum of African American History & Culture. The website provides tools to help Americans lead constructive conversations about racism and its corrosive harm to individuals and society.

The museum points out that racism can be blatant or it can be subtle, nuanced and hard to detect. The web portal helps educators, parents, guardians and people committed to equality to identify racism and suggests ways to combat it. The portal encourages users to dive into topics like whiteness, being anti-racist, and the history of race and racism.

“The portal offers a wealth of resources to inform and guide discussions — videos, role-playing exercises, targeted questions and more,” Spencer Crew, the museum’s interim director, said. “We hope that people will use this site to become more comfortable about engaging in honest dialogue and self-reflection.”

Today we launch Talking About Race, a new online portal designed to help individuals, families, and communities talk about racism, racial identity and the way these forces shape every aspect of American culture.

In one section, users are given a road map for responding to and interrupting interpersonal racism. Users are then asked to consider what triggers their responses and to take note of their emotional reactions and how the response manifests in their bodies. Users are encouraged to uncover their own bias and reflect on how racist ideas might impact their daily lives.

The museum accelerated the portal’s launch by a month in response to protests across America following the death of George Floyd, a 46-year-old black man who was killed by police during an arrest in Minneapolis on May 25.

The police officers involved have been fired and charged with murder or other felony charges.

The Talking About Race portal reflects nearly a decade of work from co-developers Candra Flanagan, the museum’s director of teaching and learning, and Anna Hindley, its director of early childhood education.

“This became the right time to share it with the country at a moment when there’s so much happening in the murder of George Floyd and people processing it in different ways,” Hindley said. “For many people who are white, who have had the privilege not to think about race every day and see race, it’s a new awakening,” she said. She added that more whites are “enraged and aware.”

While the portal helps people understand racism, it alone won’t be enough to end the problem, Flanagan said. Rather, she said, everyone should commit to dismantling systemic racism in other ways and over time.

“This is long-term work, and it’s work that is a lifetime journey,” she said.

But ever since the museum’s 2016 opening, the Number 1 question visitors have asked is how to talk about race, especially with children. The portal is a step toward doing that, Crew said.

“We recognize how difficult it is to have that conversation,” Crew said. “But in a nation still struggling with the legacies of slavery, Jim Crow laws [that segregated blacks from whites in public places] and white supremacy, we must have these tough conversations if we have any hope of turning the page and healing.”