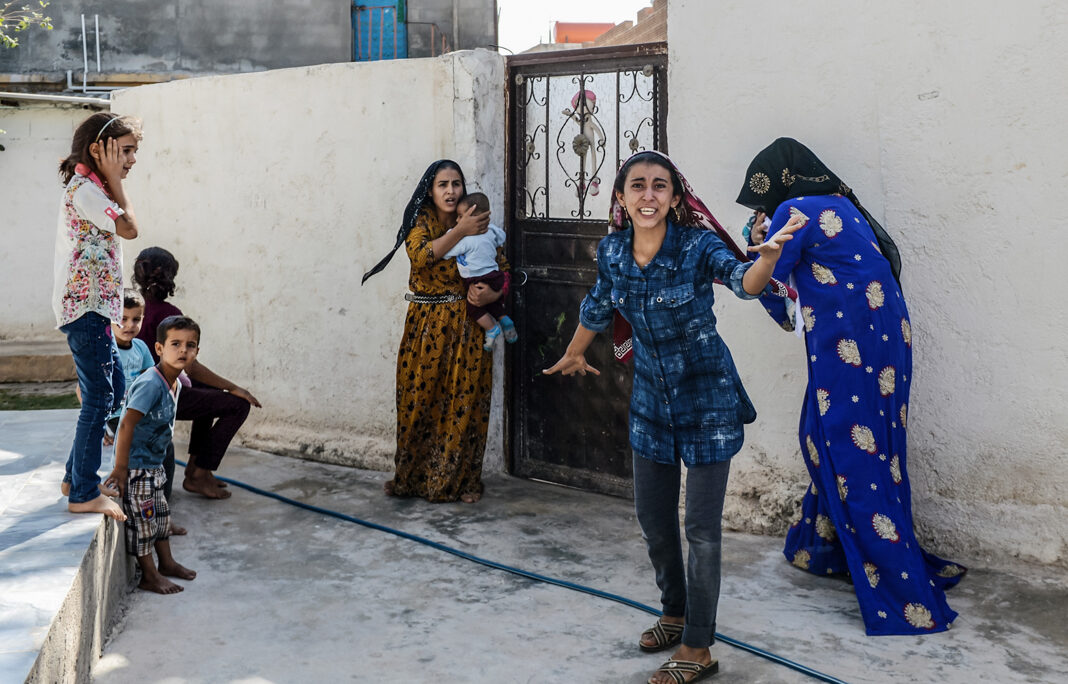 People run to take cover after mortars fired from Syria, in Akcakale, Turkey, Thursday, Oct. 10, 2019. An Associated Press journalist said at least two government buildings were hit by the mortars in Sanliurfa province's border town of Akcakale and at least two people were wounded. (© Ismail Coskun/

The United States is highlighting its commitment to prevent, mitigate and respond to atrocities globally.

“When we say ‘Never again,’ it must mean more than words,” said Denise Natali, assistant secretary of state for Conflict and Stabilization Operations at a September 16 event hosted by the U.S. Institute of Peace. “It must mean taking clear and timely action.”

The U.S. government collects data to assess risks and identify where atrocities are occurring, trains security officials to prevent or reduce atrocities, and promotes international and locally led efforts on justice and accountability.

Steven Gillen, deputy assistant secretary of state for Democracy, Human Rights and Labor, pointed to a training event held in Johannesburg in December 2019 and a virtual training event held this summer as concrete examples of improving the State Department‘s ability to support this U.S. priority. USAID held atrocity-prevention training for its field staff based in the Sahel region of Africa as well as South Sudan.

The Elie Wiesel Genocide and Atrocities Prevention Act of 2018 requires the U.S. government to pursue a strategy to prevent, lessen and respond to atrocities.

Thanks to @USIP for a productive discussion on the USG's Atrocity Early Warning initiatives to prevent atrocities and hold perpetrators accountable. @StateDept is committed to implementing the #ElieWieselAct & ensuring that marginalized communities are #NeverAgain victimized. pic.twitter.com/FkAtkxOYPm

Morse Tan, U.S. ambassador-at-large for Global Criminal Justice, said: “We are taking action to prevent atrocities, to bring justice to the victims of atrocities, and to hold accountable those who are responsible for atrocities.”

The United States supports a new trend in international criminal justice, the development of international information-gathering mechanisms, as well as commitments by allies to contribute financially to shared goals.

In Syria and Iraq, these have taken the form of support to the International, Impartial, Independent Mechanism to Assist in Prosecution of Persons Responsible for the Most Serious Crimes Under International Law Committed in the Syrian Arab Republic since 2011, created by the U.N. General Assembly in 2016, and the Investigative Team to Promote Accountability for Crimes Committed by Da’esh/ISIL, created by the U.N. Security Council in 2017 to collect and preserve evidence of ISIS atrocities that may amount to genocide, war crimes, and crimes against humanity.

It is essential that countries remove the fear of reporting atrocity crimes by demonstrating that survivors and witnesses have a safe space to share information on human rights abuses.

The United States contributes to the search for accused war criminals through the War Crimes Rewards Program. This program offers up to $5 million for information that leads to the arrest, transfer or conviction of certain designated individuals wanted for war crimes, genocide, and crimes against humanity by international, hybrid, or mixed tribunals. The Rewards Program has contributed to more than 20 cases.

The program is currently focused on the six Rwandans still at large and wanted for their alleged roles in the 1994 Rwanda genocide. One Rwandan who was designated, Félicien Kabuga, was recently arrested in France. Kabuga is accused of financing the genocide and co-founding the infamous Radio Télévision Libre des Mille Collines, which broadcast hate speech against Tutsis.

At the U.S. Institute of Peace event, Kirsten D. Madison, assistant secretary of state for International Narcotics and Law Enforcement Affairs, emphasized the important role of police and other criminal-justice officials in atrocity prevention.

Madison also spoke about the importance of increasing women’s participation in the security sector. Women and girls are disproportionately affected by conflict and often deliberately targeted for sexual violence. When the percentage of women in a police force rises, the reporting of gender-based violence, including sexual assault, increases.

The State Department is working with partners including the U.S. Holocaust Memorial Museum to help criminal justice practitioners recognize and respond to atrocity risk factors and early-warning signs.

In addition, USAID tracks and counters hate speech, which can be an early warning sign for atrocities, according to Ryan McCannell, director of USAID’s Center for Conflict and Violence Prevention.

McCannell said USAID likewise plays a critical role in supporting atrocity prevention by addressing underlying risk factors and bolstering resilience to shocks that can lead to mass atrocities. It does this work through its worldwide staff.