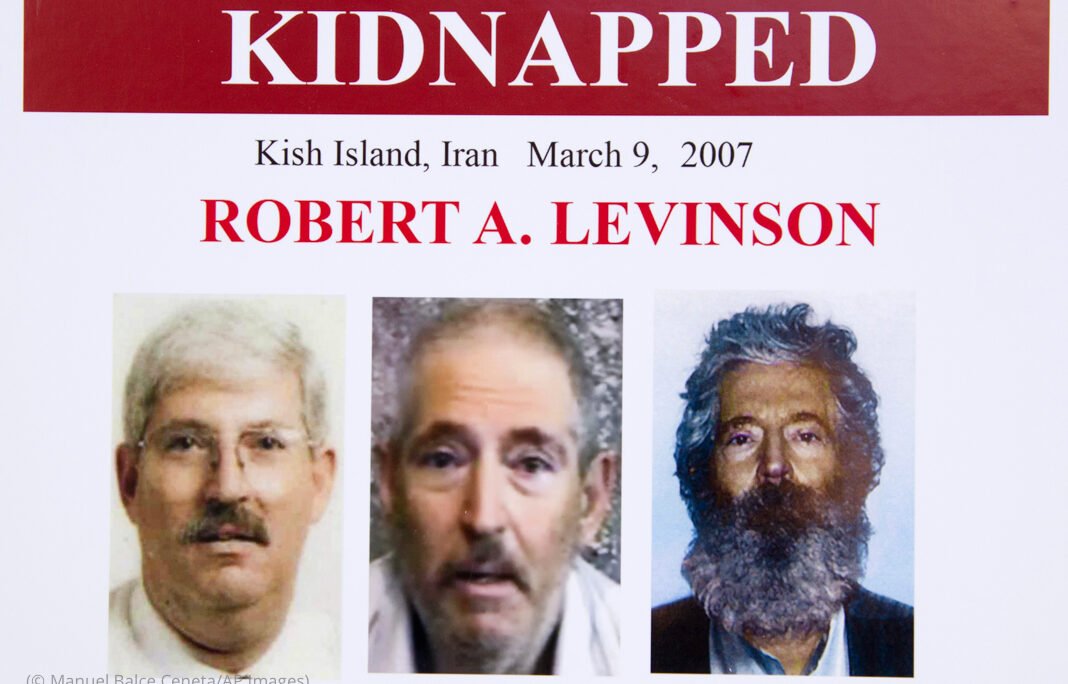 FILE - In this March 6, 2012, file photo, an FBI poster showing a composite image of former FBI agent Robert Levinson. At right, is a photo of how he would look like after five years in captivity, and an image, center, taken from the video, released by his kidnappers, and a picture before he was ki

The United States has imposed sanctions on two senior Iranian intelligence officers involved in the kidnapping and detention of Robert Levinson, the longest-held hostage in U.S. history.

U.S. Treasury Secretary Steven T. Mnuchin on December 14 announced sanctions against Mohammad Baseri and Ahmad Khazai, senior officials in Iran’s Ministry of Intelligence and Security, who were involved in Levinson’s abduction, detention and probable death, according to U.S. officials.

“The abduction of Mr. Levinson in Iran is an outrageous example of the Iranian regime’s willingness to commit unjust acts,” Mnuchin said in a statement.

Taking hostages has been a hallmark of Iran’s regime since Islamic fundamentalists took over the government in 1979. Soon after, radicals stormed the U.S. Embassy in Tehran and held 52 Americans hostage for 444 days.

Today, the United States is designating two senior officials of Iran’s Ministry of Intelligence and Security who were involved in the abduction, detention, and probable death of Robert Levinson. We will not relent in pursuing those who played a role in his disappearance.

Robert Levinson, a former FBI agent, disappeared on Iran’s Kish Island in March 2007. Levinson’s family said in March that Levinson died in the custody of the Iranian regime.

While Iran’s regime pledged assistance in returning Levinson to the United States, it instead launched a disinformation campaign to deflect responsibility for the kidnapping, according to U.S. officials.

“The truth is that Iranian intelligence officers — with the approval of senior Iranian officials — were involved in Bob’s abduction and detention,” FBI Director Christopher Wray said in the Treasury statement.

The United States has previously designated Iran’s Ministry of Intelligence and Security in connection with human rights violations against Iranians who protested the regime’s fraudulent June 2009 election.

Baseri and Khazai are high-ranking members of Iran’s intelligence ministry. Baseri is involved in counterespionage activities inside and outside of Iran while Khazai has led Iranian intelligence delegations to other countries to assess security, U.S. officials say.

The Treasury Department sanctions prohibit the two men from conducting business or accessing property in the United States.

“The Iranian regime has a 41-year history of abducting and detaining foreigners and dual nationals as political leverage,” Secretary of State Michael R. Pompeo said December 14. “We reiterate our strong warning to U.S. citizens and dual nationals that traveling to Iran may jeopardize their personal safety.”