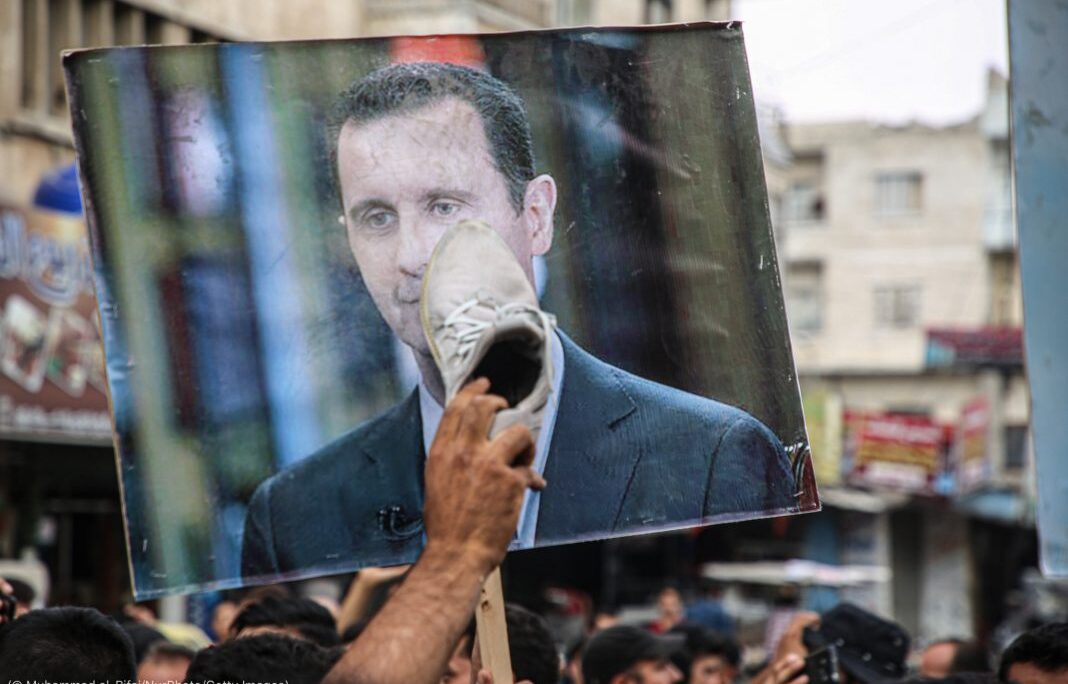 A protester rubs a shoe on a picture of Bashar al-Assad in Idlib, Syria, on September 11. (© Muhammad al-Rifai/NurPhoto/Getty Images)

U.S. Secretary of State Michael R. Pompeo announced the new sanctions September 30, following the three-year anniversary of the killing of at least 34 Syrians in the town of Armanaz in northwestern Syria on September 29, 2017.

“Since then, thousands of Bashar al-Assad’s bombs have been dropped on schools, hospitals, and markets across Syria,” Pompeo said in a statement. “Too many lives have been lost in Assad’s futile search for a military conquest over his own people.”

This is the fourth set of sanctions related to the Caesar Syria Civilian Protection Act of 2019, the U.S. law that aims to hold Assad and his enablers accountable for their crimes against the Syrian people and help bring the conflict in Syria to a peaceful end.

The new sanctions target 17 Assad associates and businesses, including military and government officials, as well as financial supporters of the regime.

Meanwhile, the United States on September 24 announced more than $720 million in humanitarian aid to address the Syrian crisis, bringing U.S. aid to over $12 billion since the crisis began in 2011.

U.S. Special Representative for Syria Engagement James F. Jeffrey told a September 29 meeting on the sidelines of the U.N. General Assembly that the U.S. seeks a solution to the conflict consistent with U.N. Resolution 2254, which calls for a Syrian-led peace process that would end the suffering.

“The evidence of the regime’s atrocities, some of which rise to the level of war crimes or crimes against humanity, is overwhelming,” Jeffrey told the meeting hosted by the Syrian Network for Human Rights.

The Organisation for the Prohibition of Chemical Weapons has found evidence that chlorine gas was used in attacks in Saraqib, in February 2018, and in Douma in April of that year. Both attacks occurred in rebel-held areas that the Assad regime was fighting to take back. The attack in Douma killed dozens of civilians, while 11 people were injured at Saraqib.

According to the Syrian Network for Human Rights, 150,000 Syrians have been arbitrarily arrested since 2011 and 6 million people have fled the country.

Today, the U.S. sanctioned 17 of Assad’s corrupt military, government, and business leaders, as well as firms profiting from the Syrian conflict. Their actions victimize the Syrian people and needlessly prolong their suffering. UNSCR 2254 is the only path forward.

The newly announced U.S. State Department designations target Milad Jedid, commander of the 5th Corps of the Syrian Arab Army, who has disrupted efforts to achieve a ceasefire. Also targeted are Nasreen Ibrahim and Rana Ibrahim, adult sisters of Assad financier Yasser Ibrahim, who act as a front for Assad and his wife’s financial interests.

The U.S. Department of the Treasury is designating Syrian businessman Khodr Taher Bin Ali, who serves as an intermediary to the Syrian Arab Army’s Fourth Division, and his various business entities. The measures also target Husam Muhammad Louka, head of the Syrian General Intelligence Directorate, and Hazem Younes Karfoul, governor of the Central Bank of Syria.

“Those who continue to stand with the brutal regime of Bashar al-Assad further enable its corruption and human rights abuses,” said U.S. Treasury Secretary Steven T. Mnuchin in a September 30 statement. “The United States will continue to employ all of its tools and authorities to target the finances of anyone who profits from or facilitates the Assad regime’s abuse of the Syrian people.”