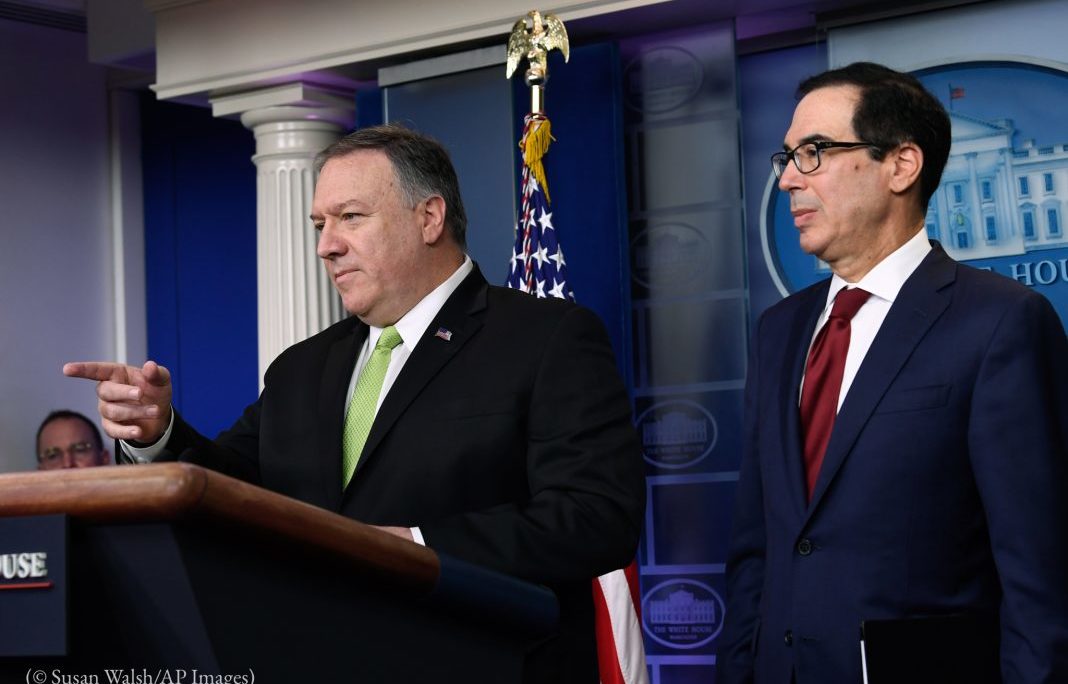 The new sanctions hit the regime’s senior Iranian leaders involved with the brutal crackdown on demonstrators during nationwide protests late last year.
Also sanctioned: the commander of the Basij Resistance Force, which uses child soldiers to export terror and crackdown on domestic dissent.

“They’ve carried out his terrorist plots in destabilizing campaigns across the Middle East and around the world,” Pompeo told reporters during a news conference at the White House with Treasury Secretary Steven T. Mnuchin. “They’ve trained militias in Iraq, Syria and elsewhere in the arts of domestic repression.”

Pompeo said in a tweet, “Maximum pressure on the Iranian regime continues.” Through economic sanctions, the U.S. is pursuing a maximum pressure campaign to compel Iran’s regime to permanently scrap its nuclear weapons ambitions and halt its terrorist financing.

The secretary said the campaign has deprived the Iranian regime of billions in revenue that the regime uses to fuel death and destruction across the Middle East and the world.
The latest sanctions follow a spate of recent attacks by Iran and its proxies, including rocket and ballistic missile strikes on U.S. and coalition bases in Iraq, and the storming of the U.S. Embassy compound in Baghdad.

New sanctions targeting Iran’s metals sector will deny steel, aluminum, copper and iron manufacturers billions in annual revenues. The regime has used profits from the metals sector to support its destabilizing behavior abroad. To facilitate the effort, President Trump January 10 issued a new executive order that authorizes Pompeo and Mnuchin to impose future sanctions on additional sectors of the Iranian economy, such as mining, manufacturing, and textiles.  “The goal of our campaign is to deny the regime the resources to conduct its destructive foreign policy,” Pompeo told reporters. “We want Iran to simply behave like a normal nation.”