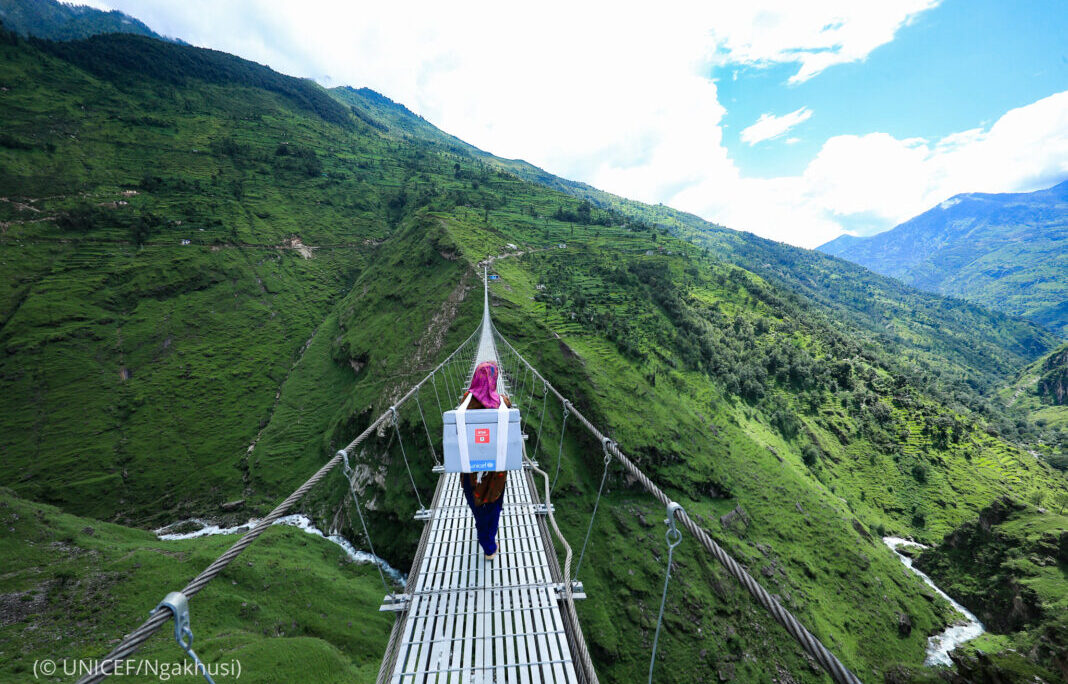 © UNICEF/UN0498812/Prasad Ngakhusi. On 3 August 2021 in Darchula District in Nepal's remote far-west, Birma Devi Kunwar takes Johnson & Johnson COVID-19 vaccines - donated by the US Government to Nepal through the COVAX Facility - from the district vaccine store to the Pipalchauri Health Post

The United States and international partners are ensuring COVID-19 vaccines reach people in remote and traditionally underserved communities around the world.

The United States is providing more than 600 million safe and effective COVID-19 vaccine doses — with no political strings attached — to developing countries and economies. Most donations are through COVAX, an international partnership designed to equitably distribute vaccine doses to protect people who are most at-risk.

World Health Organization (WHO) representative to Somalia Dr. Mamunur Rahman Malik said it is critical that vaccines reach all people equitably. An estimated 26 percent of Somalians are nomadic, and roughly 2.6 million people in the country are displaced.

“It is only with support from donors such as the Government of the United States of America that [we will] be able to reach all eligible people, particularly vulnerable populations and those living in difficult-to-reach locations,” he said.

The United States also supports UNICEF and the World Food Programme, which are ensuring vaccines reach isolated communities, including some not accessible by road.

UNICEF delivers vaccines by boat to islands on Lake Bunyonyi in southwestern Uganda. “I am very happy that the vaccines have been brought closer to us,” said Aaron Twinomujuni, a science and math teacher on Bwama Island, after receiving a vaccine dose.

In Nepal, COVID-19 vaccine distribution efforts benefit from UNICEF’s long-standing effort to develop cold-chain infrastructure, such as cold rooms, refrigerators and freezers at provincial and local levels, as well cold storage boxes. These are needed to safely transport vaccines.

“Everyone should be given a chance to protect themselves,” Bir Singh Kunwar, 55, of Nepal, said after receiving a vaccine dose through COVAX.

The United States also supports Jordan and Bangladesh’s vaccination campaigns. Both nations are vaccinating refugees from neighboring countries. Bangladesh, which has received 6.5 million U.S.-donated vaccine doses, is working to vaccinate Rohingya refugees, who live at Cox’s Bazar in southeastern Bangladesh near the border with Burma.

In August, the Government of Bangladesh vaccinated 36,943 of 43,093, or 85.7%, of Rohingya refugees, aged 55 and older, living at Cox’s Bazar, according to the United Nations High Commissioner for Refugees.

The United States has trained more than 3,200 health care workers and volunteers in Bangladesh to administer vaccines or otherwise support the country’s vaccination efforts.

Aesha, a 62-year-old refugee from Syria, got her vaccine after a COVAX delivery to the Za’atari refugee camp in Jordan in March. COVAX, which has received $4 billion to support vaccinations worldwide, delivered additional doses to the camp in April and May.

“The vaccine is protection for us all,” Aesha said. “I am very grateful.”