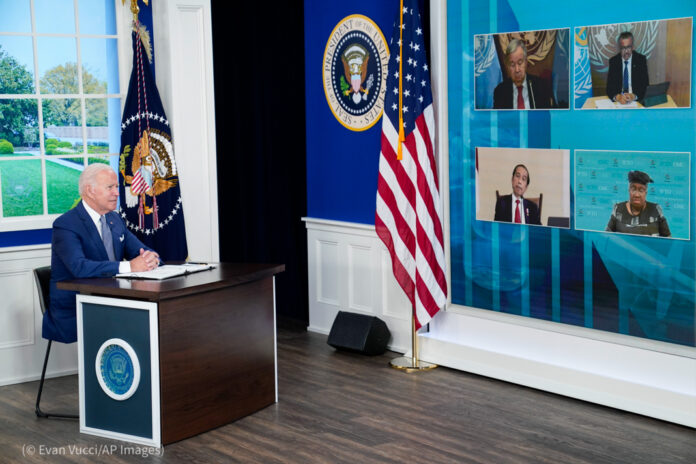 From the White House, President Biden announces a doubling of U.S. global vaccine donations during a virtual summit convened on the sidelines of the U.N. General Assembly. (© Evan Vucci/AP Images)

The United States will ship an additional 500 million doses of COVID-19 vaccines to countries around the world and form new partnerships to accelerate the recovery from COVID-19, President Biden announced September 22.

“The good news is, we know how to beat this pandemic: vaccines, public health measures, and collective action,” Biden said at a global COVID-19 summit convened virtually on the sidelines of the U.N. General Assembly. “Governments can do a lot, but we cannot do everything alone.”

The president said the United States will donate, not sell, 500 million additional doses of the Pfizer-BioNTech COVID-19 vaccines to low-and middle-income nations, bringing the total number of vaccines the U.S. has donated to over 1.1 billion doses.

The United States has already shipped nearly 160 million doses to 100 countries — donating more vaccines than all other countries combined.

Biden said that United States is donating three doses to the world for every one shot administered in the United States.

The president also announced a new partnership between the United States and the European Union to ensure vaccines are distributed equitably to nations in need. The United States continues to support COVAX as the world’s vaccine distributor.

Other efforts include the following:

The United States and its allies support the World Health Organization’s goal to vaccinate at least 40 percent of the world’s population by the end of 2021 and 70 percent by September 2022.

“We also know from experience that getting those vaccines into people’s arms may be the hardest logistical challenge we’ve faced,” Biden said. “That’s why we need to significantly step up our investment in helping countries get shots in arms.”

To reduce the spread of the virus, the United States will provide $1.4 billion to supply oxygen units, support expanded testing and strengthen health systems worldwide. The goal is to have sufficient oxygen facilities in all nations by the end of 2022.

“Simply put, we will use every tool we have to stop the spread of the virus,” Blinken said. “If we work together with the unity and urgency required at this moment, we can end the pandemic.”