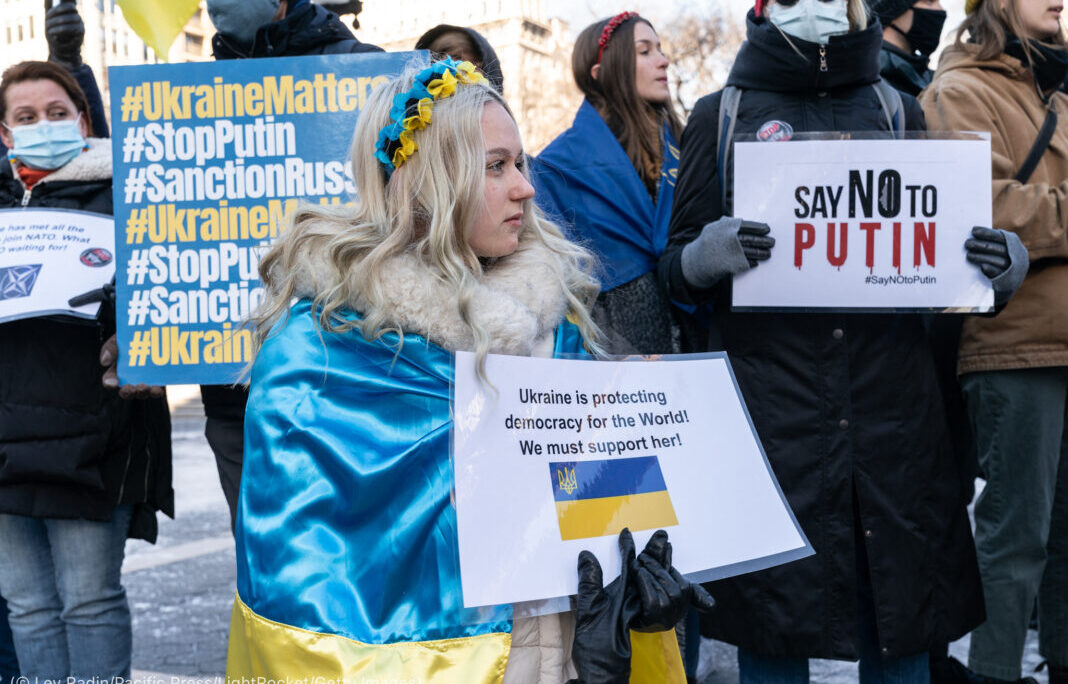 Protesters in Union Square hold placards during a rally in New York on January 22 in support of Ukraine and against Russia. (© Lev Radin/Pacific Press/LightRocket/Getty Images)

Ukrainian Americans continue to express solidarity with family and friends in their native homeland. They worry amid threats of another Russian invasion.

“We stand with Ukraine and against Russian aggression against a sovereign nation,” Ihor Diaczun, president of the Illinois Division of the Ukrainian Congress Committee of America, said during a December rally in Chicago. “Our rally rejects the Russian lies and disinformation.”

That sentiment is shared by Ukrainian Americans across the United States who oppose Russia’s military buildup along Ukraine’s borders and pray for a peaceful resolution.

Marie Zayycky, a member of the Ukrainian American Civic Committee of Metropolitan Detroit, said she and other local Ukrainian natives strongly support the “Ukrainian peoples’ right to live free and in peace in their own land.”

“We want an end to constant anxiety and fear,” she told the Macomb Daily.

Olena Danylyuk, also a member of the committee, said Ukraine built its economy and restored its language and culture as distinct from Russia after voting in 1991 for independence from the former Soviet Union.

She said countries need to live up to the 1994 “Budapest Memorandum,” in which Ukraine agreed to give up its nuclear weapons in exchange for the other countries’ agreeing “to respect the independence and sovereignty and the existing borders of Ukraine” and “to refrain from the threat or use of force” against Ukraine.

“[Russian President Vladimir] Putin still wants to bring the Soviet Union back to life,” said Danylyuk, a native of Lviv. “Ukraine is a very important part of that idea.”

She has family members who live in western Ukraine, close to Poland. “My parents are relatively safe, but they are scared,” she said.

Other Ukrainian Americans warn about the consequences of continued Russian aggression. “If Putin crosses the border, you’re talking about a massive humanitarian disaster,” said Eugene Luciw, president of the Philadelphia Branch of the Ukrainian Congress Committee of America.

Luciw’s parents fled Ukraine as refugees during World War II. He views Russia’s current threats as a continuation of Russia’s 2014 invasion of Ukraine.

“For eight years, [Ukrainians have] been laboring under this constant worry of what’s going to happen to them next because they know they’re a target for Vladimir Putin,” he told 6ABC.com.

Anna Shepko said the Catskill Mountains in New York, where she lives, remind her and other Ukrainian immigrants of their homeland. Every weekend, she attends church, where services are presented in English and Ukrainian.

“Ukrainians don’t deserve to be suppressed all the time,” she told Hudson Valley Spectrum News 1.

Shepko said hopes that Allied nations can help Ukraine. “In any way, whatever is possible, they should stop Russia because it will not stop by itself,” Shepko said.

The threat of invasion is not far from Ukrainian Americans’ minds. “Everybody in the Ukrainian community is talking about it,” said Peter Fil, first vice chairman of the Ukrainian-American Cultural Center and a professor at Hudson Valley Community College. He has family in Ukraine. “It’s serious for the rest of the world,” he told the Times Union.

“We need to pray for peace,” the Reverend Timothy Tomson, pastor of St. Mary’s Ukrainian Orthodox Church in McKees Rocks, Pennsylvania, told the Tribune-Review. Tomson’s wife and grandparents are from Ukraine.

Helen Guzensky of Monessen, Pennsylvania, told the Tribune-Review that her father, Aleck Fall, came to America from Ukraine to be free and work in a steel mill. Guzensky’s father taught her and her brother the Ukrainian language.

“If he was still alive today, he would be in terrible despair,” said Guzensky, secretary at St. Nicholas Ukrainian Orthodox Church in Monessen. What Russia is doing is “terrible,” she said.

The Reverend Yaroslav Koval, pastor of St. Vladimir Ukrainian Catholic Church in Arnold, Pennsylvania, moved to the United States from Ukraine 10 years ago. He said young Ukrainians have lived in an independent nation free from outside interference and want to continue living in freedom.

“They have a great desire to live in an independent Ukraine, not in Russia,” he said.