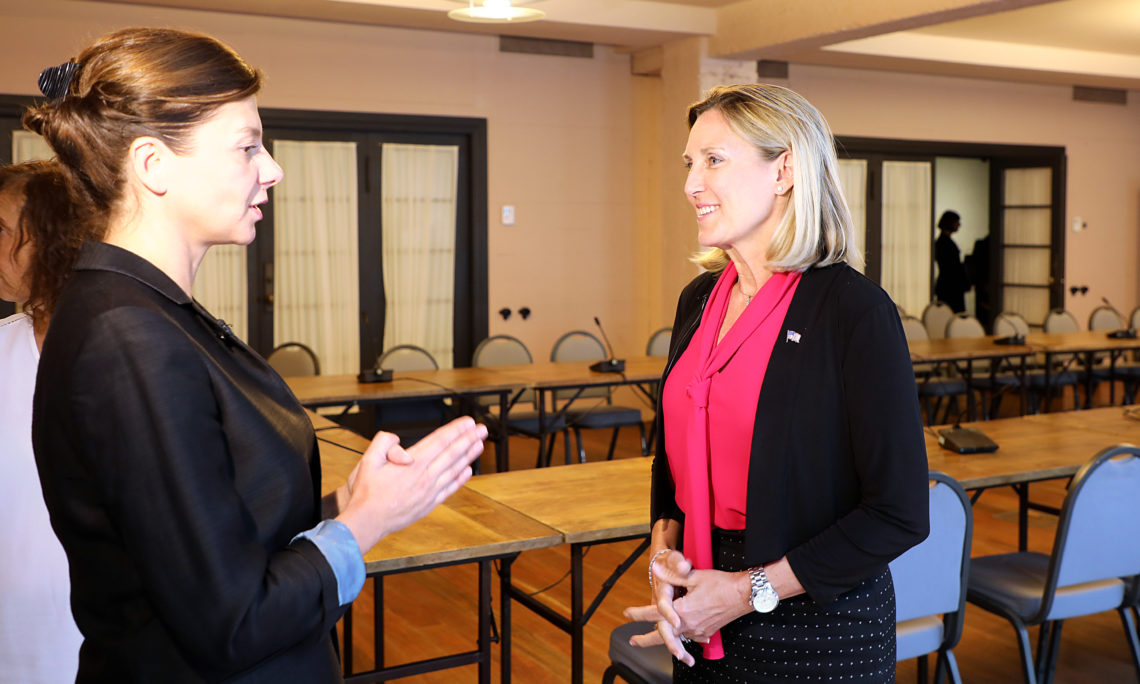 Under Secretary for Arms Control and International Security, Andrea Thompson’s interview with Tabula’s Tamara Chergoleishvili on top of her remarks at the 4th Tbilisi International Conference  – “World in 2018: Upside Down?”

CHERGOLEISHVILI: Are there any plans to restart talks about arms control with Russia? In that sense, where do you see Georgia and where do you see the occupation troops stationed in Georgia, given there are some plans to renew this conversation because we know that Europeans are always keen to talk to Russia about disarmament.

THOMPSON: First of all, I just wanted to say, it’s great to be back in Georgia! My first time as Undersecretary but my second visit–I was here last year with the Vice President. And it’s great to see the continued efforts of the government of our important strategic partner as we look through continued reform. We just had a great exercise with Noble Partner, with our forces partnered up, hosted some of your senior leaders in Washington, and it was just a pleasure to be able to start this morning with a couple of very important ministers and we’ll continue with some meetings this afternoon.

Again, the United States has been very firm that we support the sovereignty, the territorial integrity, and independence of Georgia. We’ll continue to reinforce that. We look forward to working together as we work towards [Georgia’s] NATO membership. We’ve taken great reforms and there’s a great path forward for that, and we’re very supportive of that effort. It was reinforced this Summer and I’m looking forward to having discussions here at the conference about the important way ahead for Georgia. We’ll have discussions with Russia. We’ve had a dialogue with Russia. Ambassador Bolton, our National Security Advisor, just had a meeting with his counterpart. We’ll continue to build on this dialogue. I’m having discussions with some of my counterparts and there’s, again, a dialogue to continue to work through to bring Russia back into compliance. They have not fulfilled their obligations and international ‎commitments we’ll continue to work towards that, in international forms and bilateral too–to work towards it, but the most important part of this visit, it’s about Georgia, it’s about our strategic partnership with Georgia and the United States’ government and the United States’ people and it’s been a great honor. Thanks for the time.

CHERGOLEISHVILI: Thank you so much. And you just mentioned talks of Secretary of State and Mr. Bolton with his Russian counterparts and there are many politicians in Georgia who complain that Georgia isn’t any more on the agenda between the U.S. and Russia, the Russia conversation. Was there a mention of Georgia and the occupation of Georgia, and where do you see that in your conversation with Russia?

THOMPSON: Absolutely. This administration has been very consistent, again, on the sovereignty, the territorial integrity.  You heard it from the Vice President when he was here last year, it’s been in our bilateral discussions, and it’s been in our discussions both with NATO and with other partners. Again, we’re firmly walking shoulder to shoulder with the people of Georgia and look forward to next steps.