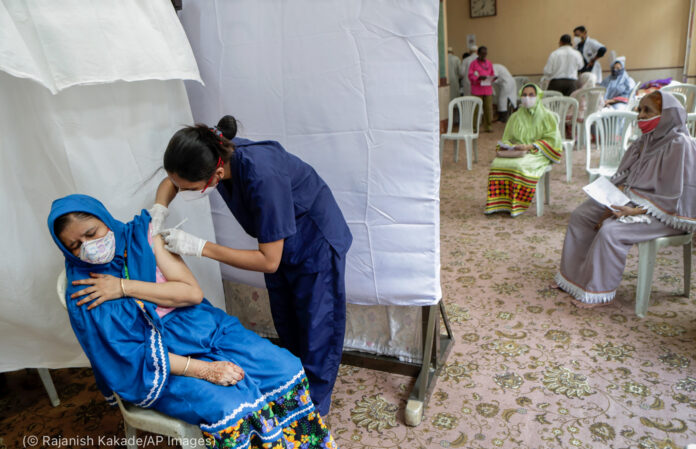 A woman gets inoculated against COVID-19 as others wait their turn at a vaccination center in Mumbai, India, Monday, May 31, 2020. (AP Photo/Rajanish kakade)

The United States has promised to send a projected 80 million COVID-19 vaccine doses to other nations. On June 3, President Biden announced how the first 25 million will be distributed.

In his statement, the president said that at least 75% of the vaccines will go to COVAX — the international partnership working to distribute vaccines to low- and middle-income countries — and up to 25% will go to countries in crisis and experiencing COVID-19 surges, as well as neighbors and partners.

“The United States is committed to bringing the same urgency to international vaccination efforts that we have demonstrated at home,” Biden said.

The U.S. plans to deliver 80 million doses before the end of June. That represents
13% of the total U.S. vaccine production and is five times more than any other country has shared to date.

Nearly 19 million of the first 25 million doses will be distributed through COVAX to more than two dozen countries, including approximately:

The vaccine doses the U.S. is donating are in addition to the $4 billion the U.S. has committed to COVAX and the millions in equipment, tests and therapeutics it continues to provide to countries around the world.

The remaining doses, approximately 6 million, will go to Mexico, Canada, South Korea, the West Bank and Gaza, India, Ukraine, Kosovo, Haiti, Georgia, Egypt, Jordan, Iraq and Yemen, to United Nations front-line workers, and to other countries and entities, as detailed in the White House fact sheet.

The United States does not ask for favors or require concessions from countries in exchange for the vaccines, Biden emphasized.

“We are sharing these vaccines to save lives and to lead the world in bringing an end to the pandemic,” he said.

Additionally, Sullivan made clear that 80 million doses are only the beginning.

The United States “will continue to donate from our excess supply as that supply is delivered to us,” Sullivan said. “Our overarching aim is to get as many safe and effective vaccines to as many people as fast as possible … this is just the right thing to do.”

“Strong American leadership is essential to ending this pandemic now,” Biden said. “The United States will be the world’s arsenal of vaccines in our shared fight against this virus.”