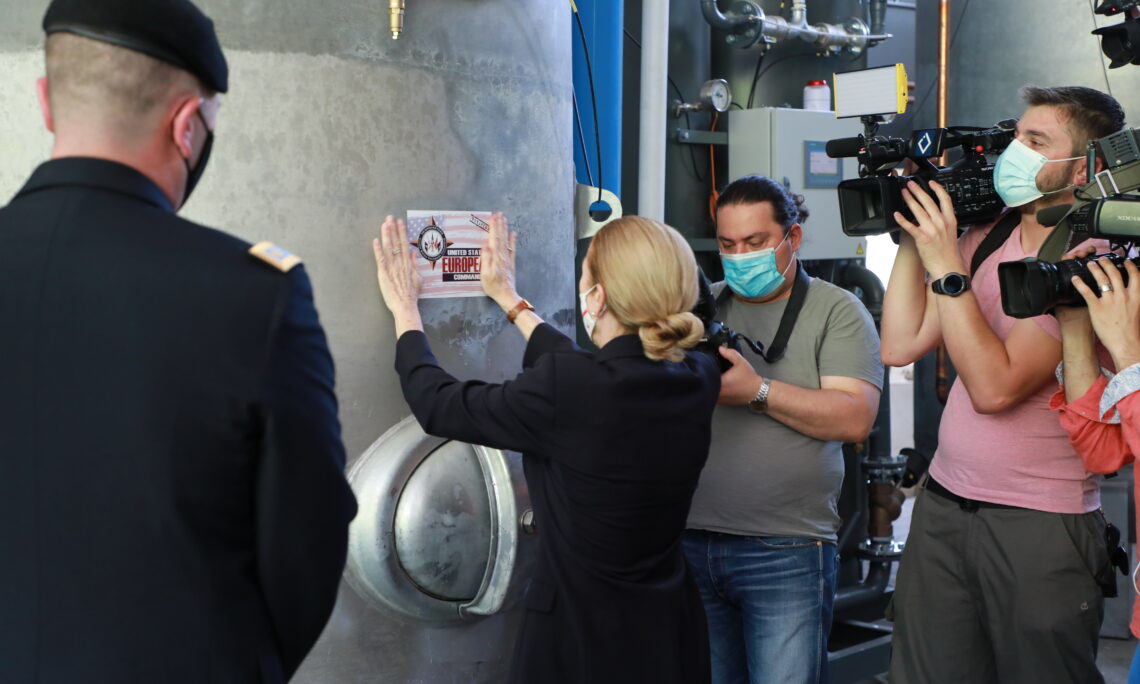 Ending the global COVID-19 pandemic is a top priority for the American people and the U.S. government. To date, the United States has provided more than $9 million in new assistance to Georgia to mitigate the impact of this disease, as well as committing to share vaccine. Through the Office of Defense Cooperation, the U.S. government has now donated an oxygen-generating factory to the Central Republican Hospital in Tbilisi.

This equipment, valued at $155,000, will provide highly concentrated oxygen to patients in individual beds and ensure that all 300 beds mobilized for COVID-19 patients receive proper oxygen supply.

Ambassador Kelly Degnan participated in the hand-over ceremony today. The donation of the equipment was made possible through the US EUCOM Humanitarian Assistance program, with the support of the Georgian National Guard.

Ambassador Kelly Degnan: Well, this is a great event because this is an oxygen-generating factory that the United States’ Department of Defence European Command is donating to the Central Republican Hospital. This factory generates high concentration oxygen for patients in 300 beds to help them get through the very worst of the COVID virus. We are very, very pleased to be able to donate this life saving facility so that more Georgians who are still struggling with COVID will come through it successfully. This is an example of the United States’ continuing commitment to Georgia’s efforts to  fight and contain the Covid pandemic, and I am very pleased to see that we are able to continue our help.

Ambassador Kelly Degnan: This is really pretty simple.  The United States and Georgia’s international friends are here to support Georgia’s efforts to join NATO and to join the European Union. To become a member of those organizations, NATO and the EU, Georgia needs to have an independent judiciary. We have been working with Georgia very well for the last 25 years to help Georgia build a strong independent judiciary. That’s why we were so pleased to see Georgia’s political leaders negotiate and agree to judicial reform in the April 19th Agreement, and that is all we are asking for, that which they agreed to, what they negotiated, what is important for continuing judicial reform that Georgia needs is to comply with those commitments in the April 19th Agreement.

I had the opportunity to discuss this with the Speaker and the chairman of the Georgian Dream party this morning. Again, I think there is a very good roadmap in the April 19th Agreement, it includes pausing Supreme Court appointments until there has been broad, inclusive, multiparty consultations regarding ambitious judicial reform.

The April 19th Agreement was a pledge by the ruling party and opposition leaders to ambitious judicial reform through a broad, inclusive, multiparty process. That hasn’t happened yet, and something as important as appointing Supreme Court Justices for lifetime terms should happen after there has been broad, inclusive, multiparty discussion of the requirements. That’s is what the April 19th Agreement is, that is all we are encouraging the parliament to do. The High Council of Justices put nominations forward that are now in parliament’s hands and parliament’s authority to pause this process while they conduct the kind of inclusive consultations that they very successfully did with the electoral reform law. This is not something that needs to take weeks, years, months.  It is something that could be done, and it would be to the benefit of Georgia’s judiciary. That was reiterated by Senator Risch, Senator Shaheen, Senator Johnson in their statement yesterday — to help Georgia build a strong independent judiciary so that it will be eligible  for NATO and EU membership. That is what we are here for, that is what we have been supporting for over 25 years, and the United States stands ready to continue to offer that support.

Ambassador Kelly Degnan: I am very pleased that we are going to be able to do this. The government of Georgia has been working very hard, really since the pandemic started, to line up vaccines and that has been quite complicated. And we have been anxious to be able to do our part to contribute. Now it looks like we are getting to that point, but the details, because it is such a large campaign in the United States – over 80 million doses that are going to be distributed – a lot of the details are still being worked out. We are in a very close coordination with the Ministry and NCDC here in order to ensure that as soon as we can get these vaccines here [inaudible] we will because we are anxious to see more Georgians get vaccinated.  That is how this economy is going to open up again.  That is how we are going to be able to start enjoying visiting our friends and families. So, the United States is really anxious to be able to get these vaccines here, and we are doing everything we can to help the government of Georgia to make that happen soon. Thank you.