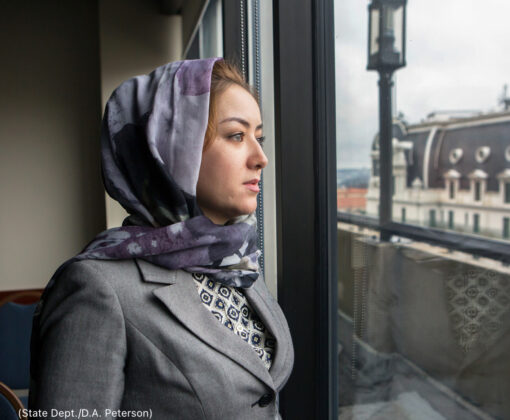 Mihrigul Tursun has co-authored a book about her experiences in PRC detention. (State Dept./D.A. Peterson)

When Gulbahar Haitiwaji returned to Xinjiang, China, in November 2016 after a decade in France, she stepped into a nightmare. She had been summoned back by her employer, purportedly to complete her retirement paperwork. Instead, local authorities arrested Haitiwaji and sent her to an internment camp.

Her story is not unique — since 2017, the People’s Republic of China (PRC) has detained more than 1 million Uyghurs, who are predominantly Muslim, and members of other ethnic and religious minority groups in such camps.

“A hundred times over I thought, when the footfalls of guards woke us in the night, that our time had come to be executed,” Haitiwaji writes in her account of more than two years in detention, Rescapée du goulag chinois (Survivor of the Chinese Gulag). The book, scheduled for English publication in February, was excerpted in The Guardian.

She says she suffered torture and other abuses before her release in August 2019, after the French government intervened on her behalf.

Haitiwaji is one of numerous survivors of PRC internment camps whose stories are helping to drive an international outcry. She and Mihrigul Tursun, who also survived PRC internment, testified before the Uyghur Tribunal, a nonjudicial entity composed of an international group of attorneys, academics and NGO representatives, established in the United Kingdom in 2020 to investigate PRC abuses against Uyghurs and others in Xinjiang.

When Tursun returned to Xinjiang from Egypt to visit family in May 2015, she was detained, and her newborn triplets taken from her. She suffered interrogation, isolation and torture, she says.

“Each time I was electrocuted, my whole body would shake violently and I could feel the pain in my veins,” she testified before the tribunal (PDF, 162 KB) in June 2021. “I thought I would rather die than go through any more of this and I begged them to kill me.”

When released, she was told one of her sons had died of health complications.
In December 2021, the legal scholars at the Uyghur Tribunal concluded that the PRC has committed crimes against humanity (PDF, 789 KB) and genocide against Uyghurs.

While these former detainees recount their experiences in Xinjiang, other efforts to highlight Uyghur internment on an international stage have been stymied. In April 2017, Uyghur rights advocate Dolkun Isa was not permitted to attend a U.N. meeting on indigenous issues, according to Human Rights Watch (HRW).

HRW said blocking Isa from the U.N. meeting points “to larger concerns about the treatment and protection of human rights activists critical of China as they seek to participate in UN human rights mechanisms — intended to protect the rights of all.”

As she related to a U.S. congressional panel in 2018, “[I] decided to tell the world about China’s hidden concentration camps so those people who tortured me and others would be punished for what they did and the voice of those innocent people in the camps could be heard.”

Recent events indicate that PRC internment survivors’ stories are having an effect. In October 2021, the United States, France, Luxembourg, Belgium and 39 other countries, in a joint statement at the United Nations, urged the PRC to respect human rights and allow independent observers “immediate, meaningful and unfettered access” to Xinjiang, citing reports of arbitrary detention and other abuses.