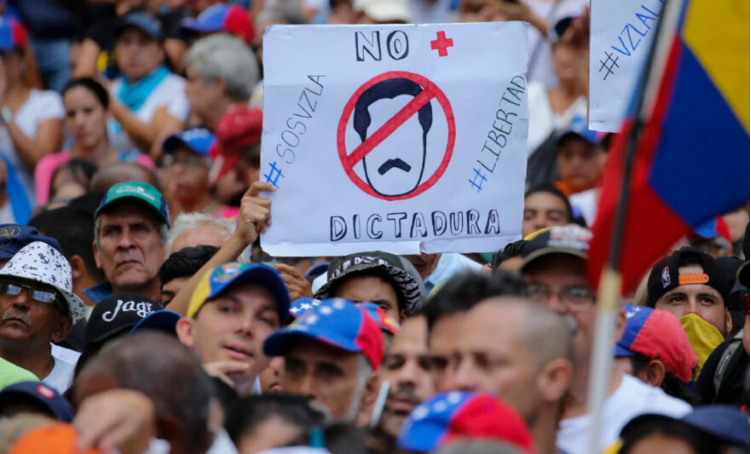 What Is Going on in Venezuela?

On January 10, 2019, Nicolás Maduro illegally claimed the presidency of Venezuela, despite global condemnation of a rigged election. As he has done for years to retain power, Maduro manipulated the electoral process and timeline to his advantage; electoral irregularities included everything from intimidation and disenfranchisement of voters to improper tabulation of the results to outright bans on the participation of Venezuela’s most popular political parties and candidates. Maduro and his inner circle have continued to imprison civic, military, and political leaders and have used the distribution of food as a tool for social control.

A Country in Crisis

The economy and basic social services continue to spiral downward. The humanitarian crisis is further exacerbated by the COVID-19 pandemic. For example:

Hope for the Future

Interim President Guaido and numerous opposition leaders are calling for and actively working towards free, fair, and transparent presidential elections.  They are also working to expose the lies of the Maduro regime, provide adequate health care, and raise international awareness of the real crisis being faced by Venezuelans.

The U.S. effort to support the Venezuelan people and restore democracy is centered on three pillars.

The United States stands with the brave people of Venezuela as they strive for a return to dignity and democracy.

On March 31, the United States proposed a pathway to resolving Venezuela’s crisis by means of a peaceful, democratic transition. This framework calls for the establishment of a broadly acceptable transitional government to administer free and fair presidential elections, and lays out a pathway to lifting Venezuela-related U.S. sanctions. This framework protects the interests and equities of all Venezuelan people and provides a path to restore democracy. We urge all parties to consider the Democratic Transition Framework as a pathway towards a peaceful, stable, and prosperous Venezuela.

U.S. actions ensure the illegitimate Maduro regime cannot rely on the U.S. financial system for its destructive practices. The U.S. government has made over 300 designations of individuals and entities in Venezuela since 2017 via Executive Orders (E.O.) and the Kingpin Act. Learn more about these actions here. More details on the U.S. Department of Treasury Sanctions are located here.

In addition, the United States has imposed visa restrictions on individuals responsible for undermining Venezuela’s democracy, including numerous Maduro-aligned officials and their families, pursuant to Presidential Proclamation 9931 and other consular related authorities. The United States has revoked hundreds of visas for individuals that fall under these criteria, preventing U.S. travel.

The United States is working alongside a global network of partners to help Venezuelans return their country to a prosperous democracy and hold Maduro and those who support him accountable for the current political, economic, and humanitarian crises. On January 24, 2019, the United States and 15 other OAS member states recognized Juan Guaidó as the interim President of Venezuela. The Lima Group, consisting of 16 countries in Latin America, was founded in 2017 to find a peaceful resolution to the Venezuelan crisis and has been committed to that goal since. The EU and its member states have also been strong, steady supporters of interim President Guaidó, the National Assembly, and the Venezuelan people as they strive for democracy.

On September 23, 2019 the United States joined 15 countries to invoke the Inter-American Treaty of Reciprocal Assistance (TIAR), known as the Río Treaty, for collective action in support of the Venezuelan people and against Maduro, including by imposing travel restrictions against 29 individuals affiliated with the illegitimate Maduro regime. It was the first invocation of the treaty since September 11, 2001.

On August 14, 2020, the United States joined international partners in a joint declaration calling for a transitional government that will hold free and fair presidential and parliamentary elections.

The United States remains committed to the people of Venezuela, who are suffering the impact of an ongoing political and economic crisis that has led to severe lack of access to food and medicine. Over seven million Venezuelans are in need of immediate humanitarian aid inside Venezuela and more than five million Venezuelans have fled the country in search of a better life. Since Fiscal Year 2017, the United States has provided more than $856 million to help Venezuelans inside Venezuela and across the region, as well as the communities hosting them. This includes:

Find all releases, including remarks by Secretary Pompeo, Special Representative to Venezuela Abrams, and other key actions by the State Department here.