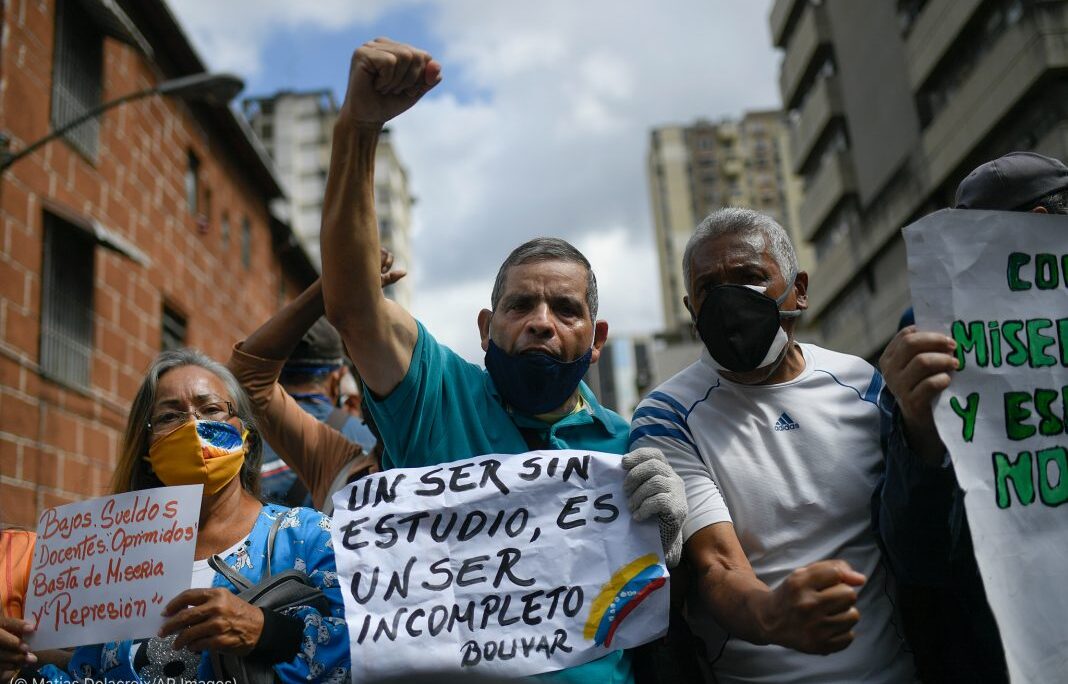 A man shouts slogans as he holds a sign in Spanish, "An uneducated person is an incomplete person — Bolivar," at a demonstration by teachers demanding better salaries in Caracas, Venezuela, on World Teachers' Day, October 5. (© Matias Delacroix/AP Images)

Venezuelans continue protesting the illegitimate regime of Nicolás Maduro, demanding the restoration of basic services and better treatment for teachers.

In one week, from the end of September to the beginning of October 2020, 233 protests swept the country, from rural towns to cities such as Caracas.

There were an additional 113 protests across 24 states in Venezuela during the first week of October, focused on increasing teachers’ annual wage and improving their working conditions.

Teachers, on average, make $6.50 per month, an amount that often forces them to find side jobs, according to local news reports. With frequent government blackouts, lack of school food and limited school supplies, it is difficult for teachers to provide an environment in which students can learn.

“Teachers, you are not alone. We are together in this process,” said Juan Guaidó, interim Venezuelan president, on October 5. “All Venezuelans, the unions, the different sectors, must join and accompany the teachers for the future of Venezuela.”

In September, protesters peacefully took to the streets to demand better basic services in rural towns, like Urachiche — which used to support the Maduro regime. These protesters marched for a restoration of electricity and water and an increase of food amid chronic shortages.

The 2019–2020 National Survey of Living Conditions (ENCOVI, for Encuesta Nacional de Condiciones de Vida) reported only 77% of the population has access to piped running water, and three-quarters of that group say they experience frequent service disruptions. Ninety percent of Venezuelans do not have reliable access to electricity.

Maduro’s response is to deploy the army to stop the hundreds of peaceful protests for basic services, stifling free speech and denying citizens their requests.

These recent protests add to the approximately 7,000 protests reported by Venezuelan media from January to the end of September 2020.

“These dire conditions are not the result of war or natural disaster. These are the results of an inept authoritarian leader systematically decimating Venezuela’s democratic institutions, economy, and infrastructure through misappropriation of state funds and the abuse of state power,” said the State Department’s Michael Kozak on October 19.