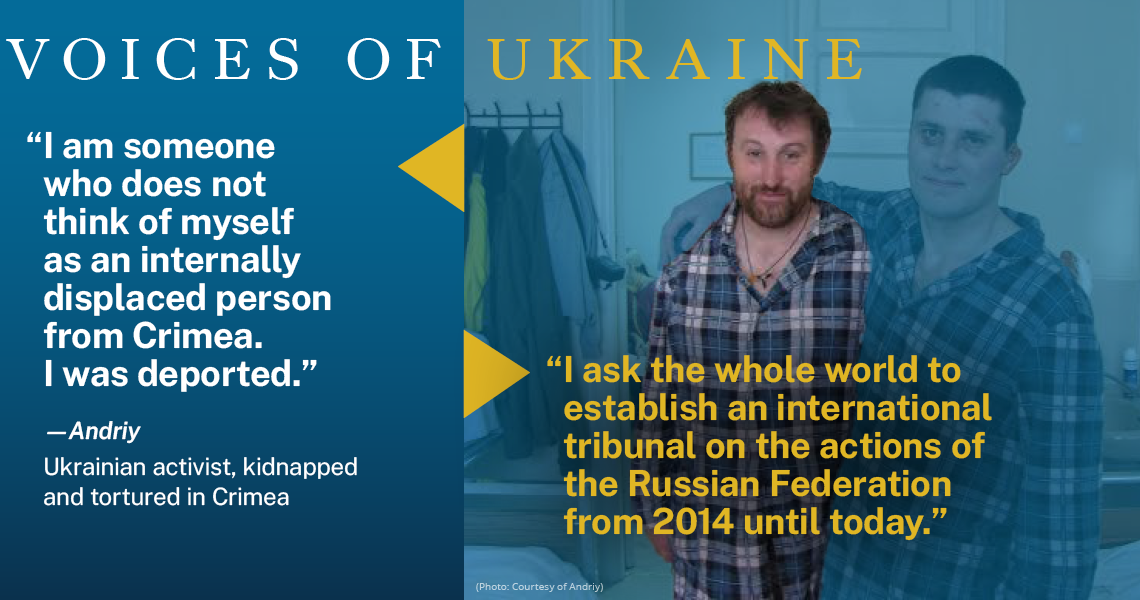 This is part of a series of articles highlighting the costs of President Vladimir Putin’s aggression in Ukraine. We conducted our interviews with Andriy before and after Russia’s military launched its full-scale war on February 24.

At that time, Andriy and his wife and three sons lived in the ancient town of Bakhchisarai in Crimea. During the occupation, Andriy and other residents participated in nonviolent protests against Russia’s occupation near their town’s monument to Taras Shevchenko, a 19th century Ukrainian poet and proponent of Ukrainian independence.

On March 9, 2014, Russian forces kidnapped Andriy and a friend at the Simferopol railway station. He was detained inside the basement of a military enlistment office from March 9–20, 2014. There he said he was beaten, stripped and connected to an electric current.

“The whole world needs to know that Crimea was forcibly occupied,” Andriy said. “Any negotiations about legalization of the annexation of Crimea as part of the Russian Federation is illegal.”

Over the last eight years, Russia has tried to stamp out basic freedoms in Crimea. “Ukrainians in Crimea do not have the opportunity to get an education today, or even go to their church,” Andriy said.

During that time, Russian forces:

Today, Andriy works to combat disinformation and support fellow Ukrainian citizens displaced by the war. He is confident that Ukraine will win back full control of its territory, including Crimea.

“I put in a lot of effort to return Crimea back to Ukraine,” he said. “And it will happen sooner or later.”

Learn more about Andriy’s story in this short video and from other Ukrainians, including Oleksandr, Nataliya, Stanislav and Andriana.