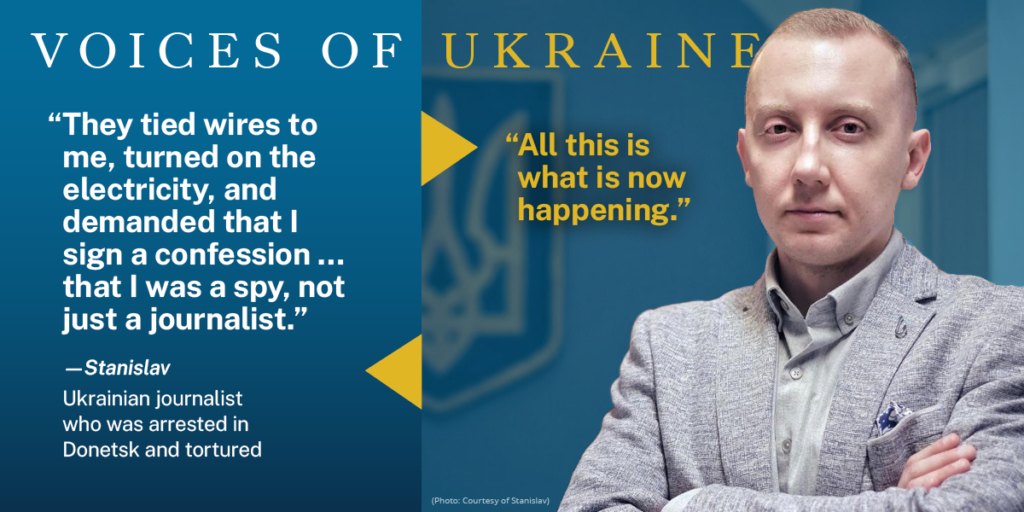 This is part of a series of articles highlighting the costs of Vladimir Putin’s aggression in Ukraine. This interview took place before the Russian military further invaded Ukraine on February 24.

Stanislav remembers when the Russian military invaded the Donbas region of Ukraine in 2014 and took control of the city of Donetsk. He was 24 at the time. All his life he lived in Donetsk or nearby Makiivka in eastern Ukraine. He graduated from Donetsk University with a degree in philosophy and religious studies and was planning to obtain a graduate degree. He called Donetsk one of the great cities of Europe before 2014. The city had a proud diversity of religious groups: Buddhists, Orthodox, Catholics and Protestants.

He said his life became surreal after the 2014 invasion. There was no drinking water in the city for one week. His family had to collect snow in buckets and melt it for use. Later that summer he heard the constant firing sound of mortars, shells and tanks. He stayed in the territory controlled by the Russian military — because he couldn’t imagine leaving his mother and two grandmothers behind.

Arrested in 2017 for reporting on Russia’s abuses

In 2015, Stanislav began working as a journalist under a pseudonym out of fear of retaliation by Russia-backed forces running the city of Donetsk. He filed 50 reports until his arrest in 2017.

Local police stopped him and demanded identification. Minutes later, individuals in plain clothes handcuffed and blindfolded him, threw him in a van and drove him to the Ministry of State Security. Then the torture began.

“They tied wires to me, turned on the electricity, and demanded that I sign a confession that I was cooperating with the Foreign Intelligence Service of Ukraine, that I was a spy, not just a journalist,” he said.

He said he believes he was arrested as a journalist because he was reporting on the Russian government’s activities.

After enduring an hour of torture, Stanislav was coerced into signing the documents as the agents demanded. He was threatened with rape and thrown into a basement, where he was held for more than a month. Following that, he was transferred to another basement, a remnant of the Soviet-era bomb shelter system being used for torturing prisoners, he said.

Stansilav said he believes these were war crimes and that they are continuing. He said he shared his experiences not out of a desire to shock listeners but to inform.

“There are basements, there are torture chambers, there is the humiliation of human dignity and the leveling of all values that the Western world is proud of,” he said. “All this is what is now happening on the Ukrainian borders with Russia.”

What happened to Stanislav took place before Vladimir Putin’s further brutal invasion of Ukraine. In recent days, the Russian military has bombed schools, hospitals, homes and even an area near a Holocaust memorial in Ukraine, forcing hundreds of thousands to flee their communities for safer regions.

Learn more about Stanislav’s story in this short video and about other Ukrainians, including Nataliya and Andriana.