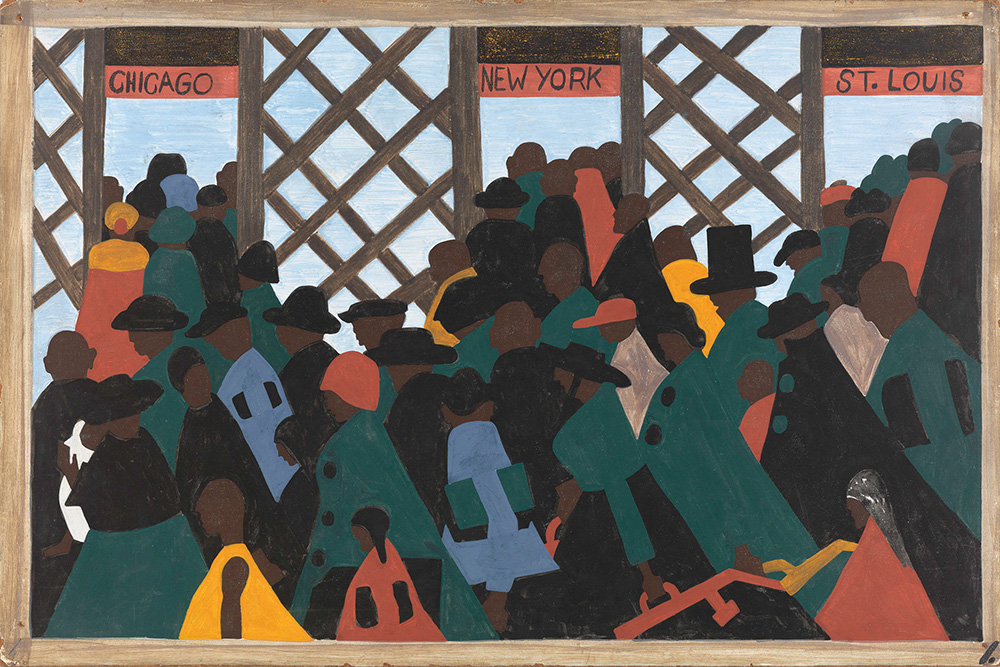 Artist Jacob Lawrence, himself the son of Southern migrants, said he wanted to paint "the excitement, the crowds, the tension" of the Great Migration. (Jacob Lawrence, The Migration Series, Panel 1: During World War I there was a great migration north by Southern African Americans., 1940 and 1941, C

Fifty years after Black Americans ended a period of unprecedented movement in the United States, their journeys reverberate through U.S. culture and demographics.

The Great Migration — which took place from 1916 to 1970 — saw 6 million African Americans move from the South to the North and West. It eclipsed the Gold Rush and the flight from the Dust Bowl in terms of population movement within the U.S., according to Allyson Hobbs, a Stanford University historian. Before this period, 90 percent of Black Americans lived in the South, and after, just 53 percent did, she says.

Black newspapers and other media touted a better life in the North and West. Northern factories were short on labor, and there were new opportunities in the West. Black families were pulled by the lure of higher wages, educational opportunities, and more personal freedom away from the segregation practices of the South.

As Richard Wright wrote: “I was leaving the South to fling myself into the unknown … respond to the warmth of other suns and, perhaps, to bloom.”

A book titled with that quote — The Warmth of Other Suns by Isabel Wilkerson — tells the stories of three ordinary individuals who uprooted their lives during the Great Migration (as did both of Wilkerson’s parents) to explain this time in America.

Wilkerson links the migrants’ actions to President Abraham Lincoln’s decades-earlier Emancipation Proclamation, which paved the way for abolishing slavery in the United States. “By sheer force of will, they were able to make the Emancipation Proclamation live up to its name in their individual lives to the degree that they could,” Wilkerson said in an interview with radio show host Krista Tippett in 2016.

In the South, Black people had been subject to what was essentially a caste system that left them without the chance to reach their potential, Wilkerson says.

The Great Migration was “an unleashing of this pent-up creativity and genius, in many cases, of people miscast in this caste system. It’s about freedom and how far people are willing to go to achieve it,” she says.

It was not necessarily easy, says Marcia Chatelain, a history professor at Georgetown University. For some, there was a gap between the fantasy of moving and how they were treated when they got to new places.

Discrimination followed them north, with areas outside the South reacting to the influx with racial wage gaps and prohibitions on where Black people could live. Chatelain’s own book on the topic, South Side Girls: Growing Up in the Great Migration, looks at the impact of the relocations on young females. “Girls embodied the poignancy — hoping migration would change everything and the reality they still had to deal with racism,” Chatelain says.

But connections among family members split between the South and other areas increased the exchange of ideas among regions of the country. And many Northerners and Westerners sent money home to those who remained in the South.

Southern employers, meanwhile, Chatelain says, faced worker shortages and came to depend more heavily on prison convicts to do tasks during the 20th century.

The legacy of migration

Black people brought their music from the rural South to cities with more venues, recording studios and Black consumer markets. “A lot of roots of what we call popular culture today are a direct result of the migration,” Chatelain says, citing blues, gospel and R&B music, which still influences hip-hop and rap.

The Great Migration brought a flourishing of literature and scholarship too — it informed famous novels like Invisible Man by Ralph Ellison.

The concentrations of Black Americans in the North, where they did not face poll taxes, literacy tests or other obstacles to voting imposed by Southern states, led to more Black elected officials, long before Barack Obama became the first Black U.S. president in 2009.

Chatelain says there are many books about the impacts of the South-to-North/West migration. Writers have found that “regardless of the thread you pull on, you’ll find something new,” she says. “We can all relate to the desire for change, the desire to help our families and the desire to imagine a better future.”