Home Home | News & Events | Why September 12 matters so much 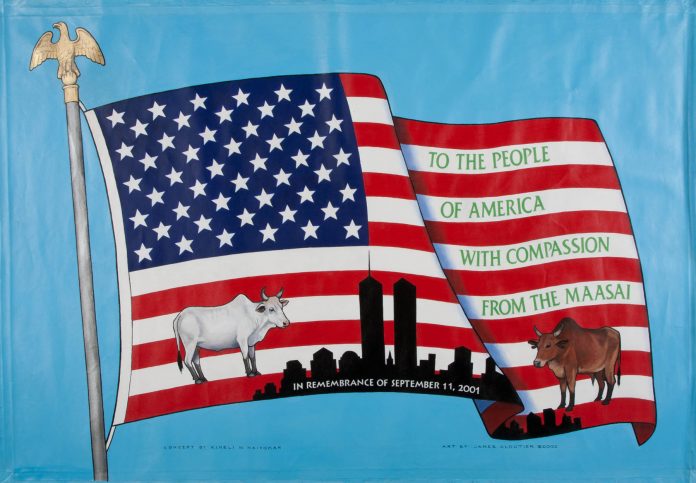 In September 2001, after terrorists attacked the World Trade Center in New York, the Maasai people of Kenya tried to send 14 cows to the people of America.

Wilson Kimeli Naiyomah, who had come up with the idea, explained: “To heal a sorrowing heart, give something that is dear to your own.”

The cows, sacred to the Maasai and a symbol of life, were accepted, in spirit. U.S. officials, on behalf of the American people, agreed that the U.S. would “own” the cows, but asked Maasai herdsmen to care for them in Kenya, thereby avoiding some obvious logistical challenges.

It’s one example of many in which people from around the globe responded generously to a traumatized nation. Their kindness is a focus of the National September 11 Memorial & Museum in New York.

The sentiment of the Maasai is “realized on a global scale after 9/11,” says Noah Rauch, a director at the museum, which features a painting of the cows. Its exhibits also include quilts and murals sent from France, Germany, Japan and several other countries.

Of the nearly 3,000 people killed during the 9/11 terrorist attacks in New York, Virginia and Pennsylvania, 372 were foreign nationals from more than 90 countries.

According to Rauch, visitors to the museum “should leave with a firm understanding of what happened on 9/11 and, just as importantly, an appreciation for how people responded to the attacks.”

“Whether it was first responders rushing into the Twin Towers, construction workers risking their health to help in the rescue, recovery and cleanup period, or people from around the world offering whatever they could to help in the aftermath, these acts offer a fundamental counterpoint to the horror of that day,” Rauch said.

September 12, 2001, the day after the attacks, is the date that marks the start of what became an outpouring of solicitousness from around the world. That outpouring helped many Americans heal.

The empathy of ordinary people in the aftermath of 9/11 “reminds us that in the face of the uncontrollable, we have control over our response,” said Rauch.

The National September 11 Memorial & Museum offers a free interactive program every year on and around the 9/11 anniversary that connects participants with museum staff members and guest speakers to learn about the attacks and the importance of commemoration.