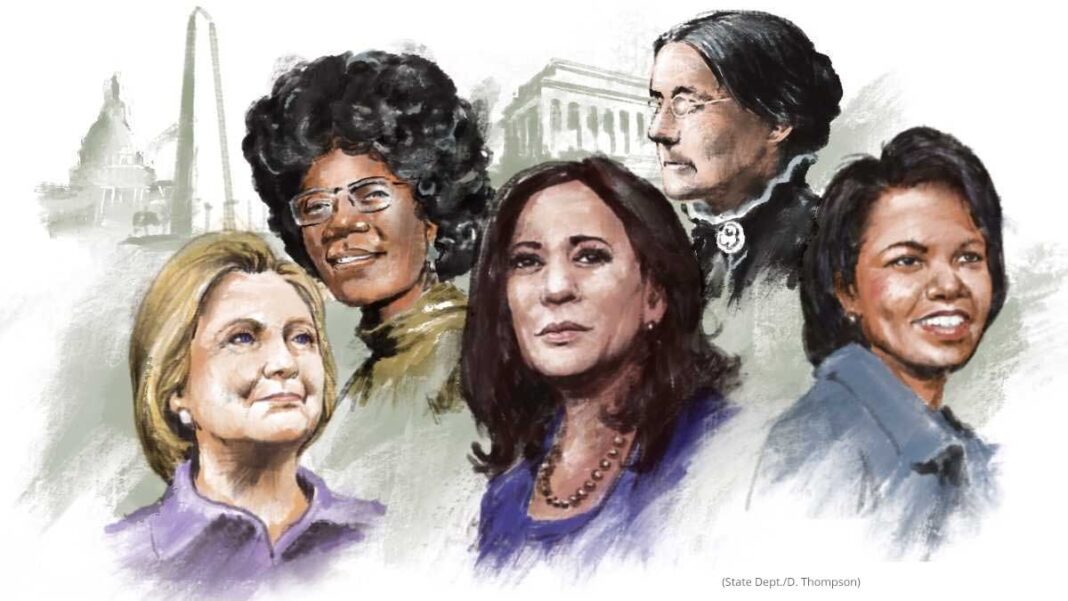 Women in politics: A timeline

1851–1920. Women’s suffrage started out as an anti-slavery movement, with Elizabeth Cady Stanton (right) and Susan B. Anthony leading the way. Women got the vote in 1920.

Getting elected to Congress

1916. Jeannette Rankin was the first woman elected to Congress. Representing Montana, she said, “I may be the first woman member of Congress, but I won’t be the last’’ after her 1916 win.

Serving in the president’s Cabinet

1933. Frances Perkins, secretary of labor under President Franklin Delano Roosevelt, was the first woman to serve in the Cabinet. She was a key player in writing the New Deal legislation, including setting minimum-wage laws.

Walking the halls of both chambers of Congress

1940–1973. Margaret Chase Smith, a Maine Republican who was the first woman to serve in both the House and the Senate, was famous for her “Declaration of Conscience’’ speech against the character attacks of Senator Joe McCarthy.

Securing the right to vote for black Americans

1965. Diane Nash co-founded the student branch of the civil rights movement and worked for voting rights in the South. Using nonviolent strategies, she risked her life to register black women and men to vote, helping gain passage of the Voting Rights Act of 1965.

Making a run for the White House

1972. Shirley Chisholm was the first black female major-party presidential candidate. She said, “My greatest political asset, which professional politicians fear, is my mouth, out of which come all kinds of things one shouldn’t always discuss for reasons of political expediency.”

Making it on the Republican presidential ticket

2008. Sarah Palin was the Republicans’ first female vice presidential nominee in 2008. A self-described “hockey mom,’’ the Alaska-bred Palin also knows how to hunt and field-dress a moose.

2016. Hillary Clinton ran for president as the first female nominee for that office by a major U.S. party. She lost to Donald J. Trump, but inspired a lot of girls and women along the way. Before that, in addition to working as a lawyer, Clinton served as the first lady of Arkansas, the first lady of the U.S., a senator representing New York and the U.S. secretary of state.

Making an impact at the United Nations

2017: Nikki Haley was elected the first female governor of South Carolina when she was just 38 years old. She became the first Indian American to serve in a Cabinet-level position when President Trump selected her as the U.S. ambassador to the United Nations.

2020-2021: Kamala Harris, a U.S. senator from California chosen by Democratic presidential nominee Joe Biden as his running mate, was elected vice president of the United States in the 2020 election and sworn in on January 20, 2021. Harris is the first woman and the first Southeast Asian and African American to serve as U.S. vice president.